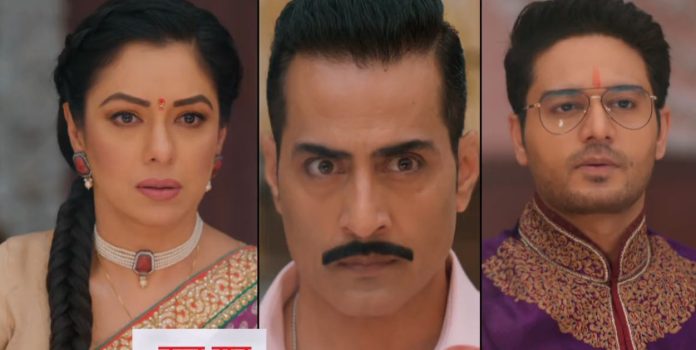 Anupama 5th October 2021 Written Update Vanraj’s new drama Anuj wants a future with Anupama. He gets dreaming of Anupama. Devika wants them to truly unite, because they deserve each other. Anuj gets surprised seeing Anupama, who just gets the support from the well-wishers. Anupama fails to get Vanraj and Leela for the Bhoomi pujan. Anuj likes to spend time with her. Anuj is glad that Anupama doesn’t need his clarification for anything. He realizes that she trusts him. Vanraj is raged at Anupama’s move. Samar pays gratitude that Anuj has paid respect to Anupama, who always deserves to get the best in her life. He asks Anuj to promise that he will never let Anupama stop progressing, even if she wants.

Anuj and Anupama are happy seeing the families bonding. Kinjal compliments Devika for being such a great friend. Anuj and Anupama perform the Bhoomi pujan together, while Vanraj, Kavya and Leela make an entry to cast their unhappiness. Vanraj’s insecurity grows higher seeing Anupama with someone else. He behaves like he owns Anupama since ever. Anuj stays unaffected by Vanraj’s arrival. He doesn’t want to give any importance to Vanraj. Anuj and Anupama leave their handprints on the paper.

Pandit blesses them to have a partnership forever, and they share every joy and sorrow. This blessing irks Vanraj. He angrily takes the papers to wipe off their handprints. The paper sticks on his shirt, leaving the handprints colour on it. Kavya fears that Vanraj may create a new drama.

Vanraj feels insulted by Anuj’s offer to fund his business. He keeps calm for sometime, before planning to confront Anuj and insult him. Anupama is glad to see Leela in the puja. The Bhoomi pujan completes. Anuj and Anupama perform the next rituals to begin their business partnership. Leela finds the rituals a drama and feels ashamed of Anupama. Hasmukh controls Leela against ruining Anupama’s happiness. Vanraj tries to clean the handprints stains from his shirt. His behavior gets shocking for the family. Anupama’s brother Bhavesh gives best wishes to Anuj and Anupama for their new partnership.

Vanraj’s anger gets extreme when Anuj offers him the sweets. Kavya lies that she is happy in Anuj and Anupama’s happiness. Anuj thanks them for coming. Anupama knows Vanraj’s intentions and warns him already about his behavior. The media arrives there to take Anuj’s interview. Kavya asks Vanraj to stop fighting with Anuj, it will ruin their future. Vanraj stays in his ego. Anuj pays respect to Anupama. He lets her handle the media. Pakhi feels proud of Anupama. Pakhi gets straight-forward and questions Anuj if he loves Anupama. She is thankful to him, but adds that she can’t see her family breaking because of Anuj.

Anupama smiles seeing Baa, Vanraj and Kavya at the Pooja. Other people present get shocked. Devika greets Baa “Jai Shri Krishna”, the latter makes a face. She also greets “Hi” to Kavya. Anupama’s brother Bhavesh too reaches behind them. He too greets Baa, in return she also greets him. Vanraj asks Bhavesh about his mother. Bhavesh replies she couldn’t come. Anupama asks Baa to sit in the pooja. Baa, Vanraj and Kavya sit in the pooja. Bapuji asks why they came when they were refusing early. Baa says she came on Vanraj’s saying. Bapuji warns Baa that he will not tolerate any drama by Vanraj today. Panditji announces that Bhoomi Poojan has been completed. He asks Anuj and Anupama to print their hand on a paper and keep that in a file.

Anuj and Anupama print their hands. Baa and Vanraj feel angry. Baa asks what this nonsense is, nothing like this happens in Bhoomi Poojan. Bapuji replies to Baa that nobody shows anger in Pooja. Panditji announces that Anuj and Anupama’s partnership is getting started and they should support each other in successful as well as worrying times. Anuj and Anupama’s handprint flies. It flies and ruins Vanraj’s shirt. This makes him more angry and others shocked. Vanraj tries removing the handprints from his shirt. Panditji returns the handprint paper to Anuj. Kavya wishes that Vanraj may not create any drama. Anupama and Anuj give aarti as well as prasad to everyone.

Bhavesh gets happy seeing Anupama flourishing in her career. He praises Anuj for supporting and helping Anupama. Baa and Vanraj don’t like it. Baa says Bhavesh too joined Anuj’s fan club. Kavya fuels Vanraj’s anger and says Bhavesh didn’t talk to him properly and is behaving so well with Anuj. She further says that Bhavesh is talking to Anuj because the latter is a big businessman. She asks Vanraj to remain silent and calm his anger. Kavya takes aarti from Anupama and prasad from Anuj. She tries explaining the reason for her, Vanraj and Baa’s arrival. She says that they didn’t want anyone to think that they are not happy for Anuj and Anupama’s success. Anuj thanks Baa. Anupama says to Vanraj that she knows he came to say something and warns him to be careful of his behavior while talking.

Before Vanraj could say anything, the media arrives to take Anuj and Anupama’s interview. Bapuji warns Baa to stop Vanraj from doing something foolish. Baa refuses to stop Vanraj and blames him for supporting Anupama. Bapuji says he wants to stop Vanraj because Vanraj is doing wrong. Baa says Anupama is doing wrong too. Bapuji tells her that her love for son has made her blind. Baa asks Bapuji to support Anupama and she will support her son. She challenges Bapuji to try stopping Vanraj in her presence. Media and family records Anuj and Anupama’s interview.

Kavya tries to calm Vanraj. She advises Vanraj to not mess with Anuj as they can use him for their career. Vanraj doesn’t understand Kavya’s words. He fails to calm his ego and says that no one can make a difference to his life. He says that he is just waiting for the interview to finish. Anuj asks the media to ask any project related question from Anupama. This increases Vanraj’s anger. Anuj asks Pakhi if she is liking seeing Anupama this successful. Pakhi says she is feeling proud of Anupama. Anuj sees Pakhi feeling down and asks her the reason for it. Anuj encourages Pakhi to share her feelings with him. Pakhi asks Anuj if he still loves Anupama. Anuj gets shocked as well as surprised with Pakhi’s question.

Pakhi thanks Anuj for helping Anupama grow. She tells Anuj that she knows Vanraj made many mistakes. She also tells Anuj that she just wishes to be with Anupama and Vanraj in the same house. Pakhi says she is being selfish but she just wishes to be with both of her parents in the same house. Anuj tells Pakhi that this is not her selfishness, this is just her love for her parents. Anuj assures Pakhi that he and Anupama are just good friends. He asks Pakhi if she doesn’t feel that her mother needs a good friend. Pakhi agrees with Anuj’s words. Anuj requests Pakhi to never doubt Anupama. He assures that his friendship will not interfere with her relationship with Anupama. He also requests Pakhi to understand and trust Anupama.

Anuj asks Pakhi to be friends with him. Pakhi agrees to be friends with Anuj. Vanraj sees this and gets angrier. Pakhi says her father is not bad. Anuj says people are not bad but time gets bad sometimes. Pakhi thanks Anuj for being understanding. Vanraj angrily calls Pakhi to come to him. Family and Anuj praises Anupama for her successful interview. Vanraj sees Anuj and Anupama with anger. Anupama asks him to speak. Vanraj says he was just waiting for Pooja to get over. Seeing Vanraj’s way of talking to Anupama, Anuj warns him to check his tone. Vanraj in return asks him to watch his words.

Anupama tells Vanraj that she and Anuj can’t do telepathy and thus asks him to clearly express himself. He indirectly taunts Anuj for his way of speaking in a shayari. Anuj asks him to say what he wants to. Vanraj shows everyone the Kapadia company’s envelope. Anupama asks what it is? Vanraj says it may be a bribe or charity. He tells Vanraj Shah doesn’t accept bribes or charity. Anupama tells Vanraj that using his name in every sentence feels awkward and thus advises him to use “i” instead. Anuj says that he alone doesn’t make his company’s decisions. He further says that his juniors and other employees may have liked their proposal and sent them an employment letter.

Anuj says to Vanraj that most of the entrepreneurs either accept or thank the investor for showing interest in their ideas but he is the first who is insulting the investor. Vanraj tells Anuj that he is the one insulting him. GK asks Anuj to calm down. Anuj compares Vanraj’s behavior with models. He asks Vanraj why he submitted his proposal to his company when did not want any employment. Anupama asks Vanraj to talk in the office. Angry Vanraj indirectly insults Anuj and Anupma’s relationship. Anuj and Anupama together shout Vanraj’s name. Vanraj says to them that they proved him right. He says that he didn’t get this investment on his merit. He indirectly tells that Anuj is ready to invest in his idea only to hide his and Anupama’s affair.

Anuj gets angry and asks Vanraj to talk sensibly. Vanraj says that Anuj is ready to invest in his idea to get personal profit. He indirectly says Anuj wants Anupama. In the next episode, Vanraj will tear the AK company’s employment letter and throw it into the fire. He will ask Anuj to have an affair with Anupma secretly or in the open as he likes. Anuj will get angry and shout “Vanraj”. Keep reading.

Reviewed Rating for Anupama 5th October 2021 Written Update Vanraj’s new drama: 3/5 This rating is solely based on the opinion of the writer. You may post your own take on the show in the comment section below.