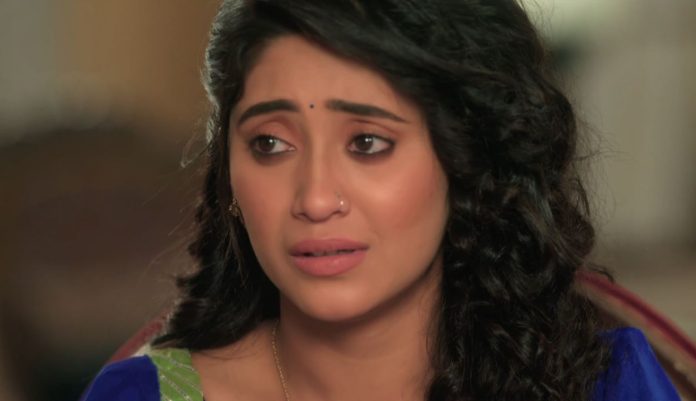 Yeh Rishta 4th October 2021 Update Sirat tagged Stepmom Kartik encourages Sirat to give Boxing a try and that she will surely ace it in the ring. Sirat changes her mind and decides to start her Boxing career again. She is practicing in the ring but misses Akshu and Arohi. Sirat calls up Suwarna and she informs her that both her daughters are taking a nap and not to worry about them. Suwarna advises Sirat to concentrate on her training. Kartik arranges for a coach for Sirat to train her for the Asian Championship.

He introduces her to coach Arvind as her coach is not available and is out of town. Sirat’s coach Arvind wants to see her fitness and stamina and thus asks her to lift weights. Sirat fails in doing so but Kartik motivates her. Sirat finally manages to lift up the weights. Everybody clapped for her. After proving her capability, Sirat starts her practice. Coach Arvind advises her to take it lightly and not burden herself on the very first day. Sirat again gets worried about Akshu and Arohi and calls Suwarna to get an update.

At her practice, Sirat is not able to concentrate anymore and comes home running to meet Akshu and Arohi. Sirat gets the shock of her life when she sees Arohi’s pram fallen on the ground. Sirat loses her cool and shouts Arohi’s name loudly. Surekha, Swarna, and Dadi come running out of the house listening to Sirat’s voice. The ladies ask Sirat why she looks stressed and shouting outside the house. Sirat demands to see Arohi and Suwarna brings Arohi from inside. Sirat is relieved and hugs her daughter. Sirat also wishes to check on Akshu but Suwarna informs her that she is sleeping in her cradle. Sirat informs them that as nobody was picking her calls she got worried and came home to see her daughters.

Suwarna tells Sirat that all three of them were busy performing puja and thus could not receive her call. Surekha once again asks Sirat if she does not find them capable of taking care of her daughters. Sirat informs Suwarna that this experience is new to her and she is not able to concentrate on anything except her daughters. She assures Suwarna that she completely trusts her family but is not able to juggle between the children and her dream.

Suwarna understands her trauma and asks to get her training without any worry in her mind. Sirat admits that she is not able to concentrate and has gone blank. Dadi taunts Sirat about her decision which hurts her. Suwarna comes to Sirat’s rescue and motivates her. Kartik is angry with Sirat for leaving her practice in the middle and coming back home. Sirat explains to Kartik that she is not able to concentrate but he boosts her confidence. Kartik asks Sirat to go all out and make them proud.

Kartik explains to her it is normal to think about daughters the whole day but it is also important to assure oneself that they both are doing well. Kartik says Sirat that he also applies this concept when he gets worried about Sirat and his daughters. Akshu and Arohi give a smile and Kartik tells Sirat that his daughters are more intelligent than their mother. Sirat thanks Kartik and assures him that she will train with dedication and not neglect it again. Kartik feels very happy and calls Sirat his Mary Kom. Sirat punches him playfully but Kartik pretends to get hurt. Sirat asks for apologies but Kartik laughs and she starts hitting him with a pillow. During dinner time Kartik asks Sirat that as she has left eating eggs she should eat Dal, Paneer, and Soya to get proteins.

Arohi starts crying and Kartik goes to make her silent. Suwarna informs Sirat that when she is not around the kids have to get used to Kartik and stop crying. Kairav comes and informs Kartik and Sirat that tomorrow in his school the results of the inter-school debate competition will be declared. The parents of the participants need to be present in the school and that they both have been invited to attend it.

Goenkas ask Sirat to not break the kid’s heart but Kartik is adamant on his decision that Sirat will not miss the practice. With a heavy heart, Kairav agrees with Kartik and says that it is ok if she is not present as the practice is more important. Sirat promises Kairav that she will attend his function at school. Sirat is not able to make it and Kairav gets sad even after winning the trophy. Kairav throws away the trophy in anger and tells them that he will not speak to them.

Reviewed Rating for Yeh Rishta 4th October 2021 Update Sirat tagged Stepmom: 3/5 This rating is solely based on the opinion of the writer. You may post your own take on the show in the comment section below.