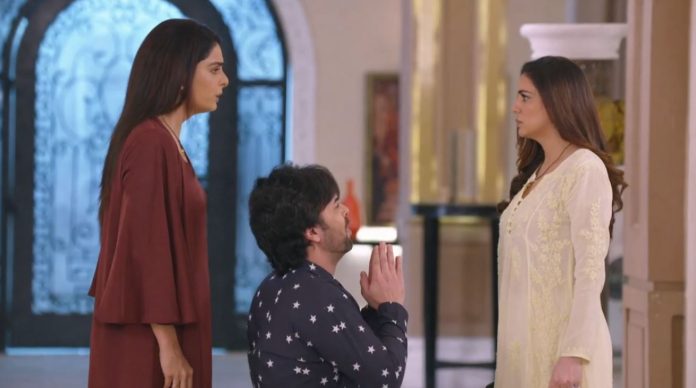 Kundali Bhagya 5th October 2021 Written Update Preeta swears Full Update Preeta tells Sherlyn that Rishabh cares for her, he was worried that he isn’t able to reachout to her, while she is stabbing his back. She adds that both Prithvi and Sherlyn are cheating their partners. She asks them to come with her and answer the entire family. Prithvi asks Preeta to listen to hm once. Preeta tells that she won’t listen to anyone, their sins have crossed the limit, she will tell their truth to Rakhi. She rushes out. Sherlyn asks Prithvi to kill Preeta and stop her to protect themselves. He tells that they can’t kill Preeta. She asks why can’t they kill Preeta, they will get exposed.

She gets mad in anger. She goes to kill Preeta. Prithvi slaps Sherlyn and asks her to get to senses. He tells that he has a way to stop Preeta. Preeta goes to Rakhi’s room. Prithvi and Sherlyn stop Preeta from going on. Prithvi begs Preeta to not tell the truth. He promises to end his affair with Sherlyn and rectify his mistakes. He promises to always be loyal to Kritika. Sherlyn also pleads to Preeta to win her trust.

Preeta rebukes them for their forever lies. Prithvi and Sherlyn ask Preeta to give them a last chance. They make Preeta emotional and remind her how she gave a second chance to Sonakshi, who tried to snatch Pihu from her. Rakhi meets Preeta to know the matter. She asks what’s the matter. She is too tensed. Preeta finds Rakhi worrying so much and doesn’t tell her anything. She hides about Prithvi and Sherlyn’s affair. She tells Rakhi that she wanted to discuss about Kritika’s surprise birthday preparations.

Rakhi tells that she was scared hearing Preeta’s call. Preeta asks Rakhi to go and sleep. She takes Prithvi and Sherlyn in front of Bappa and asks them to swear that they will never cross their lines, stay loyal in their marriages towards their partners, they will break their relation right away. Prithvi and Sherlyn fool her and make a false swear that they will love their deserving life partners, and now continue their affair. Preeta swears that she will expose their affair if they break their promise. She tells that she didn’t forgive them, she will keep a watch on them and will expose their truth once she finds them cheating again.

She adds that she has let them go today because of her concern towards Kritika and Rishabh. She tells how much Kritika respects Prithvi, and Rishabh respects Sherlyn. She doesn’t want Kritika and Rishabh’s hearts to break. She leaves Prithvi and Sherlyn with a warning. She prays to Bappa to protect the family from such evil doers. Meanwhile, Karan finds Rishabh tired. He tells that he used to attend such meetings every day and get too tired. He gives importance to himself. Rishabh laughs hearing his kiddish talks. He tells that Karan’s demands is kiddish, he feels like raising a kid since ever because of Karan.

He adds that he feels happy with Pihu, he just wants to stay with Pihu. He tells that he wants a child in his life. Karan asks him to plan a child. Rishabh shares his feelings about starting a family. Karan asks Rishabh if he will start a family with Sherlyn. Rishabh tells that Sherlyn is his wife, he will obviously plan the family with her. Karan and Rishabh arrive home. Rishabh meets Sherlyn and learns that she was waiting for him. Karan finds strange seeing Sherlyn’s concern for Rishabh.

He gets upset with the sight and goes away. Rishabh asks Sherlyn why didn’t she sleep. Sherlyn acts too sweet towards Rishabh. She doesn’t want him to suspect him. She lies to him that she was thinking to talk to him, she is indeed happy to see him back, she really missed him. She hugs Rishabh and makes an apology for not becoming a good wife for him. She promises to never let him complain. Rishabh reciprocates the hug. Preeta watches them to assure that Sherlyn isn’t lying. Sherlyn knows that Preeta is keeping a watch. She tricks Preeta into believing her.

Karan asks Preeta what’s happening. He tells Preeta that he didn’t have dinner without her, he is still hungry. Preeta adds that even she didn’t dine, they will have dinner together. Karan tells that Sherlyn is behaving strange. Preeta wants to give a chance to Sherlyn and not tell anything to Karan. She knows that once she tells Karan, he will lose temper and rush to Rishabh, Karan will spoil Sherlyn and Rishabh’s relation instantly. Karan and Preeta have food and land in a romantic moment. Rishabh melts heart for Sherlyn. He feels hesitant to talk to Sherlyn. She asks him to say it.

He tells that she is his wife, he should share his thoughts. Kritika finds Prithvi disturbed. He shows his care. He tells that he will put her to sleep. He compliments Kritika to clear her doubts. She asks him what is he planning. Rishabh tells Sherlyn that they got married in strange circumstances, he wasn’t sure about her if she is a right life partner for him, but things have changed with time.

He feels mature that he is planning a family. He adds that his decision to marry Sherlyn was right, she has always handled the family in his absence, she has given him space and never troubled him, she has changed his thinking. He thanks her for being so understanding and looking after his family. He expresses his feelings to Sherlyn. Sherlyn doesn’t want Rishabh’s love. His confession makes her tensed.

Reviewed Rating for Kundali Bhagya 5th October 2021 Written Update Preeta swears: 4/5 Finally some relief from tensed plot This rating is solely based on the opinion of the writer. You may post your own take on the show in the comment section below.