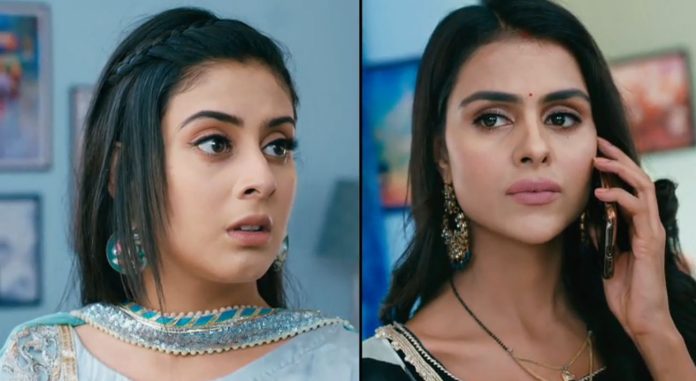 Udaariyaan 6th October 2021 Written Update Showdown Fateh praises Tejo as an amazing teacher, who would never risk a student’s future for anything. He has proved Tejo innocent and also saved her from the humiliation. He wants to win back Tejo’s friendship. He is upset that Tejo has once again turned down his friendship appeal. He wants to comfort Tejo’s sorrow as a friend, if he can’t be her life partner. Tejo doesn’t want Jasmin to misunderstand Fateh because of their friendship. She keeps him away for obvious reasons. Fateh doesn’t tell Tejo’s huge problem to Jasmin.

He leaves Jasmin upset by his kind gesture to help Tejo. Jasmin is very sure that she won’t be caught by anyone. She thinks the cyber cell won’t be able to reach her. Tejo doesn’t want to spare Jasmin knowing the big crime. She wants Jasmin to get punished for risking the future of so many students. She doesn’t think Jasmin should harm anyone in their personal fight. She regrets that Jasmin is her sister.

Tejo still keeps the respect of their sisterly bond and confronts Jasmin in private. Jasmin is much tense when Tejo confronts her for leaking the accountancy question papers on the internet. Tejo shocks her by revealing that she has informed the cyber cell about her crime. She scares Jasmin further to hear her confession.

Ahead in the show, Jasmin runs after Candy, who breaks a family picture. He tells Jasmin that the same picture is in his house, Fateh is Simran’s old friend. Jasmin gets confused hearing this. She suspects that Tejo is lying to the family about Candy’s mother. She asks Tejo about her collegue, who is Fateh’s old friend. Tejo asks her not to bother her with such questions. Jasmin tells that its important for her to know about Candy’s mother. Tejo doesn’t want to give any chance to Jasmin to create a new drama in the family. How will Tejo protect Simran and Candy’s truth until the family accepts them heartily? Keep reading.

Jasmin acts innocent in front of Tejo. Tejo confronts her for leaking the papers. Jasmin gets stressed. Tejo asks her to answer, why did she try to defame her and ruin her career. She knows Jasmin plans such evil. Jasmin denies the plans. Tejo tells that she has a proof for Jasmin’s crime. She adds that Candy got the pendrive in her room. Jasmin gets angry on Candy. Tejo gives her a tight slap to bring her to senses. She tells Jasmin that her mistake isn’t a mistake, but a crime.

She rebukes Jasmin for stooping so low, for ruining the students’ hard work and future. She tells that the money doesn’t come for free, one has to work hard to earn money. She asks Jasmin to save whatever she has. She tells that Fateh should know her truth before he comes on road. Jasmin asks her to shut up. Tejo tells that cyber cell will not spare Jasmin if her complaint reaches. She gives a final warning to Jasmin and asks her to stop such evil things, else she will land behind bars. Jasmin feels insulted after receiving the slap. Candy waits for Tejo. He feels hungry. He reaches Jasmin and finds her eating a chocolate. He asks her for the chocolate.

Jasmin hates him for bringing her plan out. She angrily scolds him. He runs away with her chocolate. Jasmin runs to catch him. He reveals about the family picture, which he has seen at his place also. Jasmin learns that Candy has some connection with Fateh and family. Tejo gets the snacks for him. She sends away Candy. Jasmin questions her about Candy. Tejo doesn’t think Jasmin needs to know anything. Jasmin tells that its important for her to know, because Candy told her that Fateh is his mum’s friend. Tejo asks her to spare Candy from her evil plans. Jasmin realizes that Tejo is hiding something.

Fateh meets workers at the academy, who ask him to clear their payments without any delay. They add that even Tejo isn’t at the academy these days. Fateh asks them to submit the bills first and then payments will be made. The men tell him that they have already submitted the bills. Fateh checks for the bills. He check the pending bills file. He realizes Jasmin’s blunder. He apologizes to them and tells that he will get the bills cleared. The man taunts him about handling two women in his life.

Jasmin gets decked up to attend Soni’s engagement. She informs Sweety that Fateh isn’t answering her calls, she is waiting for him. Sweety tells that Fateh is busy, he is still the same, he used to make Tejo wait all the time. Jasmin doesn’t want Fateh to treat him badly like he used to treat Tejo. The man taunts Fateh for cheating his wife. He praises Tejo who never missed any work. Fateh gets insulted. He rages that Jasmin didn’t do any work. He goes home to confront Jasmin.

Jasmin yells at him for ignoring her calls and making her miss her friend’s engagement. She asks him if she is important to him. He asks her why didn’t she do the work in the academy if she wanted to help him. Gurpreet and Nimmo hear their argument. Fateh accuses Jasmin for not doing any work. Jasmin cries and blames the family, especially Tejo, who will be trying to get close to him. She asks him not to blame her. She tells that he just finds her useless. She refuses to go to the academy with him. She asks him to take Tejo along with him. Jasmin leaves in anger. Fateh is fed up of the drama.

Gurpreet pities Fateh. Nimmo tells that Fateh will know Jasmin’s truth first. Tejo learns the matter. Gurpreet tells that husband and wife support each other in a marriage, that’s the test of love. Fateh realizes his mistake of making Tejo quit the academy work. Later, the Virk family enjoys their time with Candy. Fateh finds the family happy after a long time. Candy makes everyone dance. He asks Fateh to dance with them. Fateh also gets a smile seeing the cheerful boy. He dances with Candy.

Candy brings Fateh and Tejo together. This irks Jasmin, who stays away from the family. Khushbeer asks Candy not to go anywhere, and stay with them. Tejo tells that she has to take Candy to his mum. Candy also wants to stay with them. Fateh asks him to stay when Tejo gets permission from his mum. Jasmin decides to follow Tejo and find out Candy’s mum. Tejo spies on Tejo and finds Tejo meeting her friend Deepti. She asks Deepti to drop Candy to Buzo at the Gurudwara. Tejo knows Jasmin is following her. She doesn’t take Candy to Simran, just to end Jasmin’s growing doubt. Tejo goes to meet her parents.

Jasmin doesn’t get any information as she wanted. Tejo asks the family why do they look worried. She tells that she is okay, she wants them to pamper her. Tejo tells Rupy that Virk family looks after her and loves her. He wants her to live a good life by making a new start. He asks her to return home. He tells that she will come back when the right time comes. She goes to her room to get her college certificates. Tejo comes across Rupy’s burnt passport. She finds Jasmin’s passport and catches her lie. She realizes Jasmin has burnt it to fool Fateh. What will Tejo do next? Keep reading.

Reviewed Rating for Udaariyaan 6th October 2021 Written Update Showdown: 5/5 This rating is solely based on the opinion of the writer. You may post your own take on the show in the comment section below.