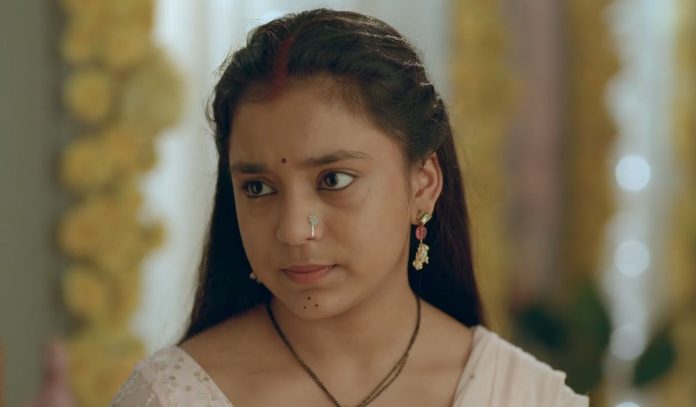 Imlie 6th October 2021 Written Update Imlie’s prank Anu taunts Imlie that now Malini and Aditya are together and she cannot do anything about it. She also says that Malini and Aditya will always live together. She further taunts Imlie that she doesn’t care about her and Meethi. Imlie thinks Anu didn’t learn her lesson even after spending time in prison. She thinks of teaching Anu a lesson on her own. Imlie wakes up and Anu goes behind her. Malini coughs due to havan’s smoke. Sundar says he will do as discussed. Anu wonders what Imlie is planning. She hears Imlie and Sundar discussing magic from her village. Sundar sees Anu and tell her how Imlie can make someone invisible.

Anu says she is not fool to believe all this. Imlie says Anu got scared. Sundar too says the same thing. Both Sundar and Imlie make Anu sit. Imlie performs some magic on Anu using mantras. Anu says they did what they wanted. She asks Imlie how she feels becoming a fool. Sundar pretends to be stunned by Imlie’s magic. Anu still doesn’t believe them. Both Imlie and Sundar pretend that they cannot hear or see Anu. Anu tries talking to them and asks what they mean by calling her ‘chant lugaai’/clever wife. Sundar brings Nishant and asks him how many people he can see in the room. He says he can only see him and Imlie.

Anu asks Nishant can’t he see her. Nishant pretends and asks Sundar why he is asking silly questions. All three ignore Anu. Anu pushes Nishant and he pretends to wonder who pushed him. He asks who pushed him. Sundar tells Nishant that Imlie made Anu invisible using magic mantras. Nishant asks what mantra. He further asks what they will tell others if they find Anu missing. Nishant and Imlie pretends trying to make Anu visible again. They make Anu believe that she cannot be seen in photographs. Anu gets shocked and wonders why can’t she be seen in clicked photos.

Anu runs tensed. Nishant, Imlie and Sundar laugh on seeing Anu tensed. A tense Anu gets shocked on seeing that she is not even visible in corridor mirror. She gets scared that she cannot even be heard. Rupi too pretends to not be able to see Anu and runs away scared. This makes Anu more scared. Nishant, Imlie, Sundar and Rupi enjoy seeing Anu scared. Sundar removes a transparent sheet from the mirror and everybody laughs. Anu goes to Nakli Nani and asks her if she is visible or audible to her. Malini’s health deteriorates but she refuses to leave Pooja to stop Aditya from going on a date with Imlie.

Anu gets irritated with Nakli Nani’s antics. Nakli Nani recites Hanuman Chalisa and scares Any away. Imlie, Nakli Nani, Nishant, Rupi and Sundar laugh and give a high five to each other. Scared Anu reach Tripathi’s and Dev. She asks them if they could see or hear her. Everyone asks her to be silent. Pooja gets ruined and everyone asks Anu what happened. Malini gets angry and asks Imlie, what she did to her mother. Imlie says she just did a joke with Anu. Angry Malini asks her if she is joking between a pooja kept for the upcoming baby.

Malini’s health deteriorates but she refuses to leave the pooja. Panditji says they can’t continue the pooja as it got breached in between. Malini gets angrier. Her health deteriorates and she faints. Imlie calls Malini’s doctor and gets shocked to know that Malini should have not sat in Pooja as she has Asthma. Anu snatches the phone from her and calls the doctor home. Imlie wonders why Malini is putting her unborn child’s life in danger. Tripathi’s care for Malini, Radha says the doctor should have told them to keep Malini away from smoke. Malini thinks she can handle 100 Asthma attacks to keep Aditya away from Imlie.

Nishant advises Aditya to be with Imlie as Malini has many people to take care of her. Aditya goes to talk to Imlie. He asks Imlie for a dinner date. Malini interrupts them and calls Aditya for dinner. Aditya feels stuck between Imlie and his upcoming child. Imlie thinks to teach a lesson to Pandit Ji. Imlie doesn’t let Pandit Ji take his fee (Dakshina) for performing Pooja. Imlie asks him to prove that he is a real Pandit. In the next episode, Aditya will ask Imlie to come with him. Imlie will refuse to do so. Nakli Nani will try to stop her but she will leave disappointed with Aditya for not trusting her.

Reviewed Rating for Imlie 6th October 2021 Written Update Imlie’s prank: 3/5 This rating is solely based on the opinion of the writer. You may post your own take on the show in the comment section below.