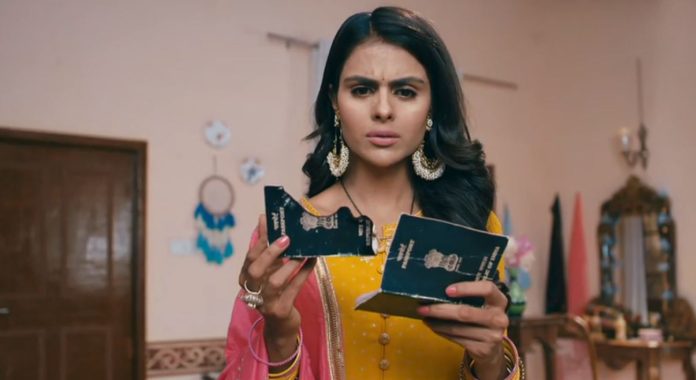 Udaariyaan 7th October 2021 Written Update Secrets out Tejo gets rid of Jasmin’s doubts with her smartness once again. Another revelation gets known to Tejo. She learns that Jasmin has plotted a big game to win Fateh’s heart by fair and unfair means. She realizes that Jasmin’s love was never true for Fateh or anyone in the family, else she would have not burnt their father’s passport. Rupy wishes Tejo to live a good life, by forgetting Fateh and Virk family. He wants her to always stay happy. He asks his daughter to return home.

Tejo wants to know about the passport chapter. She knows half of the truth already. She connects the dots to realize that Fateh told her about Jasmin abandoning her Canada dreams just for the sake of his love. Tejo has already hidden about Jasmin’s crime of leaking the exam papers from Fateh. She gave her a last chance. She was hoping that Jasmin will not plot anything else. She realizes that there is more to know about Jasmin’s evil games.

Jasmin follows Tejo once again and finds her with Simran. She realizes that Candy is Simran’s son, Tejo wants to unite Candy with the family, and that’s why she is bringing him home. She tries to leave from there, but gets spotted by Tejo, Simran and Buzo, because of a water pot falling there.

Jasmin wants to rush home and tell Tejo’s truth to the family, how Tejo is cheating Khushbeer once again by hiding the truth of Simran’s son. Both Tejo and Jasmin hold one secret of each other. Who will expose whom first? What do you think should happen next? Who should Fateh support knowing their secrets? Tejo is doing everything for the family’s sake, with a good intention of uniting Simran with Virk family, while Jasmin has an evil intention to get Tejo thrown out of the family. Comment your views below. Keep reading.

Tejo asks Rupy about his burnt passport. He reveals that Jasmin had burnt it to break her marriage with Gippy. Tejo is shocked to realize it. Jasmin wants to know about Candy. She isn’t convinced. Fateh hugs her and makes an apology. She tells that she can see him enjoying with the family and even Candy, while he loses his mind when he comes to her. She asks him if he is happy with his friend Tejo. She gets jealous. He laughs on her kiddishness. She tells that Candy is cute like her.

She informs him that Candy told her that he has their family picture in his house, he knows Fateh well. He tells that kids can say anything. She asks how did he get so attached with Candy. He tells that he is attached to her. He gifts her beautiful earrings. Jasmin gets too happy. Tejo asks the reason that Jasmin didn’t burn her own passport, and gave the new passport to Fateh. Rupy tells that its Jasmin’s madness.

Fateh and Jasmin have a romantic moment after a long time. They dance and appear really happy together. Tejo tries to understand Jasmin’s motives. She knows Jasmin is very clever. Gurpreet is glad to see Fateh happy. Tejo hears them talking about Candy. He tells that Khushbeer loves Candy a lot. Gurpreet tells him that she regrets that he chose Jasmin, else Tejo would have given them a grandchild till now. Tejo gets upset. Gurpreet asks Fateh not to leave them and go to Canada. Fateh tells Gurpreet that Jasmin has changed a lot, she has become sensitive now. Tejo wants to stay away from their matter.

She goes to make tea. She asks Fateh about his feelings. She reminds that he really wanted to forget Jasmin and move on in life, then why did he change his mind and decide to go back to Jasmin. Fateh tells that he had loved Jasmin since ever, he can’t forget her, the drama she did on the wedding day, it broke his heart, he wanted to move on and make their marriage successful, but Jasmin did something that he believed her love again, she burns her passport, her Canada dreams, just to stay with him.

Tejo speaks to Simran. Jasmin spies on her to find out who is Urvashi. She copies the number to find out. She shares Tejo’s live location on her number. She wants to soon find out where will Tejo go. Fateh gets glad seeing Jasmin working in the academy. He thinks she has realized her responsibility. Jasmin sees Tejo’s location changing from the college and moving towards the highway. She follows Tejo. Candy tells that he wants to stay with Tejo at her house. Tejo tells that she can’t take him today, she has some work. Candy gets upset. Tejo tells Simran that Jasmin is suspecting Candy.

Jasmin reaches Simran’s house and finds Tejo with Simran and Buzo. Candy calls Simran as mumma and hugs her. This shocks Jasmin. Jasmin recalls Khushbeer’s wrath over Simran. She wants to expose Tejo’s deed by using Khushbeer. Jasmin gets spotted by Tejo, who runs after her to stop her. Tejo catches Jasmin and criticizes for following her. She asks Jasmin what is she planning now. Jasmin taunts her on her plottings and lies. She tells that she came to check about Candy. She threatens that she will expose her game and have fun. She scares her of Khushbeer’s anger. She laughs on Tejo.

Reviewed Rating for Udaariyaan 7th October 2021 Written Update Secrets out: 4/5 This rating is solely based on the opinion of the writer. You may post your own take on the show in the comment section below.