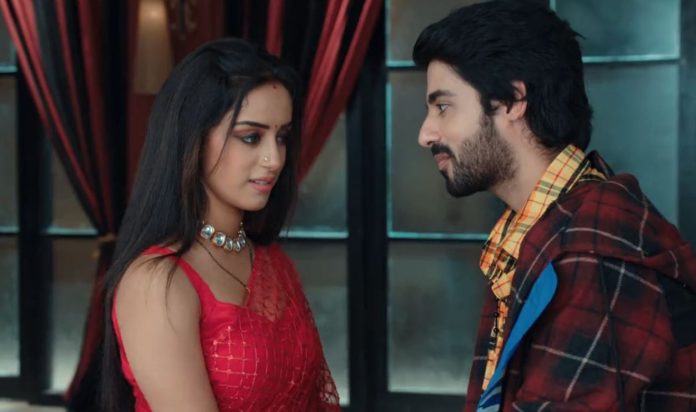 Yeh Hai Chahatein 6th October 2021 Written Update Surprising Armaan collides with Sharda after taking his camera which he hid in Rudraksh and Prisha’s room. Sharda asks him what he is doing in her home. He again uses Anvi’s name and tells he came to pick Anvi. Sharda asks him how he entered her house as she didn’t hear any doorbell. He lied that the main door of the house was open and he came. Armaan says to Sharda, that he thinks she didn’t like him coming. Sharda gets confused. Anvi interrupts their conversation. Armaan tells her that he came to pick her. Anvi agrees to leave and says that she doesn’t want to be with Saaransh as he troubles her a lot. Armaan asks her to not say like that.

Armaan leaves with Anvi. Sharda thinks that she closed the main door properly. She thinks she should alert Rudraksh about Armaan entering their house secretly. Rudraksh and Prisha return and the former hugs Sharda. They give Sharda the good news about Rudraksh doing a concert soon. Sharda kisses Prisha’s forehead and calls her lucky for their house. Rudraksh too says the same thing. Prisha leaves to see Saaransh. Sharda stops Rudraksh and tells him about Armaan. She tells him how Armaan is secretly entering their house and lying. She further tells Rudraksh that his doubt on Armaan is right. Sharda says to Rudraksh that Armaan is trying to create problems between him and Prisha and will continue doing that.

Rudraksh feels angry, when Sharda tells him that Armaan is lying again and again as well as secretly entering their house. Angry Rudraksh says that he will not forgive Armaan and tries leaving for Armaan’s house. Sharda stops him and explains to him that he cannot expose Armaan so easily. Rudraksh stops and agrees to expose Armaan with proof. Sharda too agrees to him and asks Rudraksh to be careful as Prisha has a lot of faith in Armaan. Sharda and Rudraksh’s conversation get interrupted by Mr. Ahuja. Mr. Ahuja congratulates Rudraksh for getting a concert. He asks him to prepare fast as he has only 4-5 days left for the concert.

Sharda, Rudraksh and Prisha feel happy hearing that Rudraksh got a contract to perform in a concert. Prisha makes Rudraksh and Sharda have sweets and congratulate them. Mr. Ahuja leaves saying that fans are waiting for Rusha (Rudraksh/Rudra and Prisha). Advocate Mishra arrives and informs Rusha that they got legal custody of Saaransh. Rusha sees each other with love. They feel that now no one can separate them from Saaransh as per court orders. Advocate also tells them they are the owner of Saaransh’s properties and trust fund till Saaransh turns 18-year-old. Advocate leaves and Sharda blesses Rusha. Rudraksh informs Prisha that he planned a date for them on the terrace. He asks Prisha to be ready for his big surprise.

Armaan and Sanya discuss that Sharda may doubt Armaan entering Khurana house secretly. Armann gets happy when Anvi’s teacher informs him about his daughter’s good results. He tells Sanya that he will lie to Prisha about Anvi’s result and be near Prisha through Anvi’s studies. Prisha brings gifts for Saaransh and Anvi. Sharda praises Prisha for treating both kids equally. Prisha explains that both Saaransh and Anvi are special to her. Armaan comes to Prisha and lies to her about Anvi’s results. He tries to manipulate Prisha by asking her to help Anvi with her studies. Armaan thinks he got successful. He goes behind Anvi and Prisha.

Prisha informs Saaransh that Anvi will study with him. She tells kids that she will give a gift to them, if they perform better in her test. Armaan gets scared that through the test Prisha will know that Anvi didn’t get bad results. Armaan asks Prish to go and work, he will look after the kids. Prisha leaves and Armaan gets scared seeing Anvi writing all the answers correctly. He thinks this way Prisha will reach the truth and he will not be able to meet Prisha through Anvi. He thinks to keep Anvi close to Prisha to keep Rudraksh away from her.

Armaan sends the kids to Prisha and changes Anvi’s answers. Kids return with Prisha. Prisha gives Saaransh his gift after seeing his correct answer sheet. She asks Anvi if she isn’t studying as all her answers are wrong. Prisha asks Anvi to learn from Saaransh, how to study even after facing a lot of problems. Anvi calls Saaransh a cheater. Both kids fight. Anvi gets angry at Armaan and Prisha for not trying to understand her. Saaransh makes fun of Anvi. Rudraksh consoles a crying Anvi. Prisha tells Rudraksh that Anvi is misbehaving and not studying properly.

Prisha and Armaan say that they will not forgive Anvi if she doesn’t perform well. Anvi leaves their home crying. Rudraksh decides that their date should not be interrupted by anyone and they will help Anvi too in her studies. Armaan overhears them and thinks to not let Rusha’s date happen. Prisha goes to meet Anvi at Armaan’s house to give her the gift and apologize to her. Armaan didn’t let her meet Anvi and asked her not to feel guilty. He makes her leave saying he will give her a gift to Anvi. Armaan breaks Prisha’s gift for Anvi. He decides to not let Anvi know that Prisha loves her a lot. He thinks of using Anvi again for ruining Rusha’s date.

In the next episode, Sanya will go to Khurana Mansion and inform Prisha about Anvi having a high fever. She will also tell that Anvi is again and again taking Prisha’s name. She will take Prisha to Anvi. Prisha will ask Armaan why he didn’t inform her earlier. He will say that he didn’t want to trouble her. Sharda informs Rudraksh and Prisha that Saaransh is missing.

Reviewed Rating for Yeh Hai Chahatein 6th October 2021 Written Update Surprise: 4/5 This rating is solely based on the opinion of the writer. You may post your own take on the show in the comment section below.