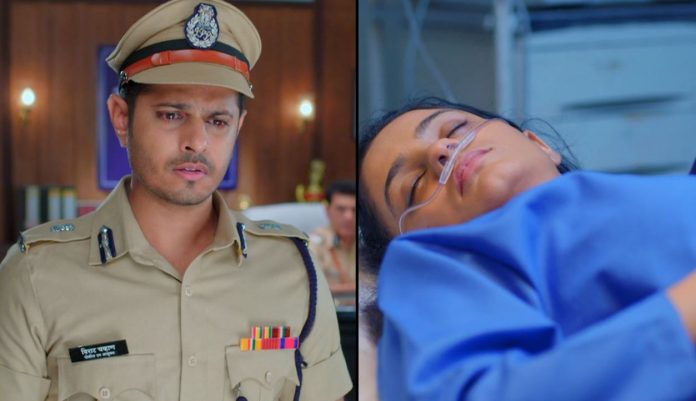 Ghum Hai Kisi Ke 6th October 2021 Written Update Virat meets Sai Devi Tai, Samrat, Ashiwini and Pakhi are seen in a hospital. Devi blames herself for helping Sai run away from home. She says that Sai would have been okay, if she would have not helped Sai. Pulkit tries comforting Devi. She tells everyone that she told Virat to stop Sai, but he didn’t take her words seriously. She says she should have told someone else. Devi further says that she should have told Ashiwini, she would have never let Sai leave.

Shivani tries comforting Ashwini. She says to Devi that she would not have been able to stop anything. On the other side, Virat gets shocked on knowing about Sai’s accident. His senior asks him what happened? Virat tells him about Sai being in a critical condition in hospital. Senior says they should go to Sai immediately. Virat falls down while leaving, Seniors ask him to be strong. Senior sends one of his juniors to reach the hospital and handle the formalities of Virat’s wife till Virat reaches there.

A Tense Devi asks the Doctor about Sai’s condition. Samrat apologizes to him. Devi feels bad and says everyone always shuts her. She asks if anyone cares about Sai? She asks why Virat didn’t stop Sai, why did he let Sai go? Shivani asks Devi to talk about all this after Sai gets well. Devi asks if Sai would never get well. This shocks everyone. Sunny asks Devi to have faith in doctors. Ashwini too asks Devi to pray to God for Sai’s well-being as well as her return to Chavan house. Devi says she will never let Sai return to Chavan house ever. She says now she will not shut even if her mother asks her to.

Devi blames Pakhi and Virat for Sai’ condition as well as her decision of leaving Chavan house. She tells everyone that she tried to make Virat understand to stop Sai, but Pakhi came in between the brother-sister’s conversation. She says that Pakhi didn’t let Virat hear her fully. Pakhi asks Devi to not create drama. She says to Devi that she is saying anything she likes to say. Devi asks her to shut as she is talking to her brother (Samrat). Pakhi asks Devi to shut and says that she doesn’t know what was going on between Virat and Sai, as she doesn’t live in Chavan house.

Pakhi further says to Devi that Virat asked her to not interfere between him and Sai, didn’t she understand that. Devi asks Pakhi then why she was interfering in Sai and Virat’s matter, did Virat ask her to? Nurse from behind asked them to shut as they were in a hospital. Samrat asks Pakhi to behave maturely and shut down. Sunny asks Devi to please be silent. Devi refuses to shut down. Devi asks Pulkit to save Sai. She again blames Virat for Sai being hurt. Shivani asks Devi to understand that she is partly right but nobody can be blamed for Sai’s accident.

A person comes to them and tells Virat that Virat’s senior (DIG Sir) sent him. Samrat says they will call him if they require any help. Ashwini prays to God for Sai’s well-being. Doctor asks for Virat as they only need Virat’s (Sai’s husband) signature. Virat reaches the hospital. Sai’s friends see him and discuss that something bad may have happened with Sai in her in-laws’ house that is why she made the decision to leave home and college. They restrict Virat from meeting Sai. This shocks Chavans. They tell Virat that they will not let Virat go near Sai as he lost his rights on Sai.

Sai’s friend brings Sai’s doctor. Doctor tells Virat that they waited for signatures as there are only 50% chances of Sai’s survival. He tells Virat that if something happens to Sai during surgery, the hospital will not be responsible. Virat signs the papers. Dig Sir, tries to change Sai’s friend’s opinion about Virat and leaves. Devi tells Virat that he is responsible for Sai’s condition. She asks why he didn’t stop Sai. She asks why did he listen to Pakhi when she was talking ill about Sai. Devi asks Virat and Pakhi if they are happy seeing Sai’s condition. She also restricts Virat from meeting Sai. She says to Virat that he will never be able to forgive himself if anything happens to Sai.

Devi says to Virat that she used to love and respect him always. She further tells him that he is even worse than Pakhi. She says she will never forgive him. Pulkit blames Virat for Devi’s condition after Sai’s accident. Samrat and Pulkit send Devi home with Sunny. Virat prays to God for Sai’s well-being. He promises to God that he will go away from Sai and will never hurt her again. Ashwini asks him to pray only for Sai’s well-being and not even think of going away from her. She explains to him whenever they tried to go away from each other, one of them landed in big trouble. Virat recalls what ever happened when he and Sai went away from each other.

Both Ashwini and Virat pray for Sai’s well-being. Virat tells Ashwini that he is going to get medicines the doctor asked for Sai. He asks her to be outside O.T. and call him for any help. Pakhi asks Virat to be strong and have faith in doctors. Virat tells her that he doesn’t want to lose Sai. Pakhi tries comforting him and tells that Sai will be alright soon. Virat realizes his mistake for hurting Sai.

Pakhi once again tries instigating Virat against Sai. She asks him to not blame himself for whatever happened as it was Sai’s mistake. Virat says even last time when he blamed Sai for inviting Ajinkya and Sai met with an accident he was wrong. He feels this time also he was wrong somewhere. He thinks to do whatever he can to save Sai.

In the next episode, Samrat will see Virat crying with Pakhi’s hands in his hands. He will say, only this was left to see. Pakhi tries explaining to him that she was just comforting a tensed Virat. Samrat will taunt them saying that earlier in the cafe, Virat was comforting Pakhi and now Pakhi is comforting Virat. He will clap. Pulkit will tell Samrat that the hospital needs blood for Sai. He will refer to Samrat as the only family of Sai and will ask him to arrange blood for Sai as soon as possible. Keep reading.

Reviewed Rating for Ghum Hai Kisi Ke 6th October 2021 Written Update Virat meets Sai: 4/5 This rating is solely based on the opinion of the writer. You may post your own take on the show in the comment section below.