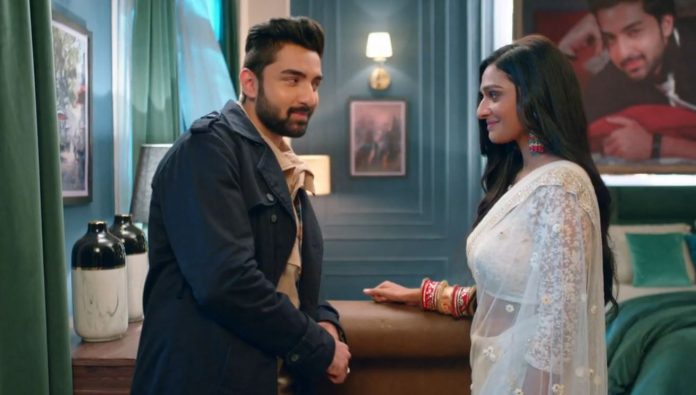 Bhagya Lakshmi 7th October 2021 Written Update Amazing Rishi tells Karishma that yes it happens in TV serials that a village girl only saves her husband from such allegations. But this is reality, it doesn’t happen in reality but still, Lakshmi did it. Malishka is unable to bear Rishi praising Lakshmi. Rishi says that Lakshmi took this step for him. He is aware that she is from a village, not a city girl but knew that he was tense because of false allegations made by a girl on him. Rishi says that Lakshmi did not care about the city or people and went ahead to save him and thus they all should thank Lakshmi for her step. Neelam, Karishma, Sonia, and Malishka leave in anger.

Virendra praises Lakshmi. Dadi asks Lakshmi to forgive her as she too blamed her. Lakshmi takes Dadi into her room. Rishi hugs Aayush and thanks him for supporting Lakshmi. Shalu calls Rishi and asks about his well-being and requests him to not scold Lakshmi. Rishi assures her that Lakshmi was not wrong but the other person was. He tells Shalu to not worry about Lakshmi as he is with her. Rishi promises Bani and Shalu to always stand by Lakshmi. Bani calls Rishi the world’s best brother-in-law and tells that she will give him a hug next time they meet.

Virendra tells Neelam that Aayush took a great stand for Lakshmi today. They used to feel is still a kid but his thoughts are very big. He says that Aayush spoke the truth that Lakshmi forgot her own self to save Rishi and that is why she is special. Neelam taunts Virendra about the class in his blood and goes to sleep. Lakshmi comes in to keep water and feels bad that Neelam is speaking harshly with Virendra.

Neelam leaves the room. Lakshmi looks sadly at Virendra and wishes him a good night. Malishka is walking in stress and Karishma asks her to do something as Rishi has changed. Malishka asks Karishma to control Aayush because he is taking too much of Lakshmi. Sonia says that Aayush does not listen to anyone and will only do what his heart says. She assures Malishka that Aayush knows that Rishi loves her and eventually he is on her side. Aayush tells Aahana that he is only on Rishi’s side and not Malishka’s.

Aahana is happy that Aayush took Lakshmi’s side today but he tells her that he did not take her side in fact she is supporting Rishi a lot. Aayush tells Aahana that Lakshmi is perfect and has made Rishi her world. She is ready to do anything for him and has selfless love for him. Rishi is listening to their conversation and gets moved.

Aayush says that Rishi has no idea how lucky he is to get a girl like Lakshmi in his life. Aahana also assures Aayush that she believes the same. Malishka says that Aayush is not on her side but with Lakshmi. Karishma tells her to relax as it is not true. Malishka gives a guarantee to Karishma that Rishi does not love Lakshmi but only her. In fact, she has already taken a test from him. Malishka tells them that she tried to commit suicide from Rishi’s office but he came in time and saved her and that is why Rishi only loves her.

Malishka assures Sonia and Karishma that Rishi does not like Lakshmi and is only playing his part because she told him to do so. She asks them to stop worrying about her as Rishi will never like Lakshmi. Rishi is flooded with Aayush’s words in his mind and goes into his room. Lakshmi is tensed and Rishi asks her what is the matter. Lakshmi says nothing is wrong as she is just trying to search for a headache medicine. Rishi tells her that all his family members were asking her questions and he did not get the time to ask her anything.

Rishi says to Lakshmi that she was not required to go to Shanaya’s house. Lakshmi says that she could not stop herself as she had accused him of such a big crime and she wanted to bring out the truth. Lakshmi says that she made a big mistake and because of her his image got ruined further. Rishi accepts that his image is getting spoiled and Lakshmi’s destiny is bad that she found him but Rishi’s destiny is very good that he found Lakshmi. He reveals to Lakshmi that she always used to tell him that she was lucky to have him in her life but now people are saying the opposite. Rishi praises Lakshmi for fighting the world and trusting him. Rishi says that he was precious to her now she is precious to him. Lakshmi starts crying and tells Rishi that her father also used to speak like him.

Rishi asks Lakshmi what her father used to tell and she says that he used that he doesn’t lie till it is the question of life and death. Lakshmi says that today she is missing her father a lot. Lakshmi puts her shoulder on Rishi and cries her heart out. Rishi pacifies her. Rishi is getting troubled by Malishka and Lakshmi’s love for him. He tells Lakshmi to not cry like this as her father will not like it. Rishi wipes her tears and asks her to keep smiling always. Neelam is not getting sleep as she is troubled by Aayush’s words that they did not do anything for Rishi.

Virendra asks her to sleep but Neelam says that till Rishi’s image is not cleared she will not be able to sleep. Neelam and Sonia go to meet Shanaya and offer her 50 lakhs to take back her case as she doesn’t want her son to go to court. Rohan is on the call with Shanaya and tells her to call them inside. Rohan asks her to make them wait and check the cash. He asks her to not let them understand that she is talking to him. Shanaya goes crazy seeing the cash. Rohan reads about the Oberois and finds out that they are the richest family in town.

Shanaya tells Rohan that it is 50 lakhs and she is taking them. Rohan tells her that they are a super-rich party and refuse the money and they will offer 1 crore. Shanaya refuses to take the money as it is less. Neelam offers her double the money. Rohan asks her to refuse that too. Neelam offers 2 crores but Shanaya says that she doesn’t need money but only justice. Neelam threatens Shanaya that Rishi is right and he will get justice but after that, her condition will be very bad.

Rohan reaches home and Shanaya shouts at him for making her refuse 2 crores. Rohan tells her to ask for more than 200 crores after Rishi’s arrest. Her life should be over but not the money. Shanaya asks Rohan how Rishi will get arrested as he is out on bail. Rohan cunningly smiles. What is Rohan planning? Will Lakshmi tell him this time from the two masterminds? Keep reading.

Reviewed Rating for Bhagya Lakshmi 7th October 2021 Written Update Amazing: 5/5 This rating is solely based on the opinion of the writer. You may post your own take on the show in the comment section below.