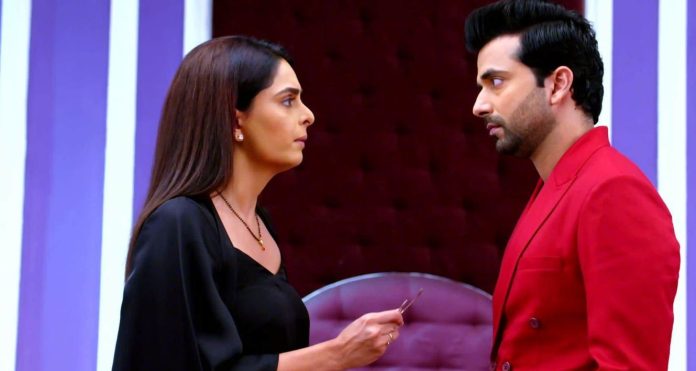 Kundali Bhagya 9th October 2021 Written Update Rishabh to die Prithvi stays thinking about Rishabh’s anger. He wants to know why did Rishabh hold his collar angrily, when he didn’t do anything, he had already proved Preeta wrong in front of Rishabh. He has no idea about Rishabh and Preeta’s bonding. He doesn’t know that Rishabh blindly trusts Preeta, because he knows her since the very day she came to Luthra family. Also, because of the fact that Rishabh had fallen in love with Preeta’s goodness and honesty. Rishabh knows that Preeta can never lie.

Prithvi also has the same faith on Preeta that she can never lie or hurt someone, but he doesn’t want her honesty to hurt him. He likes Preeta, but not as much as he loves Sherlyn. He loves Sherlyn dearly and can’t let Preeta expose their affair to the family. Sherlyn grows panicking while Prithvi meets her to know about Rishabh’s unexpected anger. Sherlyn tells him that Rishabh went to Kritika’s room to keep the gifts and saw Prithvi’s clothes on the bed, he found her/Sherlyn’s earring in Prithvi’s coat and understood about their affair. She tells that Rishabh got certain that Preeta was saying the truth about their romance and extra-marital affair.

Prithvi is shell shocked to know that Rishabh has confronted Sherlyn. He wants to know what did Sherlyn reply. She tells him that she couldn’t deny the sharp accusations, because its the truth. He tells that she should have cooked some story and cheated Rishabh with ease. He asks her why didn’t she do the needful. Preeta keeps an eye on them. She overhears their tensed conversation. She tells that the time has passed, there is no story left with them to make any story, their game is over.

She informs that Rishabh has decided to tell the entire family about their truth in the morning. She tells that they just have a night’s time in the house, and then they will be kicked out of the Luthra house. Prithvi and Sherlyn are stunned to know Rishabh’s decision. Sherlyn asks Prithvi to do something and save them. Prithvi’s revenge didn’t get fulfilled till now. He wants to ruin down Luthras’ business and bring them on the road. He decides to target their business, which isn’t possible until Rishabh is there.

Prithvi wants to kill Rishabh and end the chapter at once. Will Prithvi and Sherlyn attempt to kill Rishabh that he got to know their truth, like they had planned Mahesh’s accident when Mahesh learnt their truth? Will Preeta’s warning to them prove out to be her biggest mistake, since she alerted them about Rishabh’s plans? Will Rishabh survive their evil plans or die? Seriously, even we don’t want an accident, blame game and coma dragging episodes again. Rishabh is the soul of Kundali Bhagya, and we want him to always be there. Comment your views on the shocking upcoming twist and keep reading.

Sherlyn goes to tell Prithvi about Rishabh. She finds Kritika in the room. She lies that she came to ask about Kritika. She goes close to Prithvi and tells that she is in a big mess. She asks him to come and meet her. She asks Bani if everyone has come home. Bani tells that just Kritika and she had come by now. Prithvi worries seeing Sherlyn’s pale face. Rishabh reaches the fashion show event. He sheds tears and recalls Sherlyn’s cheating. He cries on her false love and promises. His friend meets him and finds him upset.

Rishabh tells that he is doing well. His friend understands that Rishabh had a fight with his wife. He asks Rishabh to have drinks and forget the sorrow. Rishabh doesn’t want to drink. His friend insists him to drink. Rishabh drinks on his insistence. Sherlyn and Prithvi meet in the kitchen. He tells her that they can’t be seen by anyone, they have to maintain distance for few days, they can get caught. She explains the urgency. She tells that Rishabh got to know their secret. He doesn’t believe her.

She tells him that she can’t make any story, Rishabh got her earring and caught her affair. He asks her to lie to Rishabh again and fool him. Preeta intervenes to tell them that their game is over, there is no scope for them in the Luthra house, they will be out of the house when Rishabh tells the family about their affair. She tells that their affair news will come out, Kritika will be heartbroken, but she will have courage to slap Prithvi and break his dreams. She asks them to enjoy their last night in the house. She leaves Sherlyn and Prithvi tensed.

On the other side, Kritika gifts Bani a beautiful saree. She tells that she bought a necklace for Kareena. She wants Bani’s opinion. She gets Rishabh’s surprise gifts for her. Bani tells that it would be Prithvi’s gifts. Kritika knows that its Rishabh’s gifts. She wants to meet Rishabh and come. Rishabh gets over drunk. He tells that he still remember everything, because the memories are so bitter. He tells his friend that when he goes home and rings the bell, when his mom opens the door and finds him drunk, then she will feel bad. His friend apologizes.

Rishabh tells that he loves Karan, and Karan also loves him a lot. He leaves for home. Kritika doesn’t find Rishabh anywhere. Preeta feels sorry that Kritika will get heartbroken when Prithvi’s truth comes out. She tells that Rishabh has gone to attend the event. Kritika tells that Rishabh has kept many surprise gifts in her cupboard. She is so happy to get the best brother in the world. Preeta cries seeing her happiness, which will soon turn into tears. She tells Kritika that she wants to tell her something. She loses courage. Rishabh cries while driving in the drunken state. He wanted to start a family with Sherlyn. He feels cheated.

Karan and Preeta get worried seeing him. Rishabh tells that he will not go to his room, he will sleep in the guest room. Karan asks why did he drink. Rishabh sweetly apologizes and asks Karan not to scold him like an elder brother. Karan asks the reason for his drinking. Rishabh tells that his memory is very sharp, he got drunk to forget things, but drinks didn’t help him. Karan tells that drink and drive isn’t permitted by the law, its wrong. Rishabh hugs him. He tells that wrong will always be wrong. He apologizes to Preeta before going upstairs. Preeta cries seeing Rishabh’s anguish. What will Sherlyn and Prithvi do with Rishabh to quieten his voice? Keep reading.

Reviewed Rating for Kundali Bhagya 9th October 2021 Written Update Rishabh to die: 2/5 Sad for Rishabh This rating is solely based on the opinion of the writer. You may post your own take on the show in the comment section below.