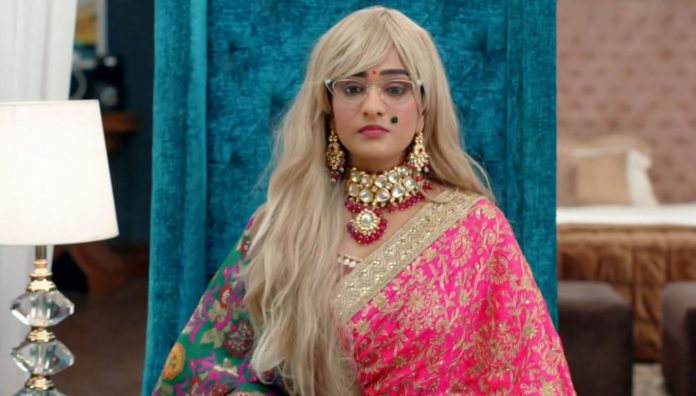 Bhagya Lakshmi 9th October 2021 Written Update Mind blowing Lakshmi makes a plan with Ayush. She asks him to fix a meeting with Shanaya and fool her. Ayush tells that he will call her from a VIP number. Lakshmi asks Ayush to not tell his real name, but a fake name. Ayush tells Shanaya that he has a life changing offer for her. He calls her for a meeting at the hotel. Shanaya tells that she isn’t interested. Lakshmi tells that they are Rishi’s business rivals, it will be beneficial if they meet. Shanaya agrees to meet them. Ayush gives a fake hotel name to Shanaya. Shanaya checks the hotel information online.

Lakshmi tells that Shanaya has got trapped now. Ayush tells that he will take a disguise, and even Lakshmi needs a disguise. He wants Lakshmi to come with me for backup. He convinces her for Rishi’s sake. Lakshmi gets a funny disguise to fool Shanaya. Shanaya and her boyfriend Rohan reach the hotel to meet Lakshmi and Ayush. Ayush and Lakshmi get nervous. They try to fool Shanaya by their fake identities and disguises. Ayush asks Lakshmi to take a deep breath and pick a personality like Neelam.

He tells her that they are doing this for Rishi’s sake. Ayush welcomes Shanaya. Shanaya meets Lakshmi. She doesn’t recognize Lakshmi, but finds her face familiar. Ayush doesn’t want Lakshmi to make any mistake. He covers up for her silly mistakes. Ayush tells them that he can offer her 20 crores if she joins hands with them, and ruin down Rishi. He also offers them three factories, if they accept the offer. Rohan asks why do they think they will accept their offer. Lakshmi tells that she very sure, because their enemy is the same, Rishi Oberoi.

She tells that her business is getting big profits after Shanaya’s molestation blame. She asks Shanaya to send Rishi Oberoi to the jail. Ayush tells that Shanaya shouldn’t step back when Rishi’s mother Neelam gives her any offer. He tells that their condition is just one, she can’t withdraw the case. Shanaya wants to discuss with Rohan. Lakshmi asks Ayush to cancel the deal if Shanaya isn’t ready to decide, even after seeing the offering. Ayush lets Shanaya and Rohan talk in private.

Ayush and Lakshmi want Shanaya to get trapped. Malishka calls up Ayush. She asks Ayush to check Rishi’s emails and inform her about the agency who had sent Shanaya to their company. Ayush tells her that he has come to the hotel with Lakshmi to set a trap for Shanaya. Malishka feels he is making a big mistake. Lakshmi tells that they have come well-prepared this time, they will not lose again. Virender tries to get Rishi out on bail. Neelam wants her son home. Malishka informs Neelam about Lakshmi and Ayush’s plan to meet Shanaya at the hotel. She tells that she has no idea what tactics Lakshmi is going to employ this time. Ayush knows that Malishka would have told everyone at home about their plan. He switches off Lakshmi’s phone.

Neelam threatens to throw Lakshmi out of the house if Lakshmi creates a trouble for Rishi again. She tells Karishma that Lakshmi has gone to trap Rishi again. Shanaya suspects that Rishi’s family is fooling them to trap. Rohan tells that he will send Rishi to jail for ten years if this is just a drama. They want to verify the genuineness of Maharani ji. Rohan tells that they will check the cash and also the factory papers. Malishka goes to meet Rishi at the police station. She tells Rishi that Lakshmi has gone to trap Shanaya again, she will invite more problems for him, he won’t get the bail, he will be proved a culprit because of her. Rishi is worried for Lakshmi.

Malishka tells that Neelam has also gone to meet Shanaya because of Lakshmi. Malishka tells that she will handle Lakshmi’s blunder, she will call the media and declare that they aren’t involved in Lakshmi’s plans. She promises to save Rishi. Virender meets Ayush and Lakshmi at the hotel. He is amazed to see their disguises. Virender asks them what are they doing. Lakshmi tells Virender their plan. He explains her that Shanaya is very clever, Shanaya is defeating them and Rishi is falling in problems further. Karishma tells that Lakshmi has zero brains. Neelam asks her not to back bite against Lakshmi.

She further states that she has no complains with Lakshmi because the latter’s intentions aren’t wrong. She feels Lakshmi has made a mistake to meet Shanaya again. Virender tells that Shanaya will check the cash and papers, its really risky. He wants Lakshmi to come with him. Lakshmi tells that the court case will go for long. She asks Virender to give her 15mins to fix things. He tells that he will just give 15mins to do anything she can. Lakshmi thanks him and rushes out. Will Lakshmi succeed to trap Shanaya? Keep reading.

Reviewed Rating for Bhagya Lakshmi 9th October 2021 Written Update Mind blowing: 5/5 This rating is solely based on the opinion of the writer. You may post your own take on the show in the comment section below.