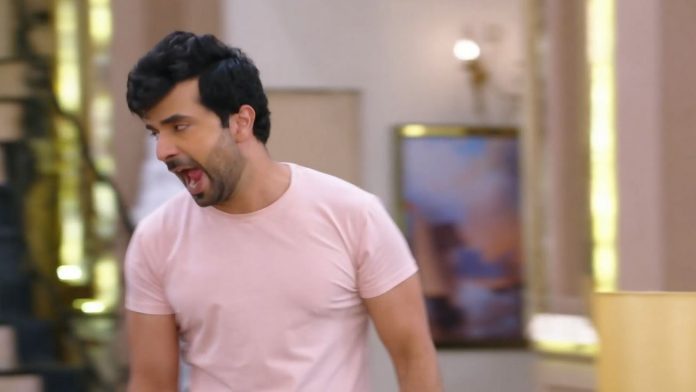 Kundali Bhagya 11th October 2021 Written Update The End Rishabh thankfully doesn’t get attacked in the guest room, where he spends the night, away from Sherlyn. The good thing happens that Rishabh doesn’t even meet any accident when he drinks and drives. It was a crazy episode, giving tension till the moment when Rishabh safely reached home. Rishabh and Karan’s emotional moment really goe good. Karan’s words that wrong is wrong, touches Rishabh’s heart. Rishabh believes that wrong is wrong, and the right person shouldn’t tolerate it. He can never accept Sherlyn’s affair with Prithvi. He can’t see them spreading the dirt in the pure relations. He knows how madly Kritika loves Prithvi.

He is upset that Kritika will be heartbroken once she knows Prithvi’s truth. Sherlyn gets ready to leave the house if the circumstances arise so. Prithvi promises her that he will plot something to stop Rishabh. Sherlyn and Prithvi have spared his life this time. Rishabh sulks inside. Next morning, he wakes up with a hangover. He feels troubled by keeping the truth to himself. He wants to share his sorrow with the family. Preeta wants Rishabh to tell the truth to the family, knowing nobody will believe her if she tells them.

Rishabh tells that he can’t stay like this, he can’t tolerate this pain. Prithvi and Kritika get ready in the morning. They hear Rishabh shouting in the living room and calling out all the family members. Kritika wonders what is the matter that Rishabh is shouting in anger. She tells Prithvi that they should rush and find out what’s happening.

Prithvi gets scared that his truth will come out anytime, then nobody can save him. Rishabh shouts to call Sherlyn outside. Sherlyn gets scared when Rishabh’s voice reaches her ears. Preeta asks her to go out, the time has finally come when Rishabh will be bringing out Prithvi and Sherlyn’s truth. Rishabh rages recalling Sherlyn’s lies which broke his heart completely. Sherlyn thinks of a way to handle the situation and turn it in her favor. Preeta finds Sherlyn frightened. She tells that her stay in the Luthra house is close, its a call for her ‘the end’. Who’s The End it will be? Sherlyn or Prithvi’s The end or of Rishabh? Is Rishabh’s raging scene a reality or just Sherlyn’s tensed nightmare? Keep reading to find out the shocking twist.

The much awaited episode is finally here. Karan takes Rishabh to his room. He asks Rishabh to sleep. Rishabh asks him not to scold him. Karan asks him to just sleep. Preeta thanks Rishabh. Rishabh tells that he wants to talk to them/Prithvi and Sherlyn. He asks Karan to wake him up in the morning. Karan finds Rishabh too worried. Preeta tells that he is worried for Sherlyn, he crossed the limits this time.

Rishabh drops the lamp and shouts to Karan. Karan rushes back to him. Rishabh gets emotional. He tells Karan that he loves him a lot, he doesn’t want anything else. He asks Karan to sleep with him. Preeta really gets worried for Rishabh’s breakdown. Rishabh asks Karan not to blindly believe anyone in life, but just trust Preeta, she is very different, she is very true.

Rishabh tells that he wants to go really far from the house. Karan angrily tells that he will talk to Sherlyn. Rishabh tells that he will have all the talks. He stops Karan. Karan worriedly puts Rishabh to sleep. Next morning, Rishabh wakes up with the bad memories. Preeta stays occupied in making the breakfast and awaits Rishabh’s awakening. Rishabh has no reason to tolerate his wife’s deceive. He doesn’t know how long will he tolerate everything by being so nice and trusting everyone. He wants himself to stop being nice towards the evil doers, who will never change themselves. He summons Kritika. Prithvi worries hearing Rishabh shouting out to call the family. He feels his game is now over.

Rishabh summons everyone else in the family to expose Sherlyn and Prithvi’s affair. Preeta asks Sherlyn to go, its her The end. On the other hand, Kareena tells Mahesh that she wants to gift a solitaire set for Kritika. Mahesh asks her to buy two. He tells Rakhi that they shall also go and buy a gift for Kritika. They hear Rishabh shouting, and rush to know the matter, because Rishabh never shouts in this manner. The family soon reaches Rishabh and asks him the matter. Rishabh breaks into tears when Rakhi asks him the matter. Rishabh thanks Preeta for opening his eyes.

Rishabh hugs Kritika. He tells her that whatever will tell her now will look the worst to her, her birthday will be ruined, but he can’t wait for her birthday to end. Rakhi gets her heart sinking. She asks Rishabh to come to the point. Rishabh tells that his heart has got broken, he got cheated, he didn’t know about it before. Rakhi asks him who has cheated whom. Rishabh tells that they all believe that person a lot. Kareena cries for him and asks him what is he saying. Mahesh, Karan and Sameer want to know. Rishabh tells that he wants to tell them about the harsh truth of two cheaters in their house.

Sherlyn wants to defend Rishabh and save him in front of the police to prove that she is a good wife. She tells the inspector that Rishabh is innocent. Rishabh asks her to get quiet. Sherlyn tells that Rishabh didn’t come home at night, he can’t commit any accident. She stops Preeta and Karan from telling anything. Prithvi finds Sherlyn very cunning. He also knows that Rishabh can’t kill anyone, Sherlyn is saving him to come into his good books. Inspector tells that he has seen the footage before coming to arrest him, Rishabh had tried to kill Sandeep, he sat down the car for sometime, spoke to someone and then left in the car.

Mahesh tells that its impossible, Rishabh can’t leave anyone to die on the road. The family defends Rishabh. Bani asks Inspector to go. Rishabh asks about Sandeep’s condition. Karan asks Rishabh if he has gone mad. Sandeep tells that Rishabh had tried to kill him. He wants the police to arrest Rishabh, who was drunk while driving. He accuses the police for not taking an action against a rich man like Rishabh. He tells that he works as a vendor in Rishabh’s big company, Rishabh accused him for the fraud, and didn’t clear the payments. He makes a fake story against Rishabh.

Rakhi asks Rishabh if he knows Sandeep. Rishabh tells that Sandeep used to work for them, he fired him because Sandeep was doing fraud with them, he had threatened their company manager as well. He admits that he was angry on Sandeep. Inspector asks him if he tried to kill Sandeep in anger. The family stands ahead to protect Rishabh. Rishabh calms down the family. Rakhi cries for Rishabh. Rishabh denies the accident. He asks Inspector to investigate the case well. Bani cries knowing Rishabh is innocent. She asks Mahesh to save Rishabh. Rishabh gets arrested. He asks Karan not to fight with the Inspector.

Karan loses his temper. Sherlyn and Prithvi’s truth get sealed once again because of Rishabh’s shocking arrest. Rishabh fails to tell the family about the truth. Preeta tells Karan that they will talk to the lawyer and get Rishabh out on bail. Inspector informs that Rishabh will be in the jail for two days, because the court is closed. Rishabh hugs Kritika. He asks Kritika to celebrate her birthday well. He feels sorry that he had to go this way. Rakhi tells that its Inspector’s mistake to believe a fraud man. As expected, Sherlyn and Prithvi get saved once again, but thankfully Rishabh didn’t fall in any major danger. Rishabh and the truth gets delayed for two days. Will Rishabh return home and expose Sherlyn and Prithvi? Leave a comment for your love for Rishabh. Keep reading.

Reviewed Rating for Kundali Bhagya 11th October 2021 Written Update The End: 5/5 This rating is solely based on the opinion of the writer. You may post your own take on the show in the comment section below.