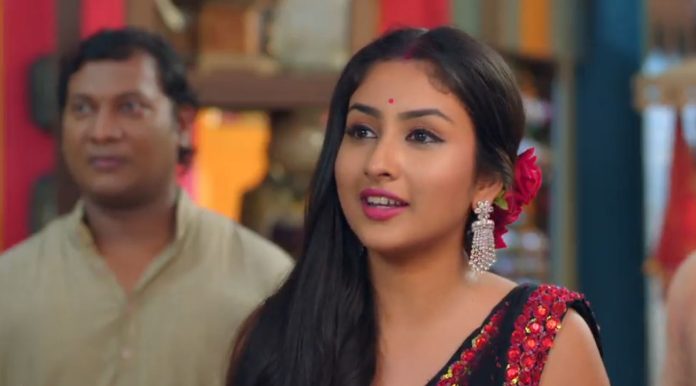 Bondita proves the truth to Anirudh, Thakumaa, Trilochan and Tupur. She calls the police there as well to expose Chandrachur’s crimes. Chandrachur asks Bondita how can this happen that he isn’t in Dhaka when he had travelled all the way from Tulsipur. Anirudh tells that its a trap laid for him by none other than barrister Bondita. Bondita and Anirudh expose Chandrachur in front of the police. They get Chandrachur arrested. Bondita succeeds in proving Anirudh innocent in the fake murder case. Anirudh and Bondita’s happy union is ahead. What will Chandrachur do before the arrest? Comment your views and keep reading.

Chandrachur refuses to let Bondita go away. He proudly presents the list of crimes he had committed just to win her love. He confesses all the crimes he led to create an enmity between the two families and villagers. Bondita tells him that he is a devil, she hates him for doing the wrong. She asks him about Tupur, who blindly loves him. He spits poison about Tupur, whom he never loved. He tells that he will not spare Tupur, since he has got Bondita in his life now. Tupur reaches there with the family, who are just too shocked to know how Chandrachur has broken two families for his madness for Bondita.

Tupur slaps Chandrachur and rebukes him. Chandrachur receives a big shock on seeing Anirudh there. Anirudh stops him from hurting Tupur. He adds that he will never forgive any man for hurting a woman. Chandrachur is more shocked when Bondita reveals about the police and the judge witnessing his crime confession. He tells that none could harm them because he is in Dhaka. Anirudh and Bondita clear his misunderstanding by revealing their plan to trick Chandrachur with the help of the police. They had presented a market depicting a Dhaka locality just to fool Chandrachur and make him confess the crimes.

Chandrachur realizes that he is still in Ranigunj. He gets rebuked by one and all for breaking his own family. Thakumaa doesn’t forgive him. Bondita asks the judge to punish Chandrachur in a way that sets an example for all the wrong doers. She stops Chandrachur from fleeing. Chandrachur gets arrested and dragged to the court, where his entire crimes get noted. He gets punished with a ten year long imprisonment. Bondita proves Anirudh innocent in the court, and also her capability to Subodh. Subodh gets impressed with her for laying a clever trap to punish a devil. He is impressed with her planning and execution, which changes his thinking about women.

He praises her for proving the truth and also proving that a woman can do anything, as best as a man does. Bondita gets applauded for her capabilities. Subodh thanks Anirudh for giving the country a great barrister like Bondita. Anirudh gets free from the fake charges. Bondita brings Anirudh home with all the due honour. Anirudh and Bondita set an example for everyone to raise a voice against injustice. Tapur and Tupur apologize to Anirudh and Bondita, while Thakumaa and Sumati bless the couple for their perfect attributes. Keep reading.

Reviewed Rating for Barrister Babu 11th October 2021 Written Update Big Victory: 5/5 This rating is solely based on the opinion of the writer. You may post your own take on the show in the comment section below.