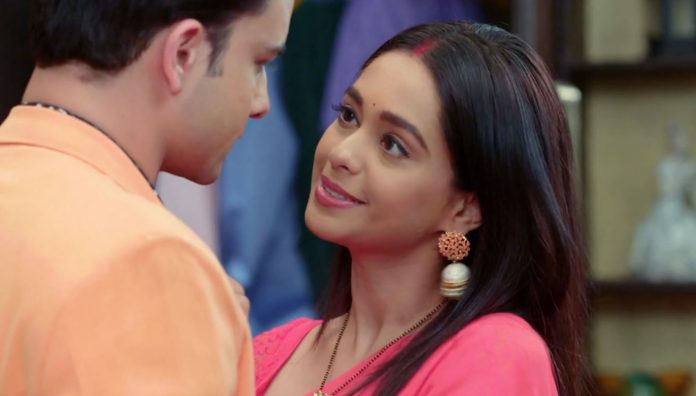 Kumkum Bhagya 13th October 2021 Written Update Prachi shocks Prachi tells Ranbir that Pallavi can’t refuse to Rajeshwari. She doesn’t want to go and disturb Siddharth and Rhea. Ranbir tells that they will not disturb them. She tells that their relation and happiness don’t need any special place, they already have a good relation, but Siddharth and Rhea get personal space. She convinces him to get them go alone. She hugs Ranbir. Rhea calls Aaliya for a meet. They meet outside the house. Rhea tells her that she hates Siddharth, because she loves Ranbir. She tells the honeymoon trip plans suggested by Rajeshwari. Aaliya asks her to use the trip in her favor.

Rhea asks Aaliya how will she go close to Ranbir if she goes on a honeymoon with Siddharth. Aaliya asks her to create such a situation that Ranbir comes to her bedroom, instead Siddharth. Rhea agrees to her plan. She finds Prachi talking to Dida. She goes to hear their talks. Dida asks Prachi to complete the packing and get ready for the honeymoon trip. Prachi tells that she isn’t going anywhere with Ranbir, she convinced him as well that just Rhea and Siddharth will be going on their honeymoon.

Prachi just wishes good for her sister. She believes that Rhea has moved on and wants to win Siddharth’s love. Dida doesn’t knw what to tell Prachi, who explains hat she doesn’t want to disturb Rhea and Siddharth’s personal time. Rhea is shocked to know Prachi’s drop-out plans. He wants Ranbir on the trip to execute her plans. What will Rhea do to convince Prachi for the trip?

Aaliya suggests Rhea to have damage control by a sensible plan. She asks Rhea to apologize to Siddharth, who is the bridge between Ranbir and her. Rhea doesn’t want to get close to Siddharth. Aaliya asks her to go close to Ranbir by using Siddharth. She explains the plan to Rhea. Rhea likes the plan. She shares her personal life. She tells that she loved Purab a lot, but he never loved her, he married Disha, she created a situation and made Disha suspect Purab, Disha left Purab forever. She asks Rhea to create her own fate by changing Prachi’s fate, its a great opportunity to make Prachi suspect Ranbir. She asks Rhea to take care. She adds that she loves Rhea a lot.

Rhea doesn’t want Prachi to come with them, but she has to convince Prachi so that Ranbir comes. She calls Shaina to take her help. She tells Shaina that she wants Prachi to refuse to Pallavi and hurt her ego, then Pallavi will scold Prachi. Shaina tells that Dida can help her. Rhea tells that Dida doubts her, she will never ask Prachi and Ranbir to go with them. She gets an idea to trick Dida. Rhea and Shaina fake a conversation in front of Dida.

Rhea tells that Ranbir and Prachi are pretending to be happily married, they stay just as friends, they are fooling the family because the marriage didn’t bring happiness. Shaina asks what is she saying. Rhea tells that they didn’t celebrate honeymoon, maybe they will get close and then end their differences. Dida overhears their conversation. Dida worries for Prachi and Ranbir. She insists Prachi to go on honeymoon with Ranbir. She takes Prachi to Pallavi. She tells that Prachi doesn’t want to disturb Rhea and Siddharth by going on the same trip. Pallavi explains Prachi that Rhea and Siddharth won’t get disturbed.

She tells that its final that they are going together. She asks Prachi to pack her bags. Rhea tells Shaina that Prachi can’t refuse now. Dida gets happy seeing Pallavi’s care for Prachi. She hugs Pallavi. Prachi tells Ranbir that they are going on honeymoon. Ranbir asks her not to joke with him all the time, he is very confused. She shares her happiness with Ranbir. Dida finds them happy together. Prachi tells that Pallavi wants them to go, so they will go. Ranbir asks Prachi to think about him first. They share a laugh. He is happy that she is going with him without any pressure. Dida blesses them.

She feels Rhea did something good for the first time. Rhea calls up Aaliya and gives the good news that Ranbir and Prachi are coming along. She asks if they will come close on the trip. Aaliya tells that she has already made an entire plan. She adds that an investor is interested in Ranbir’s company. Rhea doesn’t understand. Aaliya tells that if Prachi refuses to come on the trip, then Ranbir should have any reason to go to Manali, Rhea can get close to him. Rhea likes the idea.

She asks Aaliya what shall she do now to stop Prachi from coming. Aaliya asks her to drug Prachi and get rid of her. She asks her to convince Siddharth first. Rhea thanks her for all the great plans. She asks Shaina to arrange the medicine for her. Rhea goes to Siddharth to apologize and fool him. Siddharth gets puzzled by her behavior. She turns polite.

She tells that they shall make a new start, the lack of communication is breaking their bond. She tells that she shall go on the trip and know each other well. Siddharth tells that their relation deserves another chance. He agrees to her and is glad that she is so thoughtful. Rhea tells that they will work on their relation. Rhea knew that its too easy to convince Siddharth. Shaina and Rhea have a fake argument and send Prachi out of the kitchen. Rhea spikes the tea for Prachi for make her fall sick. She tells Shaina that Prachi won’t be going to Manali after drinking the tea.

Pallavi asks Vikram how will he handle the office alone without Siddharth and Ranbir. He romances Pallavi. He tells that they will go to their offices and then return home to go on a candle light dinner. Pallavi asks him not to embarrass her in front of Dida. He asks her if they can go out together. Dida asks them not to stop themselves. Vikram tells Pallavi that they will also go on honeymoon. Pallavi asks him to stop it. The family spends time together. Vikram tells that an investor wants to meet Ranbir and Siddharth in Manali, its better if they seal the deal and come. Rhea and Shaina serve the tea to the family. Keep reading.

Reviewed Rating for Kumkum Bhagya 13th October 2021 Written Update Prachi shocks: 3/5 This rating is solely based on the opinion of the writer. You may post your own take on the show in the comment section below.