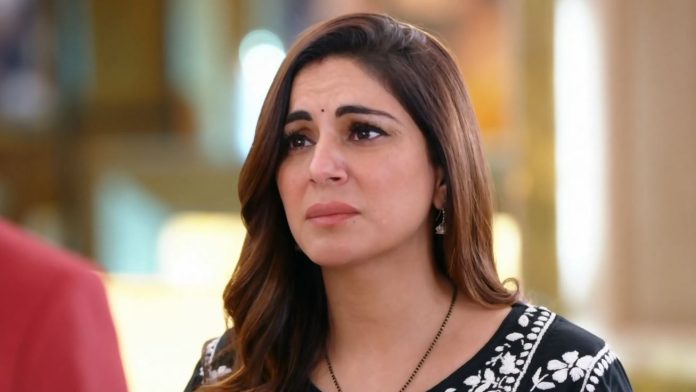 Kundali Bhagya 13th October 2021 Written Update Truth hurts Preeta tells Karan and family that she doesn’t want to give any false hopes to them, that she will bring Rishabh home on the same day of arrest. She tells that she will still try her best to save Rishabh from the fake accident case. She tells them that she met Sandeep and was close to convince him by offering him 50 lakh rupees, but he suddenly changed his mind and refused to the offer. She understands that Sandeep wants revenge on Rishabh. Preeta hugs Rakhi and pacifies her. She asks Rakhi to stay hopeful that Rishabh will be back soon.

Prithvi assures Sherlyn that Rishabh will never get the bail, he will always in the jail and their secret will be safe. He tells her that he has bribed Sandeep and also threatened him, now Sandeep will never go against him. Sherlyn is relieved that she doesn’t have to act like a good wife in front of the family. Sherlyn was acting good to show the family that she really cares for Rishabh.

She had earlier fooled Rishabh as well. but now he knows her truth well. Rishabh awaits the moment when he goes home to his family and tells about Sherlyn and Prithvi’s affair. Sarla learns about Rishabh’s arrest. She visits him in the jail and shows faith on him. She motivates him to keep hopes until the truth comes out. The affair truth hurts Rishabh and Preeta as well. How will Rishabh prove his innocence? Will he get back home and expose Sherlyn and Prithvi’s extra-marital affair? Keep reading.

Preeta convinces Bani to take her medicines for Rishabh’s sake. Kareena sympathizes with Sherlyn and takes her to the room. Kritika takes care of Rakhi. Preeta tells Karan that she is hopeful to save Rishabh. Karan tells that he is with her. Shrishti and Sameer are also with them in the battle. Prithvi finds them together. He overhears them. He asks them to fight as much as they want, because he is enough alone to handle them. He tells that fate is always on his side. Rishabh gets to meet Sarla, when he thinks Rakhi has come. He turns emotional. Sarla blesses him.

She remembers that he has helped Shrishti at the time of her arrest, when they didn’t know Luthras well, he was the only person who supported Shrishti, and also Preeta when she was in trouble. She adds that he is the best person she knows, he has always fought the battles for them and helped them out. She blesses that he is like a son for her. She tells him that she loves him a lot. She adds that he has to stay strong, everything will be fine for him, he has to keep hope. She wants to meet Rakhi and Mahesh as well.

He asks her to pacify Rakhi with an assurance that he is okay. He knows Mahesh isn’t strong. He tells that Mahesh would be broken too. Sarla tells that Rishabh is his parents’ strength, he keeps everyone happy in the family, they will also be strong like him. Rishabh calls her Maa, because she is just like Rakhi for him. He sees her love and concern for him. She tells that every mother is the same, she has same feelings for every child. She asks him to never lose courage, its just a test of a true person, he will get over the problems. He knows that she will come to visit him anytime he misses her.

She tells that she will meet his parents and strengthen them with hope. Rishabh tells that he didn’t wish her to come to the police station to meet him, but he is glad to see her. She asks him to get free from the jail soon and visit her house to have her handmade food. He tells that he loves her. She asks him to take care. He thinks he would have not got drunk and landed in the jail if Sherlyn didn’t give him any such tension.

Sherlyn and Prithvi celebrate their win. She tells that they used to secretly meet before, and now they can openly meet. He asks her not to get mad in happiness, they may get caught. She wants to live her life freely. He asks her to fly in the sky and get the life in her arms. She asks him if Sandeep is working for him. He tells that he knows Sandeep, he met him in the office, he was crying for money, he is a greedy and cheap man, he can help them in their plan. He tells her that he has hired Sandeep. She asks him how much money did Sandeep demand. He tells that he has threatened Sandeep and made him refuse to Preeta’s offer.

He reveals that Sandeep has asked a big amount to trap Rishabh. Prithvi has agreed to give him sixty lakhs. Sherlyn asks him how could he promise Sandeep when they have no money to give him. He tells that he has lied to Sandeep, its in their hands to cheat Sandeep later. He tells that they will get Sandeep killed if he acts smart. She smiles hearing his plans. He tells that she should act like a helpless wife. He celebrates their victory and Preeta’s defeat. Preeta, Shrishti and Sameer go to the police station to meet Rishabh. Preeta cries seeing Rishabh.

Sameer hugs him and feels really sad seeing the handcuffs. Preeta apologizes to Rishabh. She tells that she failed to convince Sandeep to withdraw the case. Rishabh asks her why did she go there. Shrishti tells that Preeta went there as a doctor. He asks her not to take such a risk, the law will help him. They are upset that the law isn’t helping Rishabh. Sameer tells that he is angry on Sandeep. Preeta states that Sandeep isn’t agreeing that Rishabh didn’t do anything purposely, he seemed like taking revenge on Rishabh, or he is doing this for money. She adds that Sandeep isn’t hurt, he is just acting to be severely injured. Meanwhile, Sandeep meets his girlfriend Sudeepa. He brings out the truth of his fake injuries. He tells her that he can walk. She asks him why is he lying on the hospital bed. He adds that he will get money this way. Rishabh feels guilty that he went away and had drinks. Sameer asks Rishabh to share the matter with him, why did he drink that night. Rishabh lies that it was just business stress. He tells them that Sarla had visited him, she has given him much courage, she is really nice. Shrishti tells that Sarla will scold her now for hiding the matter from her. Sameer insists Rishabh to tell him what is he hiding. Rishabh doesn’t tell him anything. Keep reading.

Reviewed Rating for Kundali Bhagya 13th October 2021 Written Update Truth hurts: 2/5 This rating is solely based on the opinion of the writer. You may post your own take on the show in the comment section below.