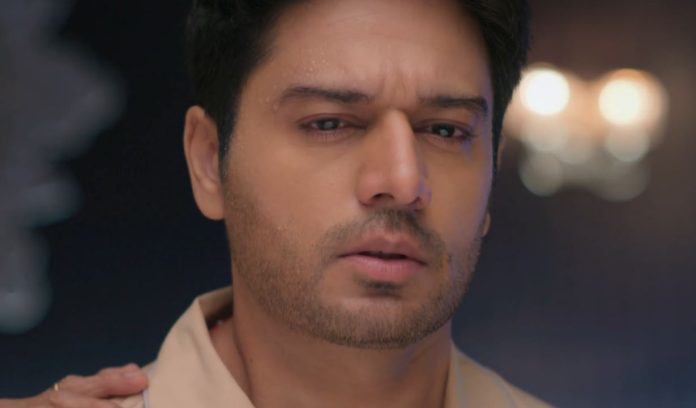 Anupama 14th October 2021 Written Update Anuj’s love Vanraj feels at peace because of Pakhi. He is thankful to Pakhi. Anupama consoles Nandini. Anupama wants Nandini to share the matter with the family, hoping they will understand. Nandini tells that Leela can never understand her. Anupama asks Nandini to tell them the truth after Samar returns. She decides to share the matter with Vanraj. She knows that Vanraj will stand for his children always, Samar needs Vanraj’s support. She doesn’t want Nandini to take any wrong move.

She asks Nandini not to stay alone. She tells that Samar and Nandini will stay with the family now. She pledges to save them from Rohan. Anupama awaits Samar’s return. Anupama and Anuj conduct a cooking competition to choose the best cooks for their project. She forgets the life’s troubles for some time. She tells the ladies an inspiring story about herself. She tells how she lost her own identity while being dutiful towards her family. She had excluded herself from her own life. She asks them not to have any regrets, their stories are the same, they have to write their own stories to change it. She tells them that there is a page left blank for them to write.

Anupama and Anuj encourage the participants by their cheerful dance performance. Kinjal and Devika too support Anupama in her big leap. Anuj’s love for Anupama goes beyond his control. He feels defeated when he tries to limit his heart from loving her. Anupama gets a shocker when she finds someone arriving at the competition event. Will Vanraj make a fresh start with Anupama as a friend and understand her? How will Anupama and Vanraj save Samar? Keep reading.

Anupama takes Nandini to her workplace. She asks Nandini to wait for her in the waiting area. Anupama also asks Nandini to not worry or feel scared. She thinks to inform Vanraj about Rohan troubling Nandini in the evening after Samar returns home. Anupama prays to god for Samar’s well being and safety. GK gets funny in front of Anupama, he pretends to be a prince welcoming Anupama to the kingdom. GK also makes Anuj say funny dialogues, but the latter fails, feeling scared about Anupama’s reaction. GK continues to be funny and says a shayari. Anupama claps for them saying they are playing “mahal-mahal”.

GK explains that there is no age to be funny. He asks Anupama to play with him. Anuj asks GK to let Anupama work. Anupama enters GK and Anuj’s kingdom made by boxes. She tells them that Samar and Paristosh used to play the same game. They used to make the kingdom with pillows. Anupama says after a long time she got a chance to play this kiddish and cute game. She calls GK and Anuj as cute and sweet kids. GK emabaresses Anuj by revealing to Anupama that he and Anuj used to play this game till Anuj’s college time after which Anuj became a shayar. Anupama says it is rightly said that men never grow up. GK makes Anupama laugh by telling her that Anuj directly grew old.

Anupama asks GK to permit her to work for the next day’s competition. Gk gives her the permission saying he and Anuj are always there for her. Anupama says she is lucky that wherever she goes, she gets blessings of a fatherly figure. GK leaves permitting Anupama and Anuj to work. Anuj removes the paper crown from his seeing Anupama laughing at him. Anupama informs Anuj that Rahul asked to call media/press people in the next day’s competition. From Behind Anupama, GK signals Anuj that Anupama is a good woman and a great match for him. Anuj tries controlling his feelings and staring at Anupama. He gets a flashback of Anupama, Pakhi and Vanraj photos on social media and pushes the boxes.

Anuj controls the situation and sends Anupama to work. At Shah house, Baa gets angry with messages in her ladies group. In these messages, people are talking about how their daughter-in-laws are obstinating about participating in the cooking competition at Anuj’s company’s competition. They also ask each other how does Anupama know about Anuj Kapdia? Baa thinks people have started talking. If they get to know that Anuj is Anupama’s friend, people will create troubles for them. She also thinks people will not let them live with peace.

Anuj, Anupama, Devika and Nandini come out of the office and discuss work. Devika asks if all the registered women will arrive for competition or not? Anupama wonders the same. Anuj says it’s okay, business suffers from such ups and downs. He asks everyone to just keep hope. Anuj asks Devika to drop Anupama and Nandini home. Devika says she didn’t bring her car as it went for servicing. Anuj says then first he will drop Anupama and Nandini and then Devika. Anupama says she and Nandini will go by auto. Anuj says it’s not safe late at night. He convinces Anupama to sit in his car, so he could drop her home.

Nandini in a low voice tells Anupama that Samar’s flight might have landed. Anupama asks her not to worry as she has sent someone to pick up Samar and Varun. Before Anupama could sit in Anuj’s car, Vanraj arrives there with Pakhi in his car. Anuj and Vanraj give each other a look. Pakhi tells Anupama that she came with Vanraj to pick up her and Nandini. Anuj asks Anupama to go with his family, Devika calls Anuj Gadha. Pakhi informs Anuj that she will too arrive in the next day’s competition. Pakhi makes Anupama sit with Vanraj in the front seat. Vanraj apologizes to Anupama saying that Pakhi insisted on picking her up.

Before leaving, Vanraj, Anuj and Devika give each other a look. Anuj sits in the car and starts his shayari. Through his shayari, Anuj explains to Devika that a person should let their love go the way in which they are happy. Devika tells Anuj that she would have slapped him if he was not his boss. She explains to Anuj that they should get Anupama out of Vanraj and Kavya’s world as they may again trouble her. Anuj with confidence says he will not let go of the person easily, who will try troubling Anupama again. Devika tells Anuj that he is not wrong to have one-sided love for Anupama. She gives Anuj examples of movies and God’s love. She refers to Anuj as Meera and Anupama as Lord Krishna. Devika tries explaining Anuj through shayari. She also explains to Anuj that Anupama has a family but family is incomplete without a husband.

Anupama returns home with Pakhi, Nandini and Vanraj. Baa tells Anupama that her real place is in the Shah house, not with someone else. Anupama gives Baa a befitting reply saying that place should not only be in the house but in the heart too. She asks Baa when she will give her place in her heart too. Anupama says to Nandini that they should inform Vanraj about Rohan’s misdeeds. Samar returns home and Nandini feels relaxed. Anupama hugs Samar. Samar hugs Nandini too. He asks Nandini and Anupama if Rohan troubled Nandini more? Anupama says now it’s important to inform Vanraj about it.

Vanraj overhears them and asks what important thing they have to inform him. He asks them what happened and asks them to tell him if something is important. Samar diverts the conversation. Anupama insists them to inform Vanraj. Samar says they should take either or Anuj’s help. Anupama says they should not take Anuj’s help when their father is there. Samar says Vanraj will get another reason to taunt him. Anupama says then she will talk to Rohan next morning. She further says if Rohan stops his antics then it’s okay, otherwise she will have to inform Vanraj. Samar says Vanraj can’t do anything. Anupama asks Samar to have blind faith in his father, not in her ex-husband.

In the next episode, Anupama will try motivating other women who came for her cooking competition. She will happily dance with Anuj, Devika and her family but will get shocked and stop seeing someone.

Reviewed Rating for Anupama 14th October 2021 Written Update Anuj’s love: 3/5 This rating is solely based on the opinion of the writer. You may post your own take on the show in the comment section below.