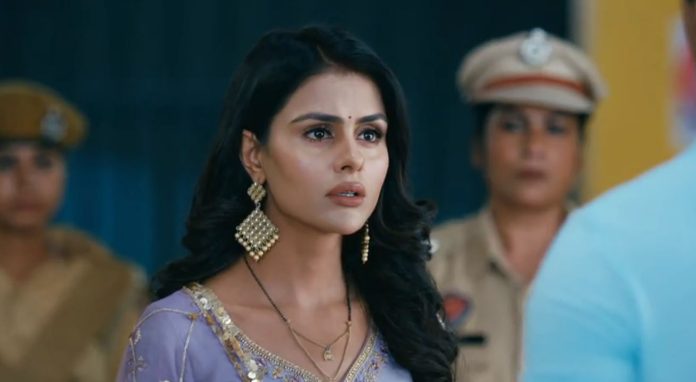 Udaariyaan 15th October 2021 Written Update Tejo’s past Jass assures his mum that he will soon get her released from the jail. He finds her really frustrated. He asks her to give him some time, he is speaking to the lawyers to get her bail. Jasmin finds Jass there. She realizes that he is still hiding from the village people and law. She realizes that Jass is roaming freely only because his mum has taken the blame on herself. Tejo gives hopes to the family that she will bring Fateh home. She gets busy in making the presentation to show the profit plan to the investors.

Khushbeer and Gurpreet believe that Tejo will get the situation under control. He praises Tejo for always fulfilling their hopes. He hates Jasmin, who can’t do any good to them. Jasmin finds a new opportunity when she reaches Jass’ house. She decides to meet him and take his help against Tejo. Tejo takes the elders’ blessings before leaving for the meeting with the investors. Jasmin keeps a watch on Tejo. She realizes that Tejo is again acting as a great savior for the family.

Tejo wants the family to pray that everything goes fine. Gurpreet tells that she will pray to Matarani, and wait for her son’s return. She wants Fateh to return soon. Tejo meets the investors at the academy, and gives a presentation to convince them to lock their money for six months. She shows them the profit plans to win their trust. She regrets that she was away from the academy, and this resulted into Fateh’s loss. The investors get impressed with Tejo and want her back in the academy.

They agree to keep the investment fixed if Tejo joins the academy and works with Fateh as a partner. Tejo gets the new contract to show to Fateh. She tells him that the investors have kept a condition for him to keep their deal on. Fateh checks the new contract. He is amazed to know that Tejo has convinced the investors. Tejo succeeds in bringing Fateh home, winning the praise again, and provoking the devil in Jasmin. Jasmin seeks Jass’ help to remove Tejo from Fateh’s life. She doesn’t know that Jass’ entry will strengthen Fateh and Tejo’s bond.

Fateh stands as a shield to protect Tejo from evil Jass, who claims Tejo is his wife. Jasmin brings Tejo’s past to ruin the present. Will Fateh and Virk family protect Tejo against Jass and Jasmin’s evil motives? We think Tejo is herself capable to get rid of Jass. Comment your views. Keep reading.

Fateh misses Tejo a lot, while she is determined to make the presentation to convince the investors. Tejo doesn’t fail in any responsibility she takes. Fateh knows this well. Jasmin interrupts Tejo’s work and irritates her to the core. Tejo loses her cool on hearing Jasmin’s non-stop nonsense. Jasmin asks Tejo will she save Fateh and do another favour on him. She tells that Tejo will be showing that she is the greatest, she knows it all and she has saved Fateh, while Jasmin is good for nothing. She asks Tejo not to project herself as the savior. She gets too rude towards Tejo.

Tejo doesn’t think Jasmin has a mind to understand how the situation is going against them. She wants to save Fateh. Jasmin accuses her for trapping Fateh in the case. She puts her entire strength in making Jasmin out of the room. Tejo meets the investors. She apologizes to them for the problems they faced in her absence. She didn’t wish Fateh to land into such a big trouble. She gives a remarkable presentation and soon convinces them to let their investments stay locked for another six months. She is pretty sure that the goals subjected in front of them will be reached. The investors tell her that her plan is good but they can’t trust Fateh, who has got them into the loss phase.

They want Tejo back in the academy, and they want her to lead the project. Tejo gets worried to agree to their condition. Tejo goes to the police station to meet Fateh and get his consent for the contract. She wants him to agree to the investors’ terms by his self-will, in order to get his freedom back. Fateh believes in Tejo’s hardwork and determination. He trusts her decisions. He knows that she will be leading the academy more well than him.

He asks her why did she come. He doesn’t want to trouble her further. He feels guilty already. She tells that she has come for the sake of his parents, not him. She tells him that she needs him to sign the papers. Fateh signs the papers and agrees to the investor’s terms. He gets freed from the jail. Jasmin meets him and realizes that Tejo has saved him once again. Jasmin hugs him and moves Tejo away. Fateh faces a shocking protest outside the police station, where he gets defamed and insulted for cheating his wife. The people punish him for ruining his wife’s life and also cheating his academy students by the fraud.

Tejo goes away from there. Fateh faces the big insult, and feels sorry. He loses everything because of his affair. Jasmin acts to protect him, but in vain. Fateh makes an apology to calm the angry crowd. He returns home, all thanks to Tejo. He gets grateful to Tejo, who got him out of the jail in a day. Jasmin meets Jass to plot against Tejo. Tejo’s past will return in her life. Tejo wishes Jasmin doesn’t create any more problems for Fateh and her. She asks Fateh to run the academy as he wants, but keeping Jasmin under control. Keep reading.

Reviewed Rating for Udaariyaan 15th October 2021 Written Update Tejo’s past: 3/5 This rating is solely based on the opinion of the writer. You may post your own take on the show in the comment section below.