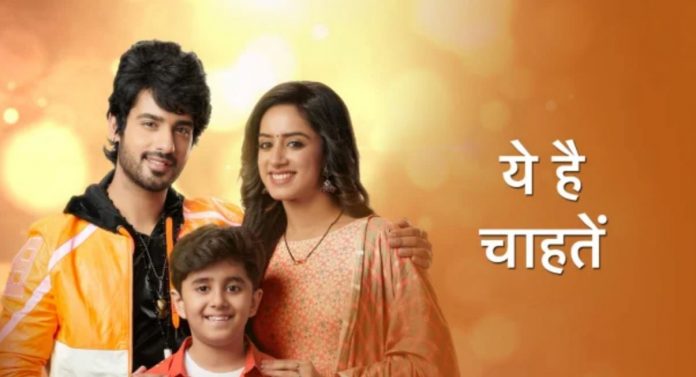 Yeh Hai Chahatein 15th October 2021 Written Update Prisha targeted Rudra and Prisha bring Sharda home. Saaransh runs and hugs Sharda. He asks Sharda if she is fine now. Vasudha tells Sharda that she is happy to witness her fine. Vasudha tells Prisha that Saaransh waited for Sharda to return home and now he needs to go for his tuition classes. Prisha in her thoughts thinks Saaransh and Anvi can become friends if they go tuition in the same car. She stops Vasudha and tells that she will drop Anvi and Saaransh to their tuition classes. Mr. Ahuja reaches Khurana mansion and informs Rudra that he will need to leave for his concert as all the tickets are already sold out. He also tells Rudra that he needs to leave for his concert in Shimla the next day. Rudra refuses to go saying that he cannot leave Sharda behind in her present condition.

Sharda tries convincing Rudra to go as his fans have many expectations from him and moreover, he cannot disappoint his fans. Vasudha too tries convincing Rudra to go for his concert by saying that she will be with Sharda and take care of her. Rudra agrees to do the concert. Rudra feels upset thinking that he will have to stay away from Prisha for so many days. Prisha and kids reach the tuition center. She thinks her plan failed as Saaransh and Anvi didn’t talk to each other the whole way. She finds that Saaransh forgot his tiffin in the car only and asks Anvi to give it to him. Anvi refuses to do so and leaves. Prisha feels she has to do something to make Anvi and Saaransh friends.

Some older boys’ trouble Anvi and bully her. Saaransh watches this and calls Prisha for help. Prisha says she cannot go inside without permission and help Anvi. She tells Saaransh that Anvi will handle them. Saaransh goes to help and Prisha smiles seeing it. Saaransh asks the boys to not trouble his sister Anvi. He gets into a fight with them and Anvi too goes to fight the boys and ask them to leave her brother Saaransh. Older boys ran away. Anvi and Saaransh ask each other if they are fine. Saaransh tells Anvi that they are brother-sisters and can trouble each other but no one else. He also tells Anvi he will fight whoever troubles his sister.

They take each other to Prisha and ask her to tidy their hair and clothes. Prisha asks Anvi and Saaransh to see each other’s brother-sister love. KIds promise Prisha that they will not fight anymore. Prisha thanks the older boys for helping her to unite Saaransh and Anvi. She gives chocolates to those boys to help her. Prisha tells Rudra how Anvi and Saaransh have become friends. She sees Rudra not listening to her and asks him what happened? Is everything fine? Rudra says he is sad thinking how he will live without her, Sharda and kids for so many days. Prisha explains to Rudra that it is important for his comeback and work.

Rudra asks Prisha if she will remain happy without him for 1 month. Prisha jokes with him and Rudra feels restless. In her joke she tells Rudra that she will go to Shimla with him. Rudra gets happy and excited. He takes Prisha in his arms and revolves her. He kisses Prisha again and again in excitement and happiness. Prisha thinks Rudra is happy with her just coming with him. Thinking she is alone, Prisha wonders and says what will be Rudra’s reaction seeing her in her new and hot night dress. Rudra returns and asks Prisha what is she hiding? Rudra sees Prisha’s night dress and Prisha gets shy. Both of them get romantic thinking about their alone time they would be spending in Shimla.

In the next episode, as per Armaan’s plan Mr. Ahuja will take Rudra with him for stage rehearsals. Sanya and Armaan will take Prisha with them for sightseeing. Armaan will suggest a popular hill-top sunset point for sightseeing, Sanya will make a health excuse to leave Prisha and Armaan alone. Sanya will see Armaan going with Prisha and think to see who will celebrate their honeymoon.

Reviewed Rating for Yeh Hai Chahatein 15th October 2021 Written Update Prisha targeted: 3/5 This rating is solely based on the opinion of the writer. You may post your own take on the show in the comment section below.