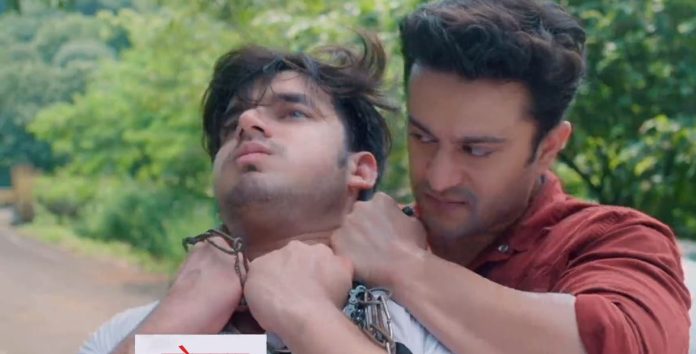 Anupama Spoiler Huge Twist Upcoming Peril for Samar Anupama gets thankful to Anuj for helping Samar. Anuj proves that everyone’s happiness matters to him. Devika encourages Anuj to admit his feelings to Anupama. Anupama fails to get any help from Vanraj. Anuj and Samar want Anupama to handle the cooking competition, while they go and find Nandini. Anupama calls Vanraj to tell about Nandini. Vanraj doesn’t give her a chance to speak. She doesn’t want her children to fall under any trouble. Anuj morally supports Samar. He pacifies Samar in the weak moment. Anuj wants Samar to be strong.

He knows the pain of losing the love, and the fear of not seeing his love again. He asks Samar to just bind the courage with hopes and stay strong. He promises to find Nandini and get her back. Anuj has lost his love. He can’t see Samar losing his love. Anupama lays her faith on Anuj, and hopes that Anuj finds Nandini. She judges the cooking competition alone. Devika asks Anupama about Anuj. Anupama tells that he left for an urgent work. She hides her tensions from the family.

Anuj assures Anupama that he will protect Samar, he is with Samar and won’t let him break down. Samar cries for Nandini. Anuj tells Samar that his men couldn’t find Nandini, they shall involve the family and police to find her. Kavya tells Vanraj about Rohan. Vanraj didn’t know about Nandini’s ex. Anupama arrives home to inform him that Nandini is missing. She tells Kavya that Rohan is troubling Nandini since many days. Vanraj blames Anupama for not telling him about such serious issues before.

She tells that Samar has gone to find Nandini. Vanraj calls Samar, who goes away somewhere, leaving his phone. Anuj answers Vanraj’s call. Vanraj is hurt to know that Anuj has gone with Samar to find Nandini. Anuj asks Samar did he find out anything. Vanraj refuses to go to Samar, who doesn’t need his father. He tells that Samar has given his father’s place to someone else. His anger bursts out on Anupama again. She answers that he didn’t stand with his children in need. Kinjal praises Anuj, who is a nice and helpful man.

Anuj and Samar finally find Nandini and bring her home. Nandini tells that Rohan was trying to kidnap her, she had managed to run away and fainted on the road, until Anuj and Samar found her. Vanraj accuses Anupama for not telling him the matter before. Anuj gets angered seeing Vanraj yelling at Anupama. Samar tells that he didn’t wish Anupama to tell him anything. Vanraj taunts him for giving the father’s place to someone else. He asks Anuj to stay out of his family matters. Samar thanks Anuj for doing a favor again. Anupama feels indebted to Anuj for his numerous favors, leaving Vanraj jealous.

Ahead in the track, Anupama will encourage Nandini to fight the devil Rohan. She doesn’t want Samar and Nandini to get scared of Rohan and give up. Anupama and the entire family performs Puja, while Samar silently goes away to meet Rohan on his call. Samar and Rohan get into a huge deadly fight. Rohan wants to kill him. Anupama senses Samar is in danger. Anupama and Anuj will team up again to find Samar.

Reviewed Rating for Anupama Spoiler Huge Twist Upcoming Peril for Samar: 3/5 This rating is solely based on the opinion of the writer. You may post your own take on the show in the comment section below.