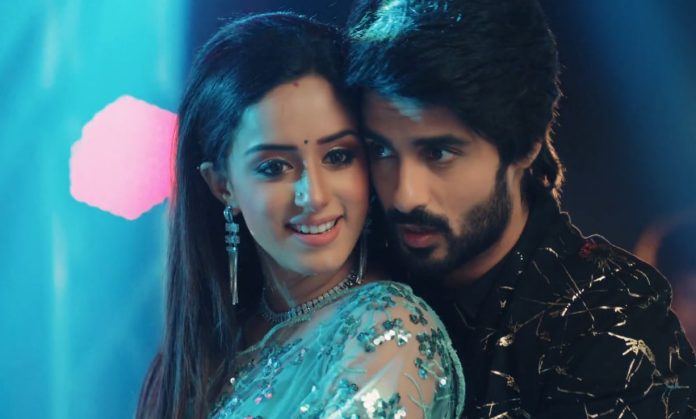 Yeh Hai Chahatein 17th October 2021 Written Update Armaan creates a line of troubles for Rudra and Prisha to ruin their honeymoon. Rudra and Prisha are shocking to see their room filled with room. Rudra checks the leaking pipe. They go and berate the hotel staff for giving such a horrible service when they had booked the best honeymoon suite. The staff apologizes and asks them to give them a day’s time. Rudra and Prisha fail to shift to any other suite. Armaan and Sania are happy to see the plan working. Armaan doesn’t want them to spend the night together. Armaan tells her that he has booked all the vacant rooms, he can buy the entire hotel if needed, but he won’t let Rudra and Prisha stay together.

Prisha tells that they have to shift to any other room. Armaan goes to offer them help. Prisha tells about the water leakage in the room. She adds that there is no room available in the hotel. Armaan offers them to stay with them in their suite. Rudra doesn’t want to accept his help. Sania asks Rudra not to feel awkward and just shift to their room. Prisha tells Rudra that this option is the best for them. Sania tells that they will be glad to help them. Prisha finds Rudra upset. She asks him to make his mood better. Rudra is worried for the concert.

Prisha tells that it will be superhit. He was expecting to spend some quality time with Prisha. She tells that they have an entire life to be together, she loves him a lot and will be with him. He also confesses love to her. He is thankful that she is always with him. Rudra learns about the concert hall getting houseful. Prisha wishes Rudra. She asks him to sing from his heart. Rudra goes for the concert, while Armaan plans to ruin the concert. Armaan and Sania wish Rudra for the concert. Rudra performs in the concert.

He asks his fans to always love him. He sings joyfully. Armaan learns that the concert is superhit, Rudra is singing really well and none can compete him. Armaan tells that Rudra won’t sit the next song. He doesn’t care for his huge loss. He spikes the drink for Rudra to snatch his voice and stop him from singing. Armaan knows what he is doing. He asks the manager to follow his orders. Prisha tells Rudra that he has sung really well. Manager tells that people are going mad hearing his songs. He asks Rudra to have the drink.

Rudra doesn’t drink the juice, when he gets a call from the stage. Rudra gives a second performance, failing Armaan’s plan. Armaan threatens the manager for not working out his plan. He asks him to just administer the drugged drink to Rudra. Manager attempts to do the task again. Rudra asks Prisha to accompany him on the stage for the last song. Manager asks him to drink the juice before the performance. Rudra consumes the drink. He goes on the stage with Prisha. He dedicates the song to his beautiful wife Prisha.

He goes to sing the song without any hurdle, but suddenly loses his voice. Armaan and Sania get glad seeing Rudra in trouble. Rudra isn’t able to sing. The fans go crazy and demand a performance. Manager asks Armaan why did he do this with Rudra. He tells that Armaan has finished Rudra’s career, and also got a loss for him. Armaan asks him to just watch the happenings and not think of his loss. Prisha realizes that the juice is spiked. She checks the glass well. She tells him that someone has added drugs in it. She tries to arrange medicines for Rudra immediately. She tells him that she will not let anything go wrong.

She pacifies him. He gets the medicines in time. Prisha tells that he will regain his voice soon. She makes him relax. Armaan asks the manager to send away the audience, before the star singer has left, Rudra has failed his fans. Armaan and Sania don’t want Rudra to suspect them. He wants to go and pity Rudra’s state. They find Rudra missing from the room. Manager announces that the concert is over, Rudra won’t be able to sing. Rudra makes a re-entry on the stage with Prisha. The fans cheer for his return. Rudra tells that Prisha is an angel in his life, nothing can happen to him until Prisha is there with him.

He sings a song and performs with Prisha. Armaan and Sania reach back and get jealous watching them. Rudra thanks his fans for showering love. He promises to bring more such lovely songs for them. He completes the concert successfully. He thanks Prisha for returning his voice and saving him from the huge mess. Prisha tells that she is nothing without him. Rudra catches the manager to confront him for spiking the juice. Manager denies the blame. He tells that he will not bring loss for himself. He asks Rudra not to suspect him.

Prisha tells that someone had tried to snatch Rudra’s voice, his name and career would have got ruined. She asks the manager to find out the culprit. Armaan praises Rudra for the rocking concert. Rudra suspects Armaan. Armaan tells that he will throw the success party for the grand concert. Prisha doesn’t want to go for it, being scared for Rudra’s safety. Rudra tells that they will attend the party. He wants to find out Armaan’s intentions. Armaan and Sania welcome them in the party. The couples enjoy and dance. Armaan watches Rudra and Prisha’s romantic dance. He tells Sania that he has a fool proof plan, she just has to take away Rudra.

Rudra wants Prisha to not give any excuses and make his night special. Prisha reminds that they are staying in Armaan’s room. Rudra tells that he had fixed their room, they can shift back to their room. Prisha is glad to know his romance plans. Sania goes to separate them. She spills the juice over Prisha’s saree and sends her away. Armaan makes a vengeful plan against Rudra and Prisha. Rudra confronts Armaan for his evil plotting. Armaan reacts in anger and acts innocent in front of Rudra. Sania takes Prisha with her, and learns Rudra’s special night’s plans. What will Armaan and Sania do now? Keep reading.

Reviewed Rating for Yeh Hai Chahatein 17th October 2021 Written Update: 3/5 This rating is solely based on the opinion of the writer. You may post your own take on the show in the comment section below.