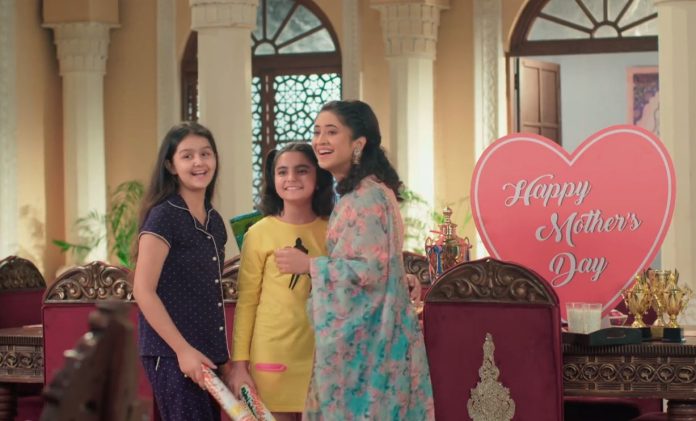 Yeh Rishta Akshara Aarohi track begins 18th October 2021 Sirat says that since their family is together after a long time they should take a selfie. Kartik finds another child in Aarohi’s place and panics. All the family members also get scared. After a leap of 8 years, Akshu suddenly wakes up from her sleep and shouts Aarohi’s name. Sirat comes to her running and hugs her. Akshu says that someone has taken away Aarohi from them. Sirat says that Aarohi is with them only. Akshu still asks Sirat if she is sure. Sirat understands that Akshu saw a dream.

Dadi and Suwarna come to see Akshu and ask what happened to her. Sirat says that she saw a dream. Akshu says that though it was a dream it seemed real and somebody took away Aarohi. Sirat says that is someone mad to take away Aarohi. Akshu says that do not tell like that as Aarohi is her sister. Sirat says sorry and teases Akshu that she is speaking to Aarohi’s lawyer and bodyguard. Sirat asks Akshu to forget the incident Kairav told them as it was 8 years back. The story goes back to the time when Aarohi is missing and everyone asks Kairav where is Aarohi.

Kartik and Gayu scold Kairav and Vansh. Kartik and Manish ask the hotel manager if someone checked out recently. The manager tells them about the couple who checked out and their child’s pram got exchanged with Aarohi’s pram. The couple comes back to the hotel with Aarohi. Sirat hugs Aarohi and cries. The couple says that their children’s pram was the same so they got confused and by mistake took Aarohi away. Kartik thanks them. Kartik says that his little one has been troubling since the day she was born and Sirat says not to tell anything to her daughter.

Kairav asks sorry but Kartik says sorry for scolding him too much but he knows his son is very responsible. Sirat tells Kairav that it was not his mistake. Kairav is not ready to listen and feels that he should have been responsible. Suwarna explains to him that as the prams were the same that is why the confusion happened. Sirat says that Aarohi was not kidnapped but a couple had taken her away thinking she was their child and brought her back once they realized their mistake. Akshu says that Aarohi was not brought back in her dream. Sirat explains to her that she got scared and got up abruptly. Dadi feels that Kairav did a huge mistake by telling her Aarohi’s childhood story and Suwarna says that it has created a fear in Akshu’s mind.

Dadi says that Aarohi is very important for Akshu. Suwarna gives an example of King’s favorite is a parrot just like that Akshu’s favorite is Aarohi. Sirat comes up with an idea to tie Akshu and Aarohi’s legs before sleeping so that they do not separate even in their dreams. Akshu instantly agrees and says that she wants Aarohi to always stay with her and for that, she will do anything. Dadi tells Akshu to be always positive and Suwarna asks her to think that Aarohi will always be with her. Akshu says that she always tells it but will god listen to me. Sirat says that why not and Akshu says that God sometimes doesn’t listen to her as once she had prayed that Kairav and Vansh should not go to the hostel but they went away.

Sirat tries to explain to Akshu that going to the hostel does not mean that they both have parted ways with their families and Kartik has also gone to drop them so will that mean he has gone away too. Akshu says no. Sirat tells her that even if their loved ones are near or far from them they always are close to heart and the relationship between siblings never ends they remain always the same. Sirat further says that Kairav, Akshu, Vansh, Vatsal, and Aarohi together make the 5 fingers and will together fight the world.

Akshu asks Sirat where is Aarohi and what is she doing and Sirat replies to her to check herself. Akshu wishes good morning to Dadi and Suwarna and goes away. Sirat asks Dadi and Suwarna about a childhood incident where Akshu and Aarohi used to cry at the same time and she used to tell Akshu to stop crying or Aarohi will start crying too and she used to stop crying. Suwarna tells that they all understood that day how much Akshu loves her sister. Dadi says that with time their love for each other has only increased and prays to God that the love must go on increasing like this only.

Aarohi promises she will not tell anyone and Akshu tells her that she will tell in the evening. They both start fighting playfully. Sirat comes with a glass of milk and tells them to drink quickly. Akshu and Aarohi wish Sirat a happy mother’s day and she gets emotional. The trio hug and Gayu clicks their picture. Manish and Akhilesh also wish Dadi a happy mother’s day. Aarohi asks everyone whose gift is better hers or Akshu’s. Akhilesh says that both are good but there are more efforts in Aarohi’s gift so it is better than Akshu’s gift. Sirat thanks Aarohi and Akshu. Sirat gifts Akshu a guitar and Aarohi a gadget.

Akshu and Aarohi celebrate with all the family members happily. Akshu feels that if Kairav and Vansh were here it would have been more fun. Kartik calls and both of them fight to speak to him and Dadi says that the house is enlightened by both of them. Sirat insists on telling Akshu and Aarohi that Naira is Akshu’s biological mother and she just raised her. Manish does not agree with it and tells her to rethink her decision. Sirat gets a call from her relative and she insists to let her meet Aarohi but Sirat tells that she has two daughters and warns her to stay away from them. Akshu and Aarohi are waiting for Kartik to call and Akshu picks up the phone to call Kartik and she happens to listen to the conversation.

Akshu is shocked when she gets to know that she is Sirat’s step-daughter and Aarohi is her real daughter. Sirat warns her relative to stop differencing between her daughters but she says that this rule has not been made by her but the society. Akshu is in deep shock and wants to know who her real mother is and cries sitting alone. Sirat decides to tell the truth to Akshu before their relationship sours. Will Akshu understand Sirat’s feelings? Will Aarohi’s bond with Akshu change after knowing the truth? Keep reading.

Reviewed Rating for Yeh Rishta Akshara Aarohi track begins 18th October 2021: 3/5 This rating is solely based on the opinion of the writer. You may post your own take on the show in the comment section below.