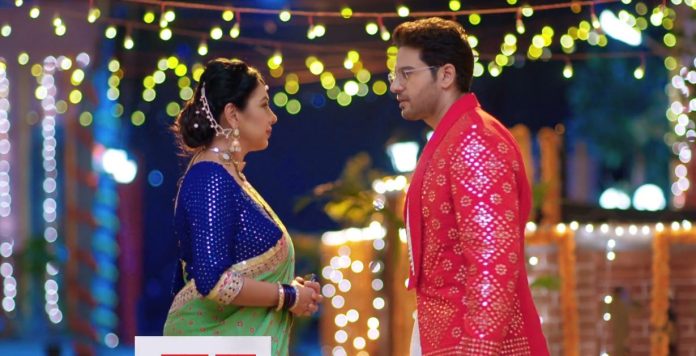 Anupama 20th October 2021 Written Update Anupama attacked Devika gets special dresses for Anupama and Shah family. The family prepares for the Garba festive. Anupama enjoys the drama by Kinjal. Devika surprises Anupama by gifting the perfect lahenga, sent by Anuj. Devika tells that Anupama will wear it in the evening function. Anupama gets delighted to see her favorite colours. Devika tells that one who loves her knows her likes and dislikes well. Anupama thanks Devika, thinking its a gift from her side.

Devika tells that she got a nice dress for herself. Anupama loves the lahenga, unaware that its Anuj’s choice. Pakhi too likes the lahenga. Vanraj happens to get the card. He sees the designer lahenga gifted to Anupama by Anuj. He doesn’t know why Anupama is so happy. He thinks Anupama knows its Anuj’s gift and that’s the reason she is happy.

Anupama gets decked up in the special lahenga, while Anuj arrives at her place for the function. She tells that she didn’t know that he is going to come, but now that he has come, she will not let him go away until the function completes. Anuj asks her is she very sure. She replies positively. She tells him that everyone is with Samar and Nandini, so her worries got less. She thinks Rohan won’t dare to come in the function.

She tells that Rohan can’t harm Samar and Nandini in the presence of so many people. Anupama doesn’t know that Rohan has set the target on her this time. Anupama and Anuj get together to protect Samar, who is threatened by Rohan. Anupama goes away for a while. She gets attacked by Rohan. Will Anuj be able to save Anupama? Keep reading.

Vanraj gets his hand on the card of lehenga that Anuj ordered for Anupama. He fails to see Anuj’s name on it because of the dust on it. Dandiya Night in Shah’s colony starts. Host informs that their colony has organized a 50th pandal in their colony on their fiftieth anniversary of navratri celebration. Samar enters the pandal and in his thoughts asks Rohan to dare come in the celebration. He feels someone behind his back. On the other hand, Anupama thinks that she is not tense for Nandini and Samar as the whole family is with them. She also thinks that Rohan will not dare come to the festival in front of everyone.

Behind Anupama, Rohan is seen thinking that Anupama is the most important person in Samar’s life. He thinks to hurt Anupama to hurt Samar. Rohan in his thoughts apologizes to Anupama and says that everything is fair and in love and war. Vanraj asks Samar to be with or near the family. He sends Paritosh behind Samar. Vanraj sees Kavya in a beautiful lehenga and says “I love you” to her in gujarati. Kavya requests Vanraj to say “I love you” as many times as possible. Vanraj praises Kavya’s look. Kavya asks Vanraj to not worry she will take full care of Nandini. She also asks Vanraj to focus on winning the best couple award. Vanraj tells Kavya that life has already given him his award.

Kavya asks Vanraj to focus on winning and see the prize money. In a low voice, Vanraj says their romantic talks or moments cannot be completed without money. Mamaji interrupts them and says that they are Gujarati and for them even romantic talk means money. Next Baa asks her colony friends to watch her garba. Two of the ladies who earlier shouted on Anupama for ruining their family say they will teach a lesson to Leela (Baa). Nandini is seen walking tensely with Pakhi and Kinjal, Where Kinjal asks her not to worry, Pakhi asks her if she has the pepper spray? Nandini replies yes and tries to calm down. Devika too joins them.

Through texts Samar asks Anuj till when will he reach? Rohan hiding nearby thinks that Samar must be thinking that he will hurt him. He further thinks he does things which people don’t even think of. Anupama feels some behind her. Nandini and Samar are seen holding each other’s hand strongly. Kavya asks Nandini to relax. Vanraj stops Samar, who is leaving to find Anupama. Rohan stops attacking Anupama on seeing Anuj entering the Pandal. Anuj stares at Anupama and smiles seeing her wearing the lehenga ordered by him. Anupama asks him what is he doing here? Rohan thinks he lost the chance to get revenge from Samar.

Anuj tells Anupama that he messaged her that Samar invited him and GK. Anupama says that she didn’t see the message. Anuj asks Anupama to send Gk outside and they will return home as her family members can have problems with him being in the celebration. Anupama says she is proud to have Anuj as her friend and takes him inside the celebration. Rohan again thinks to hurt Anupama. Except Baa, Vanraj and Paritosh everyone feels happy seeing Anuj in the dandiya/navratri celebration. Colony ladies start talking ill seeing Anuj and Anupama together. Anupama greets GK. Samar thanks Anuj for coming.

Anuj asks Samar if Rohan came to the celebration. Samar replies that his family is with him. Anuj goes to Vanraj and the latter says Samar didn’t inform about inviting him. Anuj says maybe Samar forgot. He also asks Vanraj to not worry as Rohan will not be able to do anything. Vanraj tells Anuj that Samar refused to go to the police station and they didn’t go. He also says that the shah family is keeping eyes on Nandini and Samar to protect them. Anuj understands that Samar didn’t tell anybody about his and Rohan’s fight. Anuj goes to Samar and tells him that he made the first mistake by fighting Rohan and second by not informing his family about it.

Samar says to an angry Anuj that he didn’t tell his family about his fight with Rohan. Anuj explains to Samar that his family feel bad and get angry if they get to know that he shared his problem with an outsider rather than them. Anuj explains that he can get trapped in a police case. Angry Anuj orders Samar to tell Vanraj everything. Samar promises that he will tell everything to his family the next day. Anupama goes to get water, where Rohan tries attacking her with a rod from behind. Anuj stops him and takes him aside. He threatens Rohan for attacking Anupama. Anuj asks Rohan to be a man and fight Samar.

Rohan threatens Anuj saying that he doesn’t know who he is. He fails to make Anuj leave his hand. Rohan threatens to leak his and Nandini’s pictures in the pandal, if he doesn’t leave him. Anuj leaves Rohan’s hand and challenges him to dare defaming Nandini. He threatens Rohan to ruin him. Rohan gets confused. Anuj tells Rohan that he knows that in 2012 his father did illegal business of fake medicines. He further says Rohan’s father left India to get saved from the illegal medicine supply case. Anuj again threatens Rohan of giving his fathers’s illegal business information to police. He warns Rohan to not think of hurting Shah’s.

Rohan gets scared and asks Anuj to not bring his father in between. Anuj asks Rohan why he brought Samar’s mother in between? He explains to Rohan that Nandini is his obstinacy not love. He further explains that defaming a girl is vulgarity. Anuj asks Rohan to first apologize to Samar and Nandini, secondly to delete Nandini and his pictures and thirdly to go away from Nandini’s life forever. He asks Rohan if he is ready to follow his conditions or otherwise he will call the police commissioner. Baa taunts Anupama for inviting Anuj in the navratri celebration. She asks Anupama to ask Anuj to return. Samar comes there and says Anuj is guest and friend and he will not go anywhere. Baa threatens to insult Anuj. Anupama thinks she can let Baa insult Anuj who helped her in all her problems.

In the next episode, Outside the Pandal and in front of shahs, Baa will insult Anuj and ask him to leave by saying that colony people will not like an outsider in their colony function. Anupama will remember Devika telling her that Anuj saved her and she failed to keep his respect. She will stop Anuj and GK by coming in front of their car. Anupama will call Anuj her friend and asks him to play Dandiya with her.

Reviewed Rating for Anupama 20th October 2021 Written Update Anupama attacked:
5/5 This rating is solely based on the opinion of the writer. You may post your own take on the show in the comment section below.