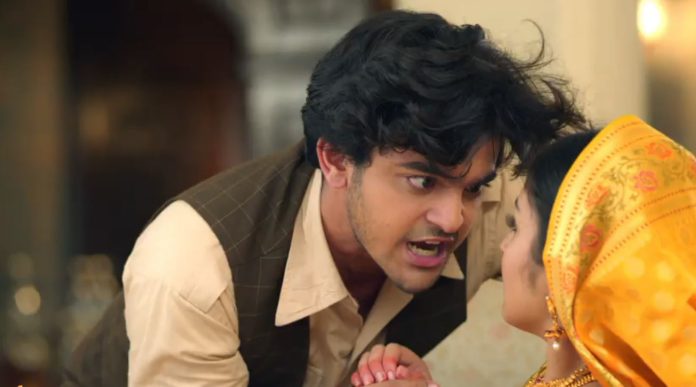 Barrister Babu 21st October 2021 Written Update Insane twist Sampoorna makes healthy laddoos for Bondita for the sake of her coming baby. Bondita refuses to have it. Batuk gets furious watching her kiddishness. He asks her to eat the laddoos, while she refuses. She teases him to see what he does, how he pampers her and feeds it to her. Batuk loses his cool on her stubbornness. He force-feeds Bondita and asks her to eat it, she won’t die eating it any way. Bondita asks him if this is the way to feed someone. He yells at her that its the way to explain a stubborn girl like her, its important to eat laddoos and healthy food for the sake of the baby’s health.

He gets violent. He asks her why doesn’t she understand that the baby is the most important for them. He tells that she should never forget that the baby is the most important, she should look after the baby’s growth and health. He threatens her to look after the unborn baby, else she will see his worst side. Bondita, Sampoorna and Tapur are shocked to see this side of Anirudh, unaware that he isn’t Anirudh but someone else. Will Batuk’s truth come out by his own mistakes? Was this track of Anirudh’s death and Batuk’s insanity really needed in the show? Comment your views. Keep reading.

Earlier in the show, Bondita asks Batuk to apply sindoor on her forehead but he tries to avoid it. Bondita says that she is getting doubt on him and Batuk gets ready but he purposely drops it. Bondita is shocked but gathers herself by not believing in superstition or Anirudh will scold her. She says that she will buy a new one. Batuk gets angry and thinks that Bondita does not deserve Anirudh’s sindoor and vows to make her life miserable.

Batuk gets a call asking for Bondita’s help to fight a case but he tells wrong number. The phone rings again and Batuk shouts at the person that barrister Bondita doesn’t live here. Batuk sees Som and Tapur getting close and Tapur admiring Som. Batuk decides to snatch Bondita’s family members just like she destroyed his family life.

Bondita gets suspicious about Anirudh’s behavior. She finds him drinking the tea instead his usual coffee. Batuk makes an excuse and distracts her to make a way to dump the coffee before she sees it. He tells her that the coffee was really good just like her. He murmurs to taunt her, which goes unheard by her. Bondita has already shared with Sampoorna that she is finding Anirudh’s behavior strange. Sampoorna finds Anirudh praising Bondita with love, and asks Bondita why is she suspecting her husband who loves her so much.

Batuk hears Sampoorna and Bondita’s conversation about the healthy laddoos which should be consumed by Bondita for the sake of the baby’s good health. Bondita gets stern to refuse to have the laddoos, which tastes much bitter. Batuk gets crazy for Anirudh’s coming baby. He can do anything for the baby’s good health. He vents his rage on Bondita, and shocks everyone by his behavior. He gets into his usual self when Bondita angers him. He gets questioned by Sampoorna for his odd behavior. Batuk makes a quick story and changes his tone to a peaceful one just like Anirudh used to talk with love.

He tells Bondita that he will never force her for anything, she has to eat the laddoos for the sake of the baby’s health. He explains her with love and keeps a fake smile. Bondita asks him to eat the laddoos himself. She wants him to fulfill her condition if he wants her to eat the laddoos. Batuk shows his crazy side again by eating many laddoos at once. He tells that he can do anything for his coming baby, he can tolerate anything bitter when its about his baby’s health. Bondita gets pleased, but stops him from proving it further.

Next, Batuk suggests Trilochan that they shall get Somnath and Tapur married, because they are a good match. Bondita wants to know how did Anirudh decide this suddenly when he knows Tapur’s truth, which isn’t known to Somnath. Batuk tells that he feels its right that Somnath and Tapur get married, because of their mutual liking. Trilochan asks Somnath his opinion. Somnath agrees for the alliance. Tapur is also ready to marry him. Bondita takes some time to fix the alliance. She tells that they shall give some time to Somnath and Tapur and decide after they make up their mind firmly. Tupur raises an objection that Bondita is creating hurdles in Tapur’s marriage.

Bondita tells Tapur and Tupur that Chandrachur has wronged Tapur, Somnath deserves to know this truth if he is going to marry Tapur. Tupur doesn’t think Somnath will understand. Bondita tells that they shall explain Somnath the truth, else he may feel cheated if he learns the truth by someone else later on. Tupur tells that Anirudh is aware of the truth and even then suggested this alliance. Bondita tells that everyone doesn’t have a broad thinking like Anirudh, but she wishes Somnath to have such a thinking.

She tells them that the marriage won’t stay strong if its based on a lie. She asks them to be true to Somnath. Tapur agrees to Bondita, knowing the latter is just thinking of her betterment. She knows that faith is the foundation of any relation. Bondita writes a letter for Somnath to tell him Tapur’s truth. She wants Tapur to handover the letter to Somnath and get his reply for the marriage. Batuk wants to foil their plan, only to create a huge drama in the marriage mandap. He plans to reveal the truth on the marriage day and make Somnath break the marriage and Tapur’s heart. He wants to hurt Bondita by hurting Tapur.

Later, Batuk shows his hatred towards Bondita. He wants her to quit her barristry. He asks her to have the milk to get a fair-skinned baby. She gets puzzled seeing him discriminating on the basis of colour. They both get into an argument about the baby’s gender. Batuk wants a nephew for himself. He expects Anriudh’s son to come, while Bondita wants a daughter. A silly fight goes on between them for long, until he gives up. Batuk comes close to her by mistake.

He makes distance since she is his Baudi, Anirudh’s wife. He doesn’t want to do anything immoral. He tells Bondita that he spoke to her doctor, they have to stay away during her pregnancy, they shall sleep apart. Bondita understands and agrees to the doctor’s advice. She compels him to sing a song, but he refuses. Bondita gets upset with his rudeness. Batuk doesn’t care for her upsetness, like Anirudh used to make up for his mistakes. She misses the old Anirudh. Batuk sticks to his revenge motives. Keep reading.

Reviewed Rating for Barrister Babu 21st October 2021 Written Update Insane twist:
3/5 This rating is solely based on the opinion of the writer. You may post your own take on the show in the comment section below.