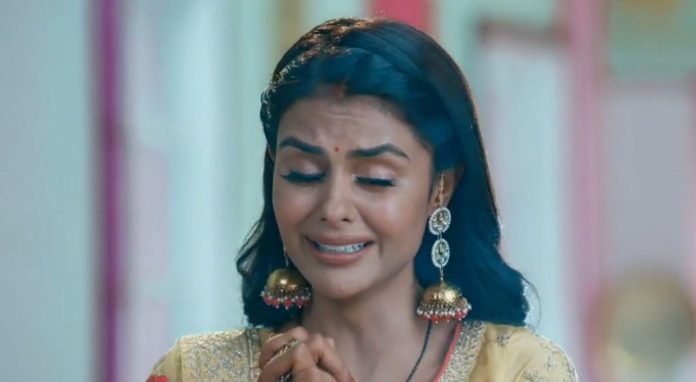 Udaariyaan 20th October 2021 Written Update Kidnapping Jasmin tries to shatter Tejo by making her realize that her marriage with Fateh is illegitimate. Jasmin is hopeful that Fateh will soon marry her, she won’t need to wait for six months to get Fateh and Tejo divorced. She wants to marry Fateh soon, but first throw out Tejo from their lives. She doesn’t care for Tejo. She wants to send away Tejo with the devilish Jass.

Tejo breaks down when she fails to tolerate more pain. She had always compromised with her fate and accepted everything that occured with her. She regrets that her goodness has cost her a lot. She knew that Fateh would never love her, but still kept her marriage with him. She felt lucky that she has fallen in love with Fateh by believing his feelings to be true. She doesn’t want her life to turn towards Jass.

She feels its better to die than going back to Jass by accepting the marriage. She feels that being with Fateh is the only right thing in her life. She has hopes from her relation with Fateh, but realized that her marriage with Fateh isn’t valid. She cries on her poor fate. She wanted Fateh and her marriage to stay, and their memories to be true. Jasmin proves out to be the worst.

She informs Jass about Tejo, seeking help from Virk family. Jass and Jasmin make a plan to get Tejo out of the house. Tejo gets a call, where someone informs her about a student’s suicide attempt, pleading Tejo to come to the college right away and save the student. Tejo doesn’t think much that Jass would be ready to trap her. She rushes out of the house. Jasmin enquires about her leaving.

Tejo asks her to inform Khushbeer that she is leaving for an urgency. She tells about the student’s suicide attempt. Jasmin gets happy that Tejo is finally going out of the house. Jasmin and Jass plan Tejo’s kidnapping. Jass stops Tejo on the way. Jass puts Tejo in the same trauma once again by kidnapping her. How will Fateh find Tejo and rescue her? When will Jasmin’s truth come out? Keep reading.

Tejo sits crying in her room. Candy informs Fateh that Tejo isn’t taking any food. He asks him to keep his friendship and feed the food to Tejo. Jasmin meets Jass and gives him the good news. They share sweets. She tells that his marriage with Tejo is legal, while Fateh and Tejo’s marriage is illegal, Tejo is still his wife. Jass tells that he can file a case on Fateh if Tejo refuses to come to him. Fateh takes the food for Tejo. She asks him to leave her alone if he cares for her. He tells her that she doesn’t need to worry. He understands her pain. He knows she is not at fault.

He assures that none can touch her when he is with her. He asks her not to feel scared. She tells that they have no relation. She tells him that the legal tie-up also got over Jasmin asks Jass why is he dragging Fateh in between. Jass tells her that he is fire, she shouldn’t play with him. He scares Jasmin. She asks him to focus on Tejo, she will handle Fateh. She wants to marry Fateh soon. She tells him that he shouldn’t hurt Fateh. Tejo tells Fateh that they have no relation, he should stay away.

Jass asks Jasmin to give him more jewellery or cash if she wants the work to be done soon. Jasmin gives him a necklace, which she has stolen from the house. She asks Jass to make Tejo out of Fateh and her life. Tejo tells that Virk family is there to care for her. She doesn’t want Fateh’s care. She refuses to eat the food. Fateh feels saddened seeing her crying. Jasmin returns home and gets glad to see her sister in tears.

Jasmin asks Fateh to give some space to Tejo, else she will remember the wrong they did with her. She asks him to leave Tejo to herself. Biji calls Fateh for the puja. She wants to call Tejo also to perform the puja with Fateh, since they are husband and wife. Jasmin tells them that Tejo isn’t Fateh’s wife, Jass can go to any extent and tell that Tejo is living with a stranger, when she is married to him. Fateh and Gurpreet ask her to stop it. Jasmin fakes her concern for Tejo. She tells them that she will perform the puja with Fateh, because she is going to become Fateh’s wife soon.

Bau ji tells that she didn’t get married to Fateh till now, she isn’t his wife, Tejo is his wife for them. Jasmin sheds fake tears in front of Fateh. She tells him that Tejo is lucky to get Fateh and his family’s support. She cries that even Fateh scolds her all the time. Fateh asks her not to talk rubbish. She tells that she is appearing bad to everyone because she loves him. She knows that he worries for Tejo a lot. She tells that she will support him in saving Tejo from Jass. She asks him to accept that he has no relation with Tejo.

She tells him that he should marry her/Jasmin to help Tejo, if they get married, then Tejo’s problem will get solved, Jass will not claim any second marriage case on Tejo. She tricks him by making him think of the dire consequences if Jass crosses limits and defames Tejo in the legal matters. She tells that her heart is crying seeing Tejo in pain. She adds that she wants to save Tejo from Jass, they should get married and help out Tejo. Fateh comes in her words. Tejo gets a call from her student Manpreet, who tells that he is going to commit suicide if he fails in the exam.

Tejo asks him not to take any wrong step. Manpreet tells that he is going to jump down the college terrace. Tejo worriedly leaves from the house, asking Jasmin to inform the family about the student’s suicide attempt. Jasmin calls Jass to inform him that his plan worked, Tejo has left the house by believing his fake call. Jass catches Tejo and takes her in his car. Gurpreet learns that Tejo isn’t in her room. Khushbeer comes home after meeting the lawyer. He asks Amrik to find Tejo. Jasmin lies to them that Tejo has gone out. She hides the reason. Jass shocks Tejo. Gurpreet gets tense about Tejo.

Khushbeer tells that Tejo doesn’t listen to them. Amrik tries calling Tejo. Jass brings Tejo to his place and shows the romantic surprise. She asks him to know the punishment for kidnapping crime. He tells that its just their date, not any kidnapping. Tejo tries to run away. He tells that she is his wife, its his right to spend time with her. He asks her not to anger him, and let him be a peace loving nice man. He tells that Fateh and Khushbeer don’t matter to him, he just wants Tejo without any problem.

Reviewed Rating for Udaariyaan 20th October 2021 Written Update Kidnapping:
5/5 This rating is solely based on the opinion of the writer. You may post your own take on the show in the comment section below.