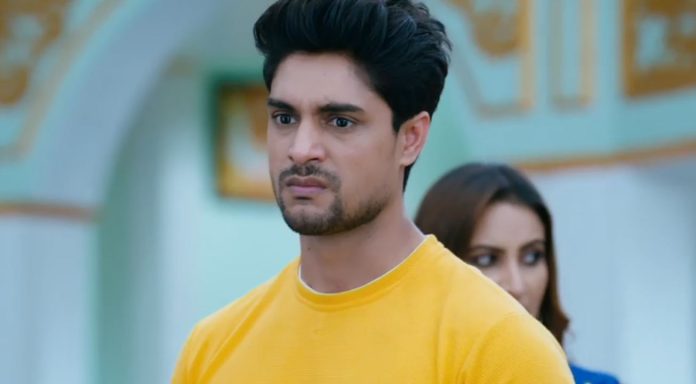 Udaariyaan 22nd October 2021 Written Update Extreme Fateh Jass gets shameless to keep his demands in front of the Virk family. He acts totally indifferent. He tells Khushbeer that if Tejo is the daughter of the Virk family, then he is his son-in-law. He asks Khushbeer and Gurpreet to bless their son-in-law. Jasmin gets worried seeing his overacting. Jass makes fun of Jasmin as well. Jasmin doesn’t want Jass to mention her name even by mistake, else she will be losing Fateh.

The police comes there but stands silently watching the drama, as if they are paid by Jass. Jass speaks much nonsense and gets too overconfident that the Virk family. He proves his words true. He threatens Tejo that Virk family will face dire consequences if she doesn’t come with him. Tejo gets worried for the family, and accepts the fate’s decision. She decides to leave the Virk family to save them from Jass’ wrath.

Meanwhile, Tejo goes home to her family, and sheds tears, exclaiming how Jass has threatened her of ruining Virk family. While the entire family sympathizes with Tejo, Jass doesn’t deter and reaches Sandhu house as well. Jass demands Tejo to come with him. The Sandhu family get provoked to take action against Jass.

The Sandhu family men bash up Jass, unaware that its a trap by Jass to compel Tejo. Jass calls the police there and gets the Sandhu men arrested. Tejo gets broken down seeing her family’s gents arrested and taken by the police. She doesn’t want to accept Fateh’s help, after realizing that Jasmin has manipulated him once again. Fateh reaches Tejo to help her. He feels the extreme need to step in, and doesn’t even listen to Tejo. Will Tejo accept his help this time when the matter has gone out of her hands? Keep reading.

Fateh gets mad at him. Fateh tells that Jass can’t do anything against them. Jass tells that he will file a complaint, and send Sandhus and Virks behind bars. He tells that the court is closed for the Diwali festive holidays, the family will get rotten in the jail for six days. Khushbeer tells that he is ready to go to jail for Tejo’s sake. Tejo stops him. She doesn’t want her family to land in jail. She tells Jass that she will leave the Virk house, she will return to Sandhu house, if he has a problem with her stay in Virk house. She asks Jass not to create any problem for Virk family.

She tells him that he can’t do anything against her if she stays in her Maayka for few days. Jasmin signs Jass to do something. Tejo tells Jass that she will file the case against him for domestic violence and fraud. She threatens to send him to the jail. She wants to handle Jass in a smart way. Jasmin thinks its better that Tejo is leaving from Virk house. Tejo rebukes Jass. He asks her to do whatever she wants, he will tolerate her tantrums with love. Jass asks her to leave the house right away. She agrees to leave the house in front of him. She tells him that she shouldn’t act clever to harm her family.

Khushbeer gets tearful eyes seeing Tejo leave. Jass asks the police to wait outside until his wife comes. Tejo goes to pack her clothes, while Jasmin comes to taunt her. Jasmin feels Tejo has lost a lot in her life. She makes Tejo recall the beautiful moments spent with Fateh. Tejo asks Jasmin not to interfere in her matters. Jasmin tells that she has told Fateh that they will get married once Tejo leaves their house. She gives the marriage news to Tejo and breaks her heart further. Tejo takes a leave from the Virk family.

She tells Khushbeer that its necessary at this moment. She wants to protect all of them. She meets the entire family, except Fateh, so that Jass doesn’t get a chance to taunt her character. Fateh cries on her leaving. Jasmin too sheds fake tears to fool the family. Jass leaves the Virk house when she steps out. Tejo tells Sandhus that she had no option than coming here. Jass comes to meet Sandhus. Tejo stops the Sandhu men from making any wrong move. Jass insults the Sandhus and asks them to come out, he will send them to the jail. Tejo fails to stop Jass from coming inside. She doesn’t want the drama to get seen by any neighbor. Jass asks Sandhus to welcome their Jamai. Jass insults them further.

He tells that Tejo is his wife. He holds Tejo’s hand, which infuriates the entire family. The Sandhu men lose control and beat up Jass. Tejo tries hard to stop them. The police arrives there and finds the fight going on. Jass cries out to file a complaint against Sandhu men. The Sandhus complain about Jass, but the inspector believes Jass. Jass tells that Sandhus have kidnapped his wife, they aren’t sending Tejo with him. Jass shows the marriage certificate. Inspector tells that Jass didn’t beat them, but the family had beaten Jass. The family defends themselves. Jass asks the Inspector to arrest Sandhu men. Sandhu men get arrested. Tejo and Sandhu women cry seeing this shocking sight. Jass has his last laugh. What will Tejo do to save Sandhu family? Keep reading.

Reviewed Rating for Udaariyaan 22nd October 2021 Written Update Extreme Fateh: 4/5 This rating is solely based on the opinion of the writer. You may post your own take on the show in the comment section below.