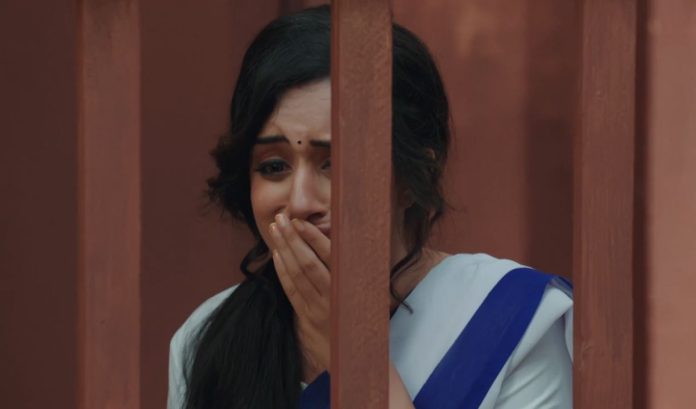 Yeh Hai Chahatein 22nd October 2021 Written Update Prisha sentenced Prisha requests Inspector Chautala to let her talk to Rudra once. Rudra and GPS come there and the former says it’s not required as he is here. Inspector asks Rudra if he thinks of the police station as a public garden that he comes anytime to meet his wife. Rudra says he brought his father-in-law, GPS with him. He says that GPS is Prisha’s father and also a retired judge. GPS shows the court orders that allow them to meet Prisha. Prisha cries in GPS’s arms. GPS asks Prisha to not worry as they will get her free from prison as soon as possible.

Rudra says to Prisha that they should not lose hope and fight for justice. GPS asks Prisha if she knows when Rudra left their room and went to Sanya’s room. Prisha says she was sleeping and doesn’t remember anything. She further tells GPS that Rudra doesn’t remember anything as someone spiked his drink. GPS asks her to inform if she recalls anything. He leaves asking her to be hopeful ad Rudra and he will try their best to free her from sanya’s murder charges.

Prisha asks Rudra how is she now? Rudra says that he lost hope initially but he will fight now. He assures her that he will save and free her from prison. Rudra leaves by requesting Prisha to take care of herself. Next morning Rudra is trying to remember what happened on the murder night. He tells GPS that he just remembers that he fought with Armaan in the party when he asked him to swap their wives. GPS tells Rudra that it’s important for him to remember why he went to Sanya’s room. He further asks Rudra if Sanya herself took him to her room.

Rudra says Sanya didn’t take him to her room herself else she would have been seen in CCTV footage taking him. In their trial to make Rudra remember something, GPS asks if Sanya might have called him. Rudra checks his call history and they got to know that Sanya called him at 3;45 am on murder night. GPS says they have to check if Sanya called someone else too that night. Rudra says his friend Bunty can help him in checking Sanya’s call records. He calls Bunty who asks him about Prisha’s arrest. Rudra confirms Prisha’s arrest and asks Bunty’s help in checking Sanya’s call records.

GPS asks Rudra did Armaan himself tell him this? Rudra says that Armaan accepted everything himself. GPS asks Rudra how trustworthy is Mr. Ahuja. Rudra says he doesn’t feel that Ahuja can be involved in all this. GPS says they can get some clues from Ahuja and they should meet him. Rudra takes GPS to Mr. Ahuja. Ahuja refuses to accept that he mixed red powder in Rudra’s juice during the concert. GPS asks Ahuja to tell the truth if he wants the safety of his daughter. He scares Ahuja by showing him that two of his men are behind his daughter.

Ahuja gets scared and accepts that he knew Rudra’s juice had red powder mixed in it. He says that Armaan mixed red powder in Rudra’s juice and threatened to kill him. Ahuja further says that he tried to stop Armaan and told him that he could lose crores by ruining Rudra’s career. Rudra asks Ahuja how will Armaan lose crores when it was his concert. Ahuja says that Armaan bought his company’s records. He tells that Armaan purchased his company’s records on knowing that Rudra was performing for his company. Rudra asks Ahuja why didn’t he informed about Armaan purchasing his records. Ahuja replies he went greedy as Armaan gave him a lot of money for hiding all this from Rudra.

GPS says to Ahuja that he should have respected his age and old relation with Rudra. Ahuja apologizes to Rudra and GPS and requests them to not punish his daughter for his mistakes. GPS assures GPS that his daughter is safe. GPS and Rudra leave to meet Armaan. On the way, Rudra asks GPS how he got to know about Ahuja’s daughter’s location. GPS tells Rudra that he just used Ahuja’s daughter’s social media video to scare Ahuja.

GPS and Rudra reach Armaan’s location. Rudra pushes Armaan and asks why he purchased Ahuja’s company’s records? Armaan pretends to be innocent. Armaan accepts that he purchased Ahuja’s company records and mixed red powder in Rudra’s juice to get Rudra out of his way to Prisha. He further says that he can lose many crores to get Prisha. Rudra asks Armaan if he murdered Sanya to send him to Prison and get separated from Prisha. He says it was Prisha’s bad luck that Prisha came to murder location and took blame on herself.

Next morning, Sanya’s murder case is heard in court. Sanya’s lawyer calls Inspector Chautala in the witness box, who gives her statement against Prisha. Next doctor who did Sanya’s post mortem is called in the witness box. His statement too goes against Prisha. Waiter who saw Sanya’s body first tells the court that Prisha made him break Sanya’s room door and went inside. Other staff of the hotel too give statements against Prisha. GPS asks Prisha’s lawyer why he is not arguing in favour of Prisha? Lawyer says to GPS that everyone is telling the truth and Prisha herself accepted her crime.

Lawyer in favor of Sanya speaks against Prisha and asks the judge to give his decision as he heard all the witnesses and saw all the proofs that are against Prisha. After hearing all the witnesses and going through all the proof, the judge gives 20 years sentence to Prisha. This shocks everyone including Armaan. Prisha is taken away from Rudra and her family. Rudra doesn’t take anyone away from him and hugs her. GPS says in the past too Prisha took someone else’s blame. Police finally take Prisha away from Rudra. Rudra breaks down.

GPS tells Rudra that they will take Prisha’s case to Delhi High Court. After 15 days, Sharda asks Rudra to make Prisha eat the Sargi. She asks him to have hope. Rudra gives Sargi to Prisha and asks her to feed him Sargi. He tells him that he will keep the fast this time for her to get Karva Maa’s blessing for her. Prisha says she will too keep the fast for him. They pray to God to get Prisha free from Sanya’s murder charges. They feed Sargi to each other.

In the next episode, GPS will tell Rudra and Bunty that they will need to prove that someone else can also be Sanya’s murderer to take this case to Delhi High court. Rudra will find someone’s number, and doubt that this person can be Sanya’s murderer or may be knows something about the murder. Bunty will check whose number it is and will show it to Rudra.

Reviewed Rating for Yeh Hai Chahatein 22nd October 2021 Written Update Prisha sentenced: 3/5 This rating is solely based on the opinion of the writer. You may post your own take on the show in the comment section below.