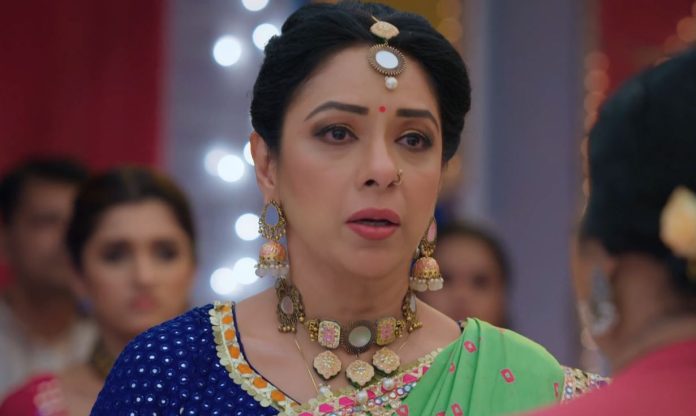 Anupama 22nd October 2021 Written Update Bold rebel Host welcomes Anuj on the Dandiya night and calls him a big business man. Everybody starts dancing with their respective partners. Kavya asks Vanraj to focus on the dance to do better than Anupama and Anuj. Baa stops dancing in anger. Paritosh asks Kinjal why Anuj came back, when he left. Kinjal replies that it’s good that Anuj returned because it felt that electricity went in between favorite shows. Paritosh says he doesn’t like Anuj. Kinjal tells Paritosh that she doesn’t like his attitude. She says to Paritosh that he blurts anything instead of enjoying. Many women praise Anuj and his looks. They think to take selfies with him.

Gk tells Bapuji that for the first Anuj is playing Dandiya wholeheartedly. Bapuji tells Gk that Anupama is also playing Dandiya in this round. He prays to god that Anuj and Anupama’s friendship remains like this. Host asks everyone to dance their best to win. Baa doesn’t feel good seeing Anuj and Anupama dancing together. Some colony ladies too don’t like seeing Anupama and Anuj together. Paritosh’s finger gets injured and he leaves the competition. Kinjal goes behind him. Devika and Pakhi too leave the competition. In anger and jealousy Vanraj loses his focus and leaves playing Dandiya.

Angry Vanraj keeps staring Anuj and Anupama dancing together. Nandini and Samar get out of the competition. Anupama and Anuj are the last couple who completes the whole dance. Host announces the winners. Firstly, Neelam Pandya wins the best child award. Kavya wins the best dressed award. Kavya doesn’t feel happy even after winning best dressed seeing Vanraj’s focus on Anupama and Anuj. Baa and Bapuji won the best senior jodi award. Baa doesn’t feel happy with it. Host stops Baa on stage and refer as an important member of the pandal as well as a good person. Mamaji jokes that the host is mistaken.

Host requests Baa to give the best couple/jodi award and cheque to the winners. He announces Anupama and Anuj as the winner of Best jodi award. Except Baa, Vanraj and Paritosh everyone feels happy for Anuj and Anupama. Host announces that a winning jodi is the jodi who stays till the end. He calls Anuj and Anupama’s jodi the endgame and the best jodi. Host further says that Anuj and Anupama played dandiya for enjoyment/happiness rather than for winning. He congratulates them and requests Leela to give a cheque and award to the winners.

Anuj saves Anupama from falling from the stage. Pakhi congratulates Anupama. Other family members too congratulate Anuj and Anupama. Anupama tells Bapuji that approx 56000 of their loan from Anuj got less. Devika tells Anuj that the whole world calls Anupama and Anuj’s jodi as the best jodi. Some colony women talk ill about Anuj and Anupama. They taunt Baa for not keeping eyes on Anupama and not being able to control her actions. They say Anupama was in a hurry for divorce because of Anuj. colony women say if their daughters or daughter-in-laws may not go wrong seeing Anupama.

Society women ask Baa to make Anupama understand that she cannot be friends with Anuj in their colony/society. They call Anupama and Shah ill -mannered and warn Baa to stay in the society with dignity. Anuj, Anupama, Kinjal and Nandini take selfies. Kavya taunts Vanraj and says that she feels Anuj and Anupama’s jodi is the best. She scolds him for staring Anuj and Anupama. Baa comes in between Anupama and Anuj’s selfie. Baa asks Anuj who he thinks he is? She doesn’t even let Anupama speak in between. Baa threatens Anupama to slap her.

This shocks everyone. Kavya asks Vanraj to stop Baa as talking ill with Anuj will cost them high. Baa accuses Anuj for the fights in her house and family. Bapuji asks Baa to shut down. But instead Baa says to Bapuji that Anupama failed to keep their respect. She calls Anupama shameless. Baa insults Anuj and asks him to leave. She also warns Anuj to dare not be seen in their society. Samar asks Baa to stop, but she shuts him too. She even stops Kinjal from saying anything and warns everyone to not say anything in between. She continues insulting Anuj. Baa Insults GK too.

Devika asks Baa to not cross her limits. Baa asks Devika to be quiet or otherwise she will insult her too. Devika replies she is not Anupama who remains quiet. She uses Devika’s divorce to insult her. Baa tells Devika that she made Anupama like her. Devika says it’s better to be like her than being like her (Baa). Baa asks Devika if she thinks that she is better than her (Baa). Devika says yes she at least knows how to talk in public. She further says that she knows to respect the person who helped her a lot. Devika calls Baa a strange woman. Baa accuses Devika of provoking Anupama for taking divorce from Vanraj.

Devika tells Baa that she can’t handle seeing her daughter-in-law happy and thinking about herself. She calls Baa ill-mannered, unconfident and ungrateful. Devika further says to Baa that she always takes advantage of her age. Paritosh asks Devika to not talk ill with Baa. She shuts Paritosh too. Devika calls Shah’s ungrateful. She asks Bapuji, Samar and Kinjal how they live with Psychos like Baa, Vanraj and Paritosh. Baa gets angry at Devika’s words. GK asks Baa to calm down and be quiet. Baa replies to GK to not speak in between as she doesn’t talk to servants. This infuriates Anuj and he shouts Baa. Anuj asks Baa to stop.

Baa tells Baa that they kept her as their daughter but didn’t allow her to cross her limits. Colony women scold Baa for giving freedom to Anupama. Vanraj taunts Anupama for taking advantage of being referred to as the daughter of his house. He gets angry at Anupama for staring at him and accuses her of everything. Anuj controls his anger and starts leaving with GK. Anupama says Anuj will not go anywhere. This angers and shocks Baa, Vanraj and Paritosh. Anupama says to Baa that she cannot honour her words as the latter herself didn’t respect her friends and guests.

Baa again threatens Anupama of slapping her. Anupama asks her to slap and she will question. Vanraj asks Anupama to talk to Baa with respect. Anupama says she is just making Baa remember what she forgot. She tells baa that she and the colony people forgot their values. Anupama indirectly calls Baa and the colony people egoistic, jealous, angry and greedy. She also calls Baa, Vanraj, Paritosh and colony people as narrow minded and people with orthodox thinking. Vanraj says to Anupama that he will not tolerate Baa’s insult. Anupama says to Vanraj that he always tolerated his children’s mothers insult. She further says that she is just answering the questions raised on her and Anuj’s relationship. Anupama says she will do what she hasn’t done for 26 years. Bapuji, Anuj and Devika feel proud of Anupama.

Reviewed Rating for Anupama 22nd October 2021 Written Update Bold rebel: 5/5 This rating is solely based on the opinion of the writer. You may post your own take on the show in the comment section below.