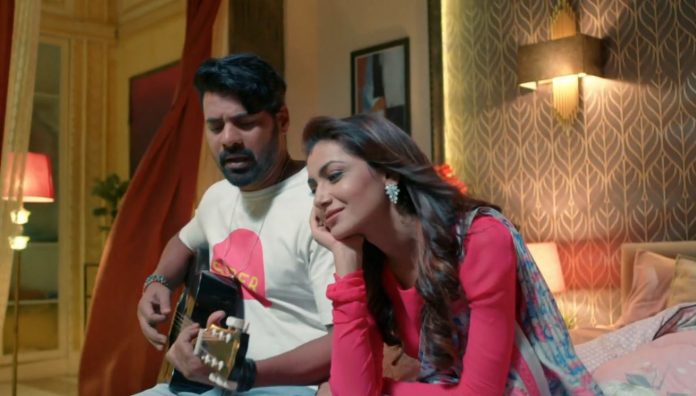 Kumkum Bhagya 25th October 2021 Written Update Love twist Pragya tells Abhi that he was her favorite rockstar and she was his number one fan. She asks him why did he leave the music. He tells her that a singer needs an inspiration to sing, he has no reason or inspiration in his life, he left music since his inspiration left him. She tells him that now the situation is better for them, he shall sing a song for her sake. Abhi refuses. He is hurt that she left from his life, and also took away all his happiness.

She gets happy hearing this. He tells her that he likes her because she is his sister-in-law, Prachi’s sister and Siddharth’s wife. He tells that Siddharth and Prachi have a good clean friendship. He asks her not to think too much else she will go mad. He asks her to stop thinking wrong things about her husband. She tells him that he is doubting her intelligence, if he trusts Prachi so much, then he has prove her wrong.

She challenges that she will prove him wrong if he fails to prove his wife right. He tells her that she didn’t change, she takes everything on her ego. He asks her to think from her heart. She feels those who think from their heart get cheated. He tells that his belief isn’t any illusion, he will soon prove it that he is right. He promises her and sends her away. He feels she is still the same like she was during their college days. Prachi tells Siddharth that she will go and see Ranbir once. Siddharth asks her to give her time to work first. She likes to work, but she isn’t career-oriented. She tells that she isn’t ambitious, she has to support Ranbir and now she wants to spend time with him.

She wants Ranbir’s life to get easy. Siddharth tells that she can sacrifice anything for her husband’s dream. Prachi tells him that she believes in fairy tales and Ranbir is her prince charming. Rhea overhears their conversation. Prachi tells that she will live a life like a fairy tale. Siddharth tells that Ranbir is lucky to get her love. He stops her, but she leaves. Prachi goes to meet Ranbir. He asks her to put him to sleep. Ranbir and Prachi have their love moment. He trusts her pure love.

Meanwhile, Pragya and Abhi get into a cute banter, when she demands him to sing a song. He tells her that he will not sing for her. She insists him to sing a song at any cost. He asks her if she got drunk by stealing his alcohol. She gifts him a guitar. He gets emotional to see a guitar and hold it after so many years. He plays the guitar, and then drops it. He refuses to play it. She tells that he can never forget to sing. She plays the guitar, and angers him. He asks her not to play it so bad and insult the music. He agrees to sing a song for her. Abhi and Pragya get happy living their old moments together.

Abhi’s singing worries Tanu and Aaliya. Tanu tells that Abhi is singing in Pragya’s room. Pragya imagines a moment with Abhi. She finds Tanu and Aaliya coming to her room. She asks them to stay out from her personal concert. She shuts the door on heir face. Pragya thanks Abhi for singing a song for her. Abhi is grateful for her for the precious gifts, his guitar and his office. She tells him that she wants him to meet himself.

Tanu advises her to lie sometimes and save the relations. She calls Aaliya the worst friend to break her hopes in this way. Later, Tanu vents her anger on Mitali. Abhi asks them about Pragya. Tanu tries to talk to Abhi, but he ignores her. Abhi and Pragya have their shy conversations going on. Mitali tells that Abhi always asks for her. Abhi asks Mitali not to tell anything further. Tanu asks him why is he behaving like a teenager falling in love. Abhi doesn’t want to answer her. Aaliya watches their arguments. He asks Tanu who is she to ask him even if he falls in love.

She reminds him that she supported him in the bad time. He tells that he didn’t force her to stay with him, she stayed with him under the same roof but never supported him. She tells that she is his wife, she stayed with her husband even in the chawl. He tells that he is Pragya’s husband now, he never got divorced from Pragya. He asks Tanu not to play any wife’s drama, he never gave her a wife’s rights, since those rights just belongs to Pragya. Pragya gets touched on hearing his words. Keep reading.

Reviewed Rating for Kumkum Bhagya 25th October 2021 Written Update Love twist: 5/5 This rating is solely based on the opinion of the writer. You may post your own take on the show in the comment section below.