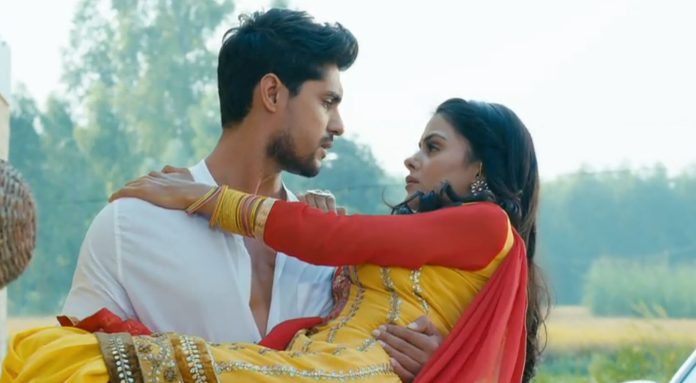 Udaariyaan 26th October 2021 Written Update Fateh in danger Fateh visits Rohtak to find about Jass and his relative Rukmani. He wants to find out who is Rukmani, and why does she visit Jass’ mother in the jail every month. He is pretty sure that Rukmani can prove out to be a big clue in Jass’ matter. He wants to prove Jass a fraud, and hopes that Rukmani would be a helpful source. Fateh gets caught by Jass and his goons. Jass learns Fateh and Tejo’s planning of meeting Rukmani and proving him as a fraud. He stops Fateh and captures him. He asks his goons to treat Fateh well.

Fateh gets bashed up by Jass and his goons. Jass laughs seeing Fateh’s miserable state. Fateh is covered up in a sack and beaten up. Jass tells that he shall now see what Fateh can do against him. He gets overconfident that Fateh can never expose his truth. Is that really Fateh in the sack or someone else? How will Fateh save Tejo from evil Jass? Fateh has promised Tejo that he will bring her out of the huge mess? Will Jasmin’s truth come out through the jewellery she passed from Virk family to Jass? Keep reading.

Earlier in the show, Fateh goes to drop Tejo home. Tejo tells that his friend in Rohtak will help him. Fateh asks her to take care of herself. Satti lies to Jass that Tejo has gone to the college. Jass scolds the women. Fateh learns that Tejo didn’t eat anything since night. He asks her to have some food, else she will feel weak. Satti attacks Dilraj again. He compels the family to tell him the truth. Fateh finds Tejo crying again and feels sorry for her. Tejo gets hurt recalling their moments. She realizes that Fateh is no more her husband, and sheds tears. Fateh consoles her. He wants to bring her out of the sorrowful phase.

Jass threatens the family about hurting Dilraj. He asks him about Tejo. Tejo is worried for the family. Fateh wishes to promise her that he will get her out of this mess. The family asks Jass to leave Dilraj. He returns her phone and asks her to call Tejo or her friend. Satti calls Tejo and asks her to come back home. Tejo asks if everything is fine. Satti tells that Jass woke up, he is waiting for her. Fateh asks Tejo if he should come along. Tejo tells that she will go alone. Fateh gives her another phone to secretly use it.

Jasmin speaks to Sweety. She tells that she will go shopping with Fateh. She fakes the call in front of Gurpreet and Nimmo. She tells them that she is going to the academy for work. She packs her tiffin and leaves. Gurpreet worries for Tejo, who has done a lot for their family and academy. Tejo returns home and finds everything shattered. Jass scolds her for going out to meet her lover. She lies that she went to the college. He tells that he will make everyone dance on his finger. He doesn’t believe her.

He asks her not to act smart, only then she will be alive. He asks them not to go out of the house. He reminds that Sandhu men are already in the jail. He starts a game with them. Tejo tells Satti that Fateh has gone out to find evidence against Jass. She hopes to receive a good news. Fateh comes to the academy and sees Jasmin working. Jasmin tells that he is her life. Fateh tells her about the findings against Jass. He thinks she will be proud of him. He tells that Jass’ game will be over, he will be out of their lives soon.

He wants to get Jass arrested. Jasmin fakes her concern for Tejo and asks him what evidence did he get. He promises to tell her everything once he finds out the evidences. He tells that Jass will get arrested in a day. Jasmin worries that her plan will fail. She fakes dizziness. She tells that she had overworked today. He asks her to go home. She rushes to inform Jass about Fateh’s findings. Jass commands Tejo to dance. He troubles her further. Tejo and her family tolerate him. Tejo doesn’t speak to Fateh in Jass’ presence.

Fateh wants to talk to her once. Jass asks Tejo to drink with him. Tejo tells that she will go to washroom and come. She calls Fateh and asks him if he has come back from Rohtak. He tells that he got a solid proof against Jass. Jass asks Tejo to come out quickly. He gets Jasmin’s call. Jasmin asks him to meet her right away. She tells that its urgent. Jass asks her what happened that she is so tense. Jass tells Tejo that he is going out, he will come back soon. He leaves her with a warning. Jasmin meets Jass and informs him about the proof found by Fateh. He asks her not to act clever with him. She asks him not to hurt her. She tells that she will inform him everything once she knows it.

Jass asks her if Fateh and Tejo were together. She tells that they were together. Jass tells that Fateh can’t do anything against him. She asks him not to hurt Fateh and just trouble Tejo. She advises him to run away for some days. Jass refuses to go away if she doesn’t pay him money. He tells her that he isn’t a fool. She tells that Fateh would be involving Tejo in his plan. Fateh tells Tejo that they have to find Rukmani soon. Tejo tells that Jass has traumatized Dilraj. She finds Jass returning home. She hides the phone. Fateh gets attacked in his academy, when he is leaving for home.

Jasmin thinks Jass will try to find out the truth from Tejo and may hurt her. She doesn’t want Jass to take her name. Fateh senses someone’s presence in the academy. He gets alert. Jasmin is worried for Fateh. Fateh gets kidnapped. Tejo learns that Jass has sent a goon to keep an eye on them. Jass gets Fateh beaten up. Tejo tells that if Jass didn’t return home at night, then he would be preparing for a new disaster. Fateh sees Jass and rages. Tejo worries that Fateh is in trouble.

Jass checks Tejo’s call on Fateh’s phone. He breaks the phone to break their connection. Fateh gets chained up and tortured. Jass asks Fateh what proof did he gather against him. He tells that now he has kidnapped Fateh, he will ask Khushbeer for a huge ransom, then he will leave for Canada. He gets a selfie clicked with Fateh. He asks the goon to send the picture to Khushbeer. He takes Fateh at gunpoint. He then leaves Fateh with his goons. How will Fateh escape now? Will Jasmin realize her grave mistake of alerting Jass and putting Fateh in danger? Stay tuned.

Reviewed Rating for Udaariyaan 26th October 2021 Written Update Fateh in danger: 4/5 This rating is solely based on the opinion of the writer. You may post your own take on the show in the comment section below.