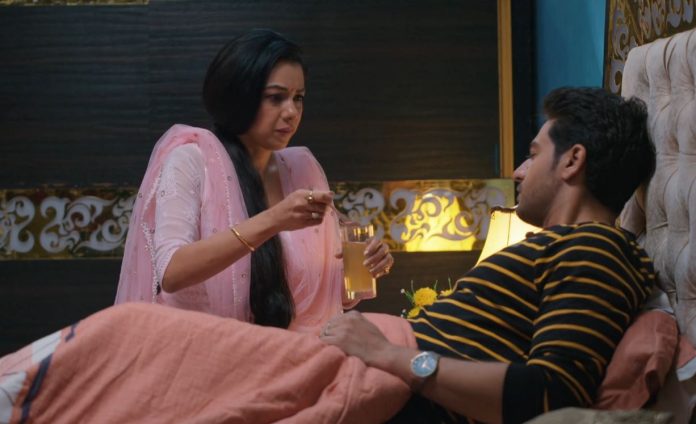 Anupama 28th October 2021 Written Update Pehla Nasha Anuj asks Anupama to inform Bapuji that the house they are living in is near the highway. Before Anupama could inform Bapuji about this, the phone line gets disconnected. Anuj tells Anupama that at least she informed Bapuji that she is alright. Anupama replied yes and Bapuji will inform GK too. Anuj says at least they got a roof to be safe from rains, storm, cloudburst, and deteriorating weather. Anupama says to Anuj that these children are so good who helped them.

She asks Anuj to give children their space, so that they can enjoy their party without getting awkward. Anupama calls Anuj and herself uncle and Aunty. Anuj says he is not an uncle. Anupama says at least she is aunty and explains to Anuj that there is nothing bad in being called uncle and Aunty. A girl present there calls Anuj and Anupama as uncle-aunty and asks them if they always fight this cutely. Anupama tells the kids that they don’t want to disturb them or their party. Children say they won’t mind Anuj and Anupama joining them.

Children show Anuapama and Anuj their reunion party and dance video. They say that it would be cool to party with them. Anuj and Anuapma feel shy. Anupama and Anuj sneeze. House owner’s child asks them to change their clothes as there are his parents’ clothes available in the house. Bapuji says he informed GK about Anuj and Anupama being alright. He asks everyone to sleep now. Vanraj asks Baa to sleep. Baa says she can’t sleep thinking Anupama and Anuj will be alone the whole night.

Children will see pictures of Anuj and Anuapma’s project bhoomi poojan. They get amazed thinking that Anuj and Anupama are business as well as life partners. Anuj thanks the children for the clothes. Girls there tell Anuj that he is looking like a dude in casual clothes. Anuj thanks them. Children apologize to Anuj for calling him uncle. Anuj replies that they can call him Anuj. He asks if they gave Anupama extra towels and clothes. Anuj gets amazed seeing Anupama looking beautiful in a pink suit. He recalls Anupama in similar clothes from their college time. “Pehla Nasha” plays in Anuj’s memories background. Anuj comes out of his imagination with Anupama’s push.

A boy named Rahul, proposes to a girl named Isha to be his girlfriend. Isha asks Rahul who takes so much time to propose, she was waiting for long to hear it. She accepts his proposal. Both of them hug. Rahul tells that he saw Isha for the first time the same day and same time at some party. Other children tell Isha that they planned the party for Rahul to propose to her. Anuj thinks if 26 years ago he would have shown this much courage the situation must have been different. Anupama and Anuj dance and enjoy with children and enjoy the song “Aakhri Mohabbat”. Anuj feels dizzy and unwell.

Anupama gets worried for him. Children ask Anuj to rest in a room. Anupama asks the children to take Anuj to a bedroom and she will make kadha. Vanraj feels unrelaxed thinking about Anuj and Anuapma being together. Anuj gets down with a fever. Anupama asks them to contact a nearby doctor. Children leave Anuj and Anupama alone. Anuj initially refuses to have kadha. Anupama calls him a kid and makes him drink the kadha. Anuj keeps blurting Anu in his unwell state. He says to Anupama that he wants to tell her something. Before Anuj could confess his love to Anupama a child interrupts them saying that they are not able to connect to any doctor. Anupama asks him to keep trying.

Anuj falls asleep. Anupama performs the hot and cold treatment on Anuj’s forehead to get his fever to a lower level. Vanraj who isn’t able to sleep calls back on the number from where Anupama called to inform Bapuji about her being alright and stuck. A child picks up the call and Vanraj asks him to make him talk to Anupama. Due to disturbance Vanraj and the child couldn’t talk properly. The child tells Vanraj that Anupama is taking care of an unwell Anuj. Vanraj fails to hear this. He hears the child saying that Anuj and Anuapma are resting in the bedroom.

This angers Vanraj and he disconnects the call. Next morning, Anuj finds Anupa sleeping on a sofa in his room. He understands that Anupama took care of him the whole night. He smiles and “Meri Duniya Hai Tujhme Kahin” plays in the background. He gets confirmed that Anupama gave him hot and cold cloth treatment. Anupama wakes up with the noise made by Anuj. He tells Anupama that he doesn’t know how he got so unwell last night. Anupama says she understands he got unwell because of getting wet in rain. Anuj apologizes. Anupama asks Anuj, if she would have got unwell in his place then he too would have taken care of her.

Anuj replies that of course he would have taken care of her as he can’t let anything happen to her. Anupama recalls that Anuj wanted to say something last night. Anuj asks Anupama if he crossed any limits last night? he apologizes. Anupama says if a person has no evil intentions, he/she cannot do any cheap things in any state of mind. She asks Anuj if he is still down with fever. Anuj says yes he still has a low fever. Both Anuj and Anupama decide to return home by booking a cab.

At Shah house, Vanraj recalls that a child told him that Anuj and Anupama are resting in a room. Samar informs Bapuji that Anupama called to inform that she and Anuj are leaving for home. Bapuji says he is going to meet his friend. Kavya instigates Vanraj and Baa saying that they should welcome Anupama with a pooja thali as she is returning after doing a big work. Vanraj takes a chair and sits near the main door. Samar recalls Vanraj doing the same thing in the past with a purpose to humiliate Anupama.

In the next episode, Vanraj will accuse Anupama for spending the night with Anuj in the same room. Anupama will get angry at Vanraj and call him Raavan. She will tell Vanraj that Agni Pariksha is given to Ram not Raavan. Baa will angrily shout at Anupama. Anupama will show her hand to Baa to signal her to shut down. Anupama will further announce that she is leaving the house.

Reviewed Rating for Anupama 28th October 2021 Written Update Pehla Nasha: 5/5 This rating is solely based on the opinion of the writer. You may post your own take on the show in the comment section below.