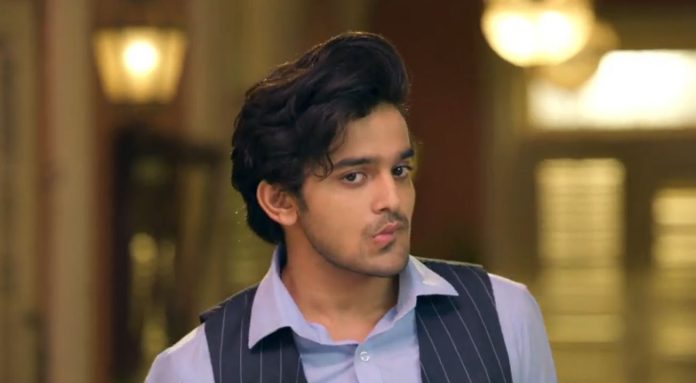 Barrister Babu 29th October 2021 Written Update Batuk shocks Bondita Bondita sees Batuk checking accounts and asks him that he never liked it and it was Batuk who always used to take interest and call himself Chote Zamindar babu. Batuk is tongue-tied. Bondita shows him the letters where someone practiced her handwriting and Tapur did not lie to Somnath and someone wrote a fake letter in her handwriting. Batuk checks the letters and realizes it is his work. Bondita insists Batuk to find out the culprit.

Bondita feels like vomiting and Batuk stretches out his hand to hold her vomit because Trilochan had told him to act like Anirudh. Trilochan smiles. Batuk runs as he feels like puking. Bondita follows him. Mallika sees all these and feels that Batuk is turning like Anirudh by acting like him. Bondita vomits more and Anirudh takes care of her reluctantly. Bondita realizes that she was wrong to think that Anirudh has changed a lot but in fact, he has not. Bondita asks Batuk to punish her but he tells her to rest. He makes her sleep and puts a bedsheet on her. Batuk loses control seeing his hand and feels like vomiting.

He washes his hand and says that he cannot handle Bondita as she is a mad woman and wonders how Anirudh handled her. Batuk wants Anirudh’s baby and decides to throw Bondita out of the house once he or she is born. Bondita gets up and romances Anirudh’s picture. Bondita gets a call from a telephone exchange and asks him to make her hear the audio recordings. She hears Anirudh’s voice and is shocked by his behavior. Bondita is not ready to believe it but his voice was there in the recordings.

Batuk gets his hands on Bondita’s trophy and feels angry seeing her as a popular barrister. He breaks her trophy into pieces and Bondita sees this. Bondita is heartbroken and questions Batuk why he broke her trophy. Bondita says that she has now understood that he is not Anirudh and someone else and asks him who he is. Bondita is stunned to see Anirudh change so much that he behaved like this. Bondita also reveals to Batuk that she got audio recordings of the person who kept rejecting her clients and it was his voice on the calls. Bondita expresses that at first, she thought that there was some misunderstanding but after seeing him break her trophy she cannot trust him.

Batuk apologizes to Bondita. He starts manipulating her and says that she should be a good wife and a mother but not a barrister. Bondita feels that he is not Anirudh and again asks him who he is and says that she doesn’t know him. Trilochan starts getting panicky. Sampurna intervenes and asks Anirudh to answer Bondita’s question as it is his duty as a husband to keep his wife informed. Batuk agrees and they all gather outside. Batuk tells Bondita that he felt jealous and says that he wants to be equal like her and not behind her.

He blames Bondita for neglecting him and admits that he used to feel great when people admired her work but now he doesn’t favor it. Batuk says that he feels bad when people ignore him and at the end of the day he is a human too and it bothers him. He asks Bondita to show him some respect as a husband. Batuk reveals that Bondita takes all decisions alone without asking him anything. Batuk apologizes to Bondita for breaking her trophy. He further indicates that he was the one who encouraged her in achieving her goal but she started behaving as she wanted. Batuk says that she makes him feel like she doesn’t care for him now as she has become a famous barrister.

He says that all these things disturbed him and he broke her trophy. Batuk says that his ego was triggered, making him behave like this. He tells her to start afresh and forget what all happened now. Batuk intimates to her that she is going to give birth to his child and that is why he wants to see her resting at home and not burden herself with court work. He advises her to stop practicing law and only focus on nurturing his baby’s health. Finally, Batuk gives an ultimatum to Bondita that if she loves him and their baby then she should do as he tells her or else he will understand that she loves law practice more than him and their baby.

Bondita cries and Batuk asks her to stop crying. Batuk gives his decision to Bondita about staying just a dutiful wife and a mother but not a barrister. He warns her to say that barrister Bondita is not available any more next time she gets a call from the clients. He asks her to think about their baby and then make a decision as he will not force it upon her. Batuk says I love you to Bondita and leaves. Batuk is also disturbed and sits alone playing his mouth organ. Sampurna pacifies Bondita and tries to make her understand that sometimes in a husband and wife relationship there are ego clashes.

Bondita is not ready to understand that Anirudh said all these things and refuses to believe it. Mallika is the silent spectator of the whole incident and plans to tell Bondita that Anirudh has died and the one disguised as Anirudh is Batuk. Mallika has enough of Bondita and decides to show her and Batuk’s picture. Bondita tells Sampurna that her Anirudh always respected her decisions and encouraged her to grow. Bondita is determined to discover what has brought such a vast change in Anirudh. Will Mallika tell the truth about Batuk to Bondita? Will Bondita find out Batuk’s true colors? Keep reading.

Reviewed Rating for Barrister Babu 29th October 2021 Written Update Batuk shocks Bondita: 3/5 This rating is solely based on the opinion of the writer. You may post your own take on the show in the comment section below.