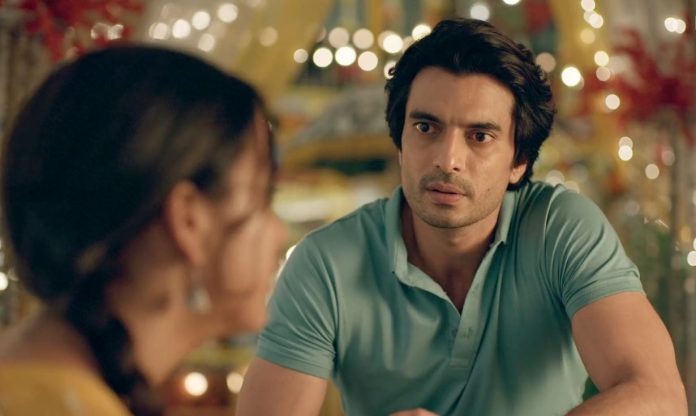 Imlie 28th October 2021 Written Update Aditya’s romantic gesture Tripathis welcome Chaturvedis and Meethi. Both the families greet each other. Dev takes blessings from Nani and Aditya touches Meethi’s feet by greeting her. Meethi blesses Aditya to always be happy. Aditya greets Dev too. He gets a call and goes to take it. He informs everyone that he needs to take the call as he is working from home. Malini and Anu feel bad for thay Aditya didn’t talk to or greet Anu.

Aparna asks forgiveness from Meethi for her and her family’s past bad behavior with her and lmlie. Meethi forgives them and says she is happy that they accepted Imlie as their family and it is enough for her. Meethi tells Tripathis that she cooked food for everyone. Aparna asks Meethi not to tell lmlie anything as they want to surprise her. Imlie runs and hugs Meethi. Aparna asks Imlie to iron everybody’s garba clothes. Imlie happily agrees to do it. She leaves singing a cute song. Everyone except Anu and Malini smiles seeing Imlie’s cute antics.

Everyone except Anu and Malini leaves for breakfast. Malini tells Anu that she can’t tolerate their happiness and celebrations. She asks for help from Anu. Anu in an evil manner asks Malini to not worry as they will too plan a surprise for Imlie and Meethi. Imlie keeps the garna clothes on a table and leaves to bring Iron. Malini asks what she is doing with a mouse. Anu asks Malini to not get scared as this mouse will tear and ruin Tripathis Garba clothes and Imlie will get blamed for it.

Imlie gets tensed thinking the mouse ruined the clothes Tripathis got stitched for themselves for Garba night. She thinks she will get scolded by everyone and thus she will lose the respect left. Everyone gets scared by the same mouse and runs here and there. Harish asks the mouse on his shoulder to get down from his shoulder. Mouse jumps and ruins the decoration made by Tripathis for lmlie. Aparna says now what will happen to Imlie’s surprise. Imlie asks what will happen to whom? Aparna changes the topic. Imlie says she will handle it.

Anu indirectly says to Tripathis that they have kept so many village people in their home, so mice will enter their home too. Nani scolds Anu and calls her a thief. Aditya tok comes there. Imlie stops Anu from killing the mouse with a magazine. She asks Anu, she hasn’t left the habit of raising hands on weaker people. Anu asks Imlie to leave her hand and kill the mouse. Imlie tells Anu that she can’t see anybody killing a living thing. Imlie takes the mouse in her hand. She asks everyone to not get scared of the mouse and not scare the mouse too. Imlie asks everyone to think of this mouse as Lord Ganesha’s vehicle (Munshak Raj). She asks everyone to thank whoever brought this mouse to their house.

Nishant tells Imlie that the mice ate all the sweets. Imie makes all the three mice eat the ladoos. Except Malini and Anu everyone claps for Imlie. Malini asks Anu to see that everything got alright. Anu asks Malini to see all the three mice ruined Tripathi’s surprise for Imlie. She further asks Malinj to see what surprise Tripathis will give to Imlie. Aparna says their Garba night preparations got ruined and asks what will they do now? Imlie says leave it to her. Radha by mistake starts blurting out the surprise for Imlie but stops. Rupi says that mice ruined their clothes. Harish says mice ruined decorations, food and clothes.

Malini and Anu get happy. Alone, Malini praises Anu’s plan. Anu tells Malini that she is happy seeing her happy. Malini says something good is happening after a long time. She also tells Anu that she can’t see Tripathis accepting Imlie. They further discuss finding a permanent solution to not let Imlie get accepted by Tripathis. Anu says she will think about it too. Dev comes there and asks them if they have any shame. He asks them what happiness they get by planning and plotting. He further says that Imlie even did not know about the surprise planned by Tripathis for her. Dev says to Anu and Malini that they snatched even a little happiness from Imlie.

Anu accuses Imlie of snatching Malini’s husband. She says she will snatch every moment from Imlie that will give her happiness. Tripathis are seen sad about ruined decorations, food and clothes. Aditya asks Tripathis to just tell Imlie that they kept a surprise to accept her. He tells everyone that Imlie will get happy only by hearing that they have accepted her. Harish says they made so much efforts to surprise Imlie. Imlie comes there and asks why they are sad. They tell lmlie that they can’t play Garba in ruined clothes.

Imlie says she will make everything right. Imlie starts giving instructions. She asks Sundar, Aparna and Radha to prepare prasad again. Imlie further asks Nishant, Aditya and Rupi to clean the house. At last she asks Meethi and Nani to come with her. Aparna asks Imlie what is she planning to do? Imlie replies that she is trying to do some “jugaad”. Everyone leaves to do their assigned work. Malini and Anu are left rritated. Imlie starts stitching the torn clothes. She then finishes her work and returns the clothes to all the family members. Everyone praises Imlie. She jokes with Pankaj and Harish.

Everyone is seen ready for Garba. Each and everyone praise Imlie and her efforts. Anu and Malini gets angry when Aparna says her daughter-in-law (Imlie) is best. Radha says there is nobody like lmlie. This angers Malini and Anu more. Malini asks Anu to see Imlie won like always and family will accept her after the Garba. Anu apologizes to Malini and says she is not able to think what to do now. Rupi asks where lmlie is? Meethi goes to call Imlie. Next Imlie is seen tensed for not being able to stitch her ruined dupatta. Aditya comes to help Imlie and starts stitching her dupatta. Imlie initially jokes with Aditya. Later on, she seems amazed by Aditya’s efforts and love for her.

Imlie asks Aditya how he knows to do girly things. Aditya reveals that he learnt all this because of work as he can’t find a tailor everywhere he goes for work. He jokes with Imlie and calls her Jhalli. Imlie tries leaving but Aditya stops her and both of them get romantic. He covers Imlie’s head with the dupatta he stitched. Meethi unintentionally ruins their romance. Imlie leaves and Aditya says Meethi’s timing was wrong.

In the next episode, Tripathi will enjoy Dandiya. Malini and Anu will get angry seeing Imlie and Aditya happily playing dandiya/garba with each other. Anu will take Dandiya from Malini and run to injure or hurt Imlie. She will fail in her plan and Tripathis will get shocked seeing her behavior.

Reviewed Rating for Imlie 28th October 2021 Written Update Aditya’s romantic gesture: 4/5 This rating is solely based on the opinion of the writer. You may post your own take on the show in the comment section below.