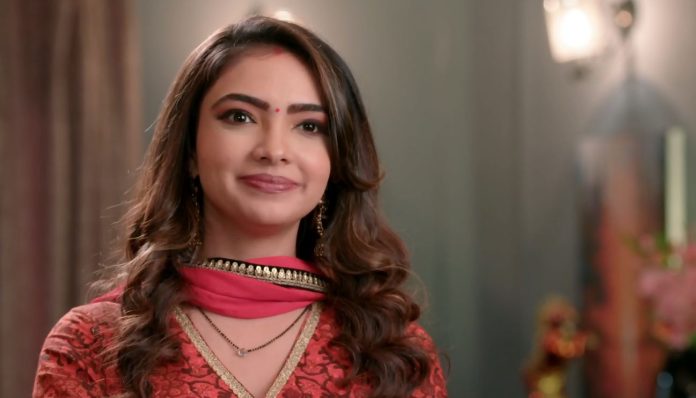 Kumkum Bhagya 29th October 2021 Written Update Filthy Rhea Gaurav tells Aaliya that Abhi isn’t getting punished for being a culprit, but because of his innocence. He is getting punished due to Pragya’s rigid decision. He asks Aaliya to wait for some time and then see how the judge punishes Abhi by declaring the verdict. He tells that they shall see if Abhi gets an imprisonment or death sentence. He doesn’t think anyone can save Abhi now. Aaliya gets worried for her brother, when she finds the judge declaring Abhi guilty. She wants to stop the judge from declaring the verdict. Pragya goes to the police station to meet Abhi. He tells her that he is really glad to be her inspiration, and receive the credit for her success, but he will not be able to live if he becomes a reason for her destruction.

Meanwhile, Siddharth pampers Prachi by making sweets for her. Ranbir asks him how does he always come in between them. Rhea also taunts that Siddharth never made a cup of tea for her till now, but he has made sweets for Prachi. She asks Ranbir to see the bonding between Siddharth and Prachi. She continues to fill the filth in Ranbir’s mind.

Pragya tells Sushma that Abhi asked her not to give anything to Gaurav. Sushma tells that it will be a big mistake to make Gaurav succeed in his revenge, he will still show his true colours after snatching everything from her. She asks Pragya not to take any decision until she comes home. She tells that she is leaving her home right away. Gaurav tells his dad that Pragya will make a big mistake if she gives everything to him. He calls Pragya and asks her to decide it soon if she wants Abhi’s freedom. He tells that she just has some time left, because he is leaving for abroad.

Pragya asks him to keep the papers ready. He gets glad that his plan is working. He calls Aaliya and tells her that Pragya is coming to give him everything. Aaliya asks him to free Abhi from the blame. Tanu asks for her share. Gaurav tells that they will get their share. He doesn’t want anything to go wrong. He tells his dad that his plan is on, he has prepared everything in advance. Mitali overhears Aaliya and Tanu’s conversation. She scolds them for not sparing their own house. She tells them that they shall at least spare Abhi, if not Pragya. She hates them. Tanu asks her to use her mind.

She finds their mind evil. She scolds them for the first time. She rebukes Aaliya for selling Abhi to Gaurav. She asks her to at least respect Abhi and Pragya, who have given them many chances. Mitali starts laughing and tells them that she was just practicing to scold them when they get caught. Tanu asks her not to crack such useless jokes. Aaliya tells that Mitali’s fate will get on stake if she jokes such again. Mitali leaves.

She stops there and secures her future by asking for her share, once Gaurav pays them. Aaliya asks her not to blackmail them. She agrees to give her share. Tanu insults Mitali. Tai ji overhears their talks. She also gets hint of their plans. Aaliya and Tanu get happy that Mitali didn’t challenge them. They make fun of Mitali behind her back. Tai ji tells Mitali that they will be happy even if they get some part of the share. She is worried that the family will break if Aaliya’s crime gets known to Abhi and Pragya. She wants to be in the winning team. She tells that Gaurav and Aaliya are together, they are behind Abhi’s arrest, once Abhi comes back, they shall leave the house. She tells that Abhi is happy with Pragya.

Thapar asks Gaurav how is he confident that Pragya will give away everything for her useless husband. He feels Pragya’s husband is totally worthless for her, why would she pay for him. Gaurav tells him that Abhi and Pragya have much love for them, Abhi has madness for Pragya, he is her husband, they both have the same madness of true love. He tells that Pragya can do anything for her loving husband, she will come and also sign the papers. Pragya arrives at Gaurav’s house. She asks him to give the papers. She tells that she isn’t losing anything, but gaining her everything.

She knows that he would not write anything more than she thinks. She doesn’t care what papers he has made legally. She doesn’t read the papers and signs on it. He asks her why does she love Abhi so much. She asks him why does he love money so much. He tells that he can’t explain. She tells that Abhi is her Kumkum and Bhagya, none can snatch her fate from him. She doesn’t care of losing anything. He tells that her attitude won’t help her. She asks him not to worry for her and just hand over the proof. He sends her the video. He asks her to check the proof once. Pragya checks the video. She finds Abhi’s conversation with the contractor. Thapar checks the papers.

He is surprised that Pragya signed the papers so easily. Gaurav tells that he isn’t excited after winning so much. He recalls the way Abhi insulted him. Thapar asks him what is he planning. Gaurav tells that he will not give any proof to Pragya, he has changed his mind. He tells Thapar that Pragya will soon call him. Elsewhere, Prachi gets a nightmare and wakes up. She worries for Pragya. Ranbir pacifies her. She tells him that she doesn’t want any medicine, she wants to talk to Prachi.

He asks her to rest in the state of fever. She worries for his meeting. He tells that nothing is important to him than her. He sits caring for her and confesses how much he loves her. Siddharth meets them and learns that Prachi is unwell. Siddharth tells Prachi that they have an important meeting. Ranbir tells that he will look after his wife. Siddharth asks them to stay well. Prachi feels lucky to have Ranbir by her side. Pragya reaches the police station and waits for the Inspector. She informs Sushma that she has signed the papers and got the video evidence from Gaurav. She tells that the hearing is in the morning, she had to sign the papers some how. Sushma asks her why didn’t she wait for her return.

She is scared that Gaurav will do anything worse. She tells that she has taken a step to fail Gaurav’s plan. Pragya doesn’t hear that. She tells that she will talk to her later. She asks the Inspector to check the video evidence of Abhi’s conversation with the contractor. She tells that the video isn’t playing. He tells her that the video got deleted after watching once, Gaurav has fooled her. She realizes that Gaurav has still cheated her. She pleads for Abhi. Inspector tells that the evidence need to be shown in the court. She asks him to believe her. He asks her to ask Gaurav to resend the video once again. Gaurav reaches Pragya to shock her. Stay tuned.

Reviewed Rating for Kumkum Bhagya 29th October 2021 Written Update Filthy Rhea: 2/5 This rating is solely based on the opinion of the writer. You may post your own take on the show in the comment section below.