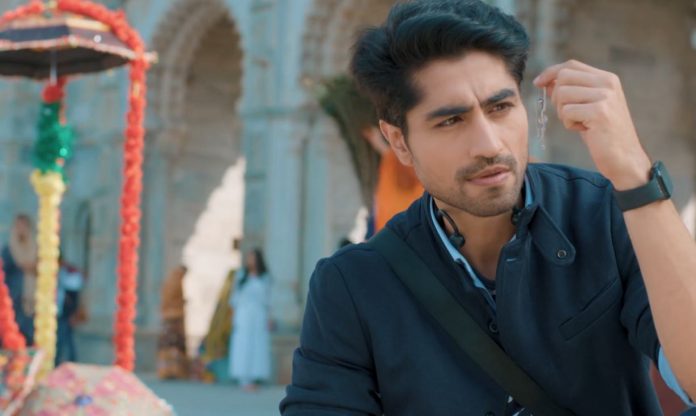 Yeh Rishta New amazing start 28th October 2021 Written Update Abhimanyu stops his bike mesmerized by Akshu’s sweet voice and searches for her. He finds her pendant and smiles. Harshavardhan calls Abhimanyu and he finally reaches the hospital. A boy is scared of the operation and refuses to go to OT because Yamraj will take his life. Abhimanyu comes there dressed as Yamraj to convince the boy. The boy is amused by Abhimanyu’s tactics. Harshavardhan argues with Abhimanyu that he was needed for a check-up but Abhimanyu replies that he felt that he had to be in OT first.

Harshavardhan is furious at Abhimanyu and warns him that if he was not his son he would have expelled him a long time back. Abhimanyu bluntly replies that he cannot do so as he is needed to uplift his business. Harshavardhan is shocked at Abhimanyu’s words. Akshu comes home depressed. Manish tries to make Akshu understand that forgiving Arohi and going after her all the time will make her ruder and behave wrongly with her. Akshu refuses to stop chasing Arohi as she feels that it was Arohi who called her home. Akshu learns the harsh truth that Kairav had told a lie to her in Arohi’s name so that she comes home back.

Akshu is sad and Vansh suggests going for her NGO interview. Akshu is in no mood to go and says that she will go the next day. The Goenkas ask her to not ever mix personal and professional life and Suhasini decides to go with her for an outing. Kairav is tensed about Arohi’s behavior and Vansh assures him that everything will be fine soon. Harshavardhan complains about Abhimanyu’s behavior to his elder brother but he supports him saying that he is right and following his teachings only as different patients need different tactics.

Doctor Mahima (sister-in-law) taunts Harshavardhan that Abhimanyu’s Yamraj act can be used as a PR stunt for the hospital. The media comes to the hospital to take Abhimanyu’s interview. Mahima decides to go with her husband but he tells her to stay back as he will only speak in front of them. Harshavardhan taunts Mahima that despite brilliant achievements she will always remain few steps away from his elder brother. Arohi is impressed by seeing Abhimanyu’s picture online and finds him hot. She decides to meet him.

Akshu goes for an interview at Mahima’s NGO. She expresses to her that she wants to cure people by Music therapy but Mahima dislikes it. Mahima shouts at Akshu that rich brats like her will never understand the pain of other people and tells her that she has made a joke out of social work. Akshu remembers Sirat’s death and Arohi’s hate. Mahima asks her to leave. Akshu gets a panic attack and Suhasini takes her to the hospital. Arohi decides to go to Birla hospital and meet Abhimanyu. Suhasini asks Akshu to leave social work and get married as she just prayed to God that she should get a good life partner. An intern goes to Abhimanyu and insists him to check Health Minister’s daughter Ruby or else Harshvardhan will terminate his internship and also not give him a certificate.

Abhimanyu thinks that when Harshavarshan cannot use his power to manipulate him he targets young interns to convince him to act as he wants. Abhimanyu asks the intern to go as he is coming. Abhimanyu decides to see the health minister’s daughter and goes to check Ruby. Arohi reaches Birla hospital and decides to meet doctor Abhimanyu. Suhasini also takes Akshu to Birla hospital as she is feeling uneasy and cannot breathe. Abhimanyu, Arohi, and Akshu are shown in the same frame. Suhasini makes Akshu sleep on the bed and insists the nurse to call the doctor. Abhimanyu slips on Suhasini’s walking stick and falls on Akshu. They both have a romantic moment.

Reviewed Rating for Yeh Rishta New amazing start 28th October 2021 Written Update: 2/5 This rating is solely based on the opinion of the writer. You may post your own take on the show in the comment section below.