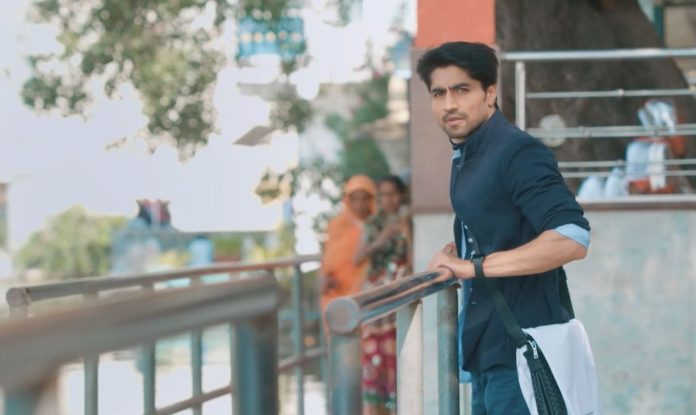 Yeh Rishta 29th October 2021 Written Update Abhimanyu falls for Akshara Abhimanyu goes to check Ruby. Suhasini takes Akshara up in the lift. Arohi too reaches inside the hospital to meet Abhimanyu. Suhasini tells Akshara that she has a dream about a boy for her who is very nice. Suhasini asks Akshara to relax and her stick falls down. Abhimanyu decides to teach the health minister’s daughter a good lesson. Suhasini asks the nurse to call for a doctor immediately. Abhimanyu reaches Akshu’s room and slips on her. They both stare into each other’s eyes. Abhimanyu gets up abruptly and loses balance again making him fall on Akshara again. Akshara hides herself with a blanket to save herself.

Abhimanyu observes that Akshara is having a panic attack and asks Suhasini what she likes doing. Suhasini says singing and Abhimanyu asks her to sing. Akshara sings Lord Krishna’s song and Abhimanyu realizes she is the same girl he was searching for sometime back. Abhimanyu is still fallen on Akshara and Suhasini asks him to get up or Akshara will get suffocated. Abhimanyu gets up and wonders how the girl looks. A fellow doctor comes and informs Abhimanyu that he has come into the wrong room and the health minister’s daughter is in another room. Abhimanyu leaves.

Akshara asks Suhasini who was that doctor and the nurse informs her that he was doctor Abhimanyu Birla, the best heart surgeon. Akshara remembers that he is the same person because of whom she and Arohi had a fight. Arohi is dying to meet Abhimanyu and gets angry at the staff because they are making her roam the hospital. The boy informs Arohi that Abhimanyu is busy as he has an appointment with the health minister’s daughter. Arohi feels that if Abhimanyu doesn’t have the time to meet her then she will make it happen because she needs his time.

Abhimanyu informs the intern that he checked Ruby and tells him to convey to Harshavardhan that he has prescribed a normal digestive tablet from the general store. Arohi hits Abhimanyu’s bike and he comes running to pick it up. Arohi introduces herself to Abhimanyu but he ignores her and goes away. Arohi finds Abhimanyu interesting. Abhimanyu goes inside the hospital humming a tune. He decides to check on Akshara and find out how she is.

Abhimanyu doesn’t find Akshara but picks up her pendant and earring. Suhasini and Akshara reach home and she tells her to sit in the open air as she will send her a juice. Kairav apologizes for lying to Akshara and becomes emotional. Akshara asks him why he lied and Kairav says that he was missing her and all the family members suffered when she left. Akshara also admits that she too had a difficult time staying away from her house and family members. Abhimanyu enters his home and has a sweet banter with his younger sister. Mahima and Anand taunt their son Parth for taking a doctor’s degree and not practicing. Mahima asks Abhimanyu to make Manjiri understand that helpers are there then why does she work. Manjiri says that she likes to do it.

Harshavardhan goes on scolding Abhimanyu and he gets angry. Manjiri tries to pacify him but Abhimanyu is not able to control himself. Harshavardhan says that he has been told several times that hospital works on the influence of powerful people and he is never ready to understand it. Harshavardhan asks Abhimanyu to stop banging his plate and warns him to not be like his mother by eating her ghee-rich food. Abhimanyu gets up angrily from his chair and stares at his father. Manjiri stops him and Abhimanyu leaves without having food. Akshara enters her room after many years and recalls her childhood memories.

Akshara imagines a sisterly dance sequence with Arohi in her room alongside a younger version of Akshu and Arohi dancing with them. Akshara gets up from her sleep but sees Arohi, Vansh, and Kairav’s pictures everywhere and she feels sad. Abhimanyu and his family are having a photoshoot in their house for a renowned magazine and he sees his mother work. Arohi tells Akshu that she was happy for three years when she was not here. Abhimanyu brings his mother but the photographer says that he needs only doctors in the frame and he replies that every doctor’s first doctor is his mother. Akshu tells Arohi that if her absence gives her happiness then she will never come home. Will Akshara will be successful in creating a place in Arohi’s heart? Keep reading.

Reviewed Rating for Yeh Rishta 29th October 2021 Written Update Abhimanyu falls for Akshara: 3/5 This rating is solely based on the opinion of the writer. You may post your own take on the show in the comment section below.