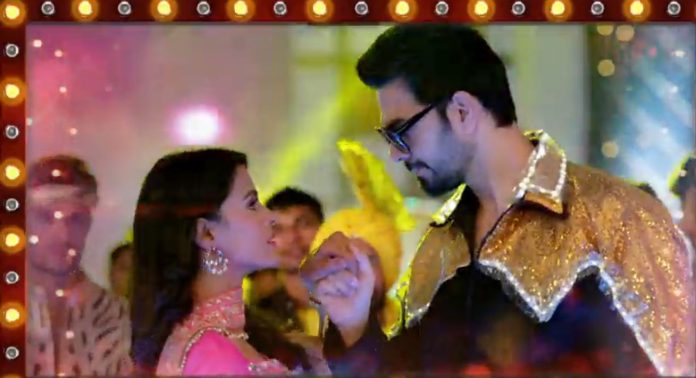 Udaariyaan 1st November 2021 Written Update Diwali special Tejo sings praises of Angad. Tejo and Fateh await Angad at the academy. Angad meets the boxers and gets into a fight himself to see how strong they are. He really likes the academy and trainees. Angad’s cool behavior and friendly side towards Tejo gets realized by Fateh, who slowly gets jealous seeing their bonding. Fateh feels odd when he finds Angad taking interest in Tejo. Angad mostly addresses Tejo and talks to her, ignoring Fateh. Angad likes Fateh and compliments him as much. He feels his trip to the academy is worth investing the money.

He asks Fateh to continue the boxing and inspire the Punjab youth, who has much potential in sports. Angad jokingly tells that he feels the same thing which Tejo feels/thinks. He seals the deal with Tejo. Angad tells Tejo that he is ready to invest, he can make the academy as big as she wants. He asks her to throw a big party where they will be declaring their partnership. Tejo is really happy that Fateh’s problems will end.

Angad tells them that they have to make the party arrangements themselves at his farmhouse, and make everything rock in the Diwali party. He wants everything to be the best. He chooses a bollywood theme party. Tejo finds Angad a good-hearted and frank person, without any fake pretence. Angad makes a leave from there, making Fateh further think about him. Fateh likes to see Tejo smiling.

Fateh and Tejo get busy in planning the party for Angad Maan. Fateh assures her that he is always with her, in everything she does. He doesn’t want Tejo to get stressed. Tejo’s worries end when she gets Fateh and the loving families on her side. The families share Tejo’s load and help her out. Tejo and Fateh agree to take the family’s help. Jasmin thinks Fateh will come in her words after a little bit of fake tea shed. Jasmin sees them getting the support from both the families. She wants to get engaged with Fateh in the same Diwali party. Tejo and Angad perform in the party, making Fateh realize the first ever jealousy. Keep reading.

Jasmin seeks Fateh’s attention. She tells him that she also wants to help in the party arrangements, just like Tejo. She asks him to trust her, she can handle things well. Tejo invites her friends. She takes care of all the arrangements, with the family’s help. Fateh asks Jasmin not to spoil the event, Angad is a big investor, they really need him, Angad can help Khushbeer regain his lost pride. He asks Jasmin not to get involved, but she requests him. She wants to take part, since she plans her engagement in the party.

Fateh gives in to her demand. He asks her to handle whatever she wants, but without making any mistake. Jass calls Jasmin from the call and threatens to expose her. Jasmin gets worried. He lies to Fateh that its a friend’s call. Jass tells her that she didn’t pay him any money, and got him arrested. He adds that he will come out some how and then expose her truth to Fateh, then she will have no one with her. Jasmin grows worried and begs him to not say so. She asks his demands. He asks her to get him bailed out as soon as possible, else he will ruin her life. Being at fault, she gets blackmailed by Jass.

She agrees to get him bailed out, but doesn’t know how will she manage everything. She goes to meet Jass and gets his bail done. She asks Jass not to mess up with her now, since she has done more than the neeful for him. Jass angrily hurts her. Jasmin tells him that if Fateh spots him, then he will kill him. Jass isn’t scared of Fateh. He wants to ruin Fateh and Tejo’s happiness. After he leaves from the jail, he reaches Tejo and secretly follows her. He learns about the event Tejo is handling for Fateh’s academy.

He plans to ruin the event, and also ruin Fateh, Tejo and Jasmin’s lives. He gets mad for his revenge. Fateh and Tejo get busy in their event management, while Jass reaches there to create a havoc. Tejo plans the star-studded event to please Angad, for the sake of Virk family. Fateh appreciates her efforts. Fateh and Tejo get into a moment. Jass stops midway when his bike tyre gets punctured. He wonders how will he reach the party in time. He comes across Angad Maan, who gets friendly and helpful. Angad gives him lift, on knowing that even Jass is going in the same party. Angad reaches the party and loves the arrangements.

Fateh welcomes him in the party. Angad unknowingly gets the troubles in the party. Jass plans to explode a bomb and ruin the party completely. Fateh and Angad get into a friendly talk. Jass hides from Fateh. Jasmin and Angad have a collision. She gets rude and yells at him, showing her truth to him so soon. Jasmin goes away being irritated. Jasmin and Fateh find Tejo dancing on the stage. Jasmin can’t tolerate Tejo getting all the attention. She drops the marbles on the stage to make Tejo fall down. Fateh tries to rush and save Tejo from the fall. Angad reaches the stage before Fateh, and takes care of Tejo.

He dances with Tejo and completes her performance. He gets into a romantic moment with Tejo. Fateh grows jealous seeing them. Jasmin doesn’t know that the guy who collided with her is actually the rich business tycoon, Angad Maan. Fateh goes away from there. Jasmin asks Fateh about Angad. Fateh tells her about Angad, who is the hero of the night. He tells that they really need Angad as their investor. Angad learns from Tejo that she is soon getting divorced. He jokes that his way will get cleared, he is really lucky to have her. Tejo laughs off on his sense of humour. Fateh asks Jasmin not to make any mistake today.

Virk and Sandhu families come to the party. They meet Angad, who is really happy to meet them. Fateh can’t help his heart, that grows restless seeing Tejo with Angad. Tejo is happy when Angad is around. Gurpreet and Khushbeer also find her happy. Gurpreet takes Tejo with her and gifts her a necklace. Jasmin grows jealous seeing Tejo getting all the love and gifts that belong to her. Tejo refuses to accept the expensive necklace. Khushbeer tells Tejo that she deserves it. He appreciates the efforts she had put into the academy for Fateh and family’s sake. He asks Tejo to accept the necklace as their blessing.

Jasmin wants to have her engagement in the same event, and snatch the limelight from Tejo. Tejo and Fateh handle the event well. They line up the performances from the celebs. Tejo makes sure that the event is a big success. She wants Angad’s partnership at any cost for the academy’s prospering. Fateh likes Angad, who is a real good man. Angad tells that their partnership is mutual, its a new start for both of them. Angad also gets protective towards Tejo. Jasmin tries to spoil the fun by getting close to Fateh. Jass wants to expose Jasmin’s real face in front of Fateh and families. He is pretty sure that she will lose everything so badly when her truth comes out. Jass plans a big blast, and waits for the right time.

Jasmin performs with the celebs, and gets Fateh and Angad on the stage with her. She wants Angad to know that she is Fateh’s would be wife. Angad gets to see Jass, who is staring at Tejo. He gets suspicious. Jasmin dances with Fateh closely, and makes Tejo grow upset. Angad understands Tejo’s changing expressions. He tries to cheer up Tejo. More celebs from the Colors’ channel come up with their performances. Tejo goes to check few arrangements. Jass tries finding a chance to kidnap Tejo. Jasmin spots him and is tensed. She doesn’t want her truth to come out. Angad informs Tejo about her friend. She is clueless. Jasmin goes to find Jass and deal with him, before her truth comes out.

Jasmin doesn’t find Jass anywhere and thinks she was just imagining. She gets relieved that Jass isn’t in the party. Fateh awaits his friends in the party. After the dance performances, Tejo asks Fateh to check the presentation which is left for the last. Fateh and Tejo thank the guests for coming, and present the academy presentation for Angad. Jasmin changes the presentation and plays a song to come on the stage and woo Fateh by her dance. She shocks Fateh and both the families by her shameful act once again. Angad wants to know who is she. She shocks the families by thanking the guests to be a part of her engagement party. She asks Fateh to put the engagement ring on her finger and get engaged to her, since its the best day for them, their families and friends are all around to bless them. Fateh is shocked by her unexpected move. He refuses to Jasmin. Jass goes to take revenge on them. Keep reading.

Reviewed Rating for Udaariyaan 1st November 2021 Written Update Diwali special: 4/5 This rating is solely based on the opinion of the writer. You may post your own take on the show in the comment section below.