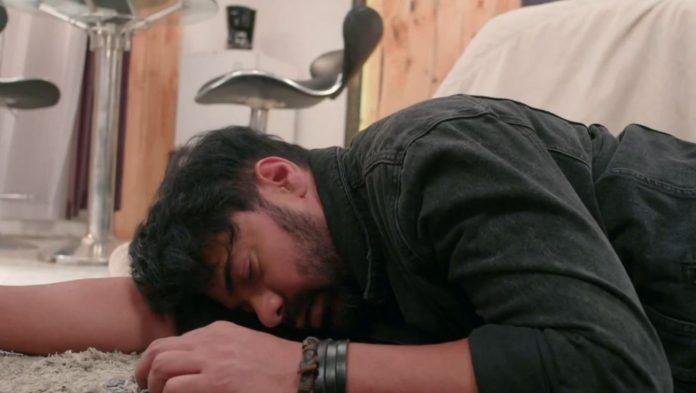 Kumkum Bhagya 5th November 2021 Written Update Gaurav attacks Abhi Abhi reaches the hotel to meet Gaurav. Tanu attacks Aaliya and tells that she will kill her before Abhi dies. Pragya hears their argument and asks them to stop it. She asks the reason for their fight. Aaliya tells that she will kill Tanu, who wants Abhi to die by Gaurav’s hands. Pragya is shocked to know it. Tanu tells that Gaurav has planned to kill Abhi, and she just agreed to it. Aaliya tells that Tanu has encouraged Gaurav further.

Tanu asks Aaliya to admit her crime plotting. Pragya is moved by the shocking revelation. Pragya slaps Tanu in anger. Tanu gets mad at both Pragya and Aaliya, who want to save Abhi. Abhi gets into an argument with Gaurav, while the latter tricks him and takes a glass bottle to hit. Gaurav attacks Abhi by breaking the bottle on Abhi’s head. Abhi tries to fight him, but in vain. Abhi falls unconscious right there. Gaurav wants to kill him, and take his revenge on Pragya. Pragya and Aaliya deal with Tanu, and rush to the hotel to save Abhi.

On the other hand, Rhea fills up Ranbir’s mind against Siddharth and Prachi. Siddharth and Prachi happen to fall on the bed, and laugh. Ranbir breaks into the room at the same time, and finds them together on the bed. He loses his mind and recalls Rhea’s words. He shouts Prachi and shocks her. Will Ranbir lose his faith on his wife? Will Gaurav try to kill Abhi? Will Pragya reach Abhi on time and protect him? Keep reading.

Tanu tells Pragya that Gaurav’s molestation case was Aaliya’s idea, Aaliya wanted to ruin Pragya. Pragya is shocked when Aaliya admits that she wanted to ruin Pragya down, but she isn’t responsible for Abhi’s condition. She tells that she always wished good for Abhi. She tells Pragya that Gaurav told everything in anger, but Tanu encouraged him to kill Abhi. Pragya asks them where did Abhi go to meet Gaurav. Aaliya tells the hotel’s name. Pragya asks the right name, because she can’t waste her time.

Pragya gives her diamond ring to Tanu. Tanu confirms the hotel name after taking the ring. Pragya gives her a tight slap. She rebukes Tanu and leaves. Abhi reaches the hotel to meet Gaurav. Gaurav awaits him and had revenge on his mind. Pragya drives in a rush. She calls Abhi. She asks Abhi to reach home. She asks him to come back right away and not meet Gaurav. He asks her why didn’t she tell him that she gave her everything just to save him. She tells that his life is equal to two worlds for him. She asks him not to risk his life. He tells that he can forgive Gaurav for doing wrong with him, but he can’t forgive Gaurav for wanting to ruin Pragya. He wants to punish Gaurav.

He is much angered. He tells that if Gaurav refuses to apologize to her, then he has to pay for it. She asks him not to go to him, Gaurav has planned to kill him. He tells that Gaurav can’t harm him. He adds that its necessary for them. She tells that she still has her properties and business, she didn’t lose anything all thanks to Sushma. She asks him to come back. He tells that he had given his word, he can’t come back without meeting Gaurav. She prays for Abhi’s safety. She speeds the car to reach the hotel.

Gaurav calls the goon to deal with Abhi. He asks them to kill Abhi when he comes, then they will get paid. Goon tells that they can get recorded in the cctv footage, they have to remove the cctv cameras first. He asks Gaurav the plan. Abhi lands in a big trouble. Gaurav shares his plan with the goons, who compliment his evil mind and tell him that he can be a good gangster. Gaurav asks them not to hit Abhi in a way that they leave any evidence. He doesn’t want to get trapped in the murder case. He wants Abhi’s death to appear as an accident. Pragya gets stuck on the way because of a closed route.

She tries to convince the constable. He lets her go ahead when she pleads that its about her husband’s life. Abhi reaches Gaurav’s room. Gaurav asks the goons to hide and come when he signals them to attack Abhi. Gaurav welcomes Abhi. Abhi asks him if he has made a plan to kill him. Gaurav asks him to lessen his anger by taking a deep breath. He asks Abhi to sit and have a drink. Abhi asks him to apologize to Pragya. Gaurav tells that he doesn’t owe an apology. He admits that he is responsible for the building collapse. He angers Abhi to engage him into a fight. Abhi finds Gaurav disgusting.

Gaurav tells that poor people are born to die. He adds that he doesn’t have any regret, he will not apologize to anyone. Abhi catches his collar to rebuke him for his evil act. He insists Gaurav to apologize to Pragya for the fraud. He tells that Gaurav wanted to take away Pragya’s properties. Gaurav refuses to him. Abhi attacks him. Gaurav calls the goons to save him. The goons make Abhi away and try to faint him down. Abhi fights the goons. He gets rid of the goons. Gaurav tells Abhi that they can talk. Abhi beats up Gaurav as well. Abhi ties up Gaurav.

He compels Gaurav to come with him and apologize to Pragya. Pragya reaches the hotel and goes to Gaurav’s room. Abhi tells that Gaurav will be going to the jail, since he has recorded his crime confession. Thapar comes there in time and attacks Abhi. Abhi tells that he doesn’t attack elders, that’s why he is sparing him. Gaurav frees himself. He faints down Abhi by the chloroform. Gaurav gets thankful that his dad came in time and saved him from the arrest. Thapar asks Gaurav to always inform his plans. Gaurav tells that he has planned to kill Abhi. He hides Abhi from Pragya and takes him away.

Pragya doesn’t see Abhi. She reaches Gaurav’s room. She doesn’t find Abhi there. She gets his phone and realizes that he had reached there to meet Gaurav. She sees the unconscious goons. She understands the fight that took place. Thapar tells that he came on time to save Gaurav. Gaurav tells that he had defended himself, he can’t attack Abhi to show his death as a murder. Thapar asks him to delete the call recording from Abhi’s phone. Gaurav finds his phone missing. Thapar tells that the phone would have fallen in the room, they have to get the phone. Pragya worries for Abhi. Stay tuned.

Reviewed Rating for Kumkum Bhagya 5th November 2021 Written Update Gaurav attacks Abhi: 3/5 This rating is solely based on the opinion of the writer. You may post your own take on the show in the comment section below.