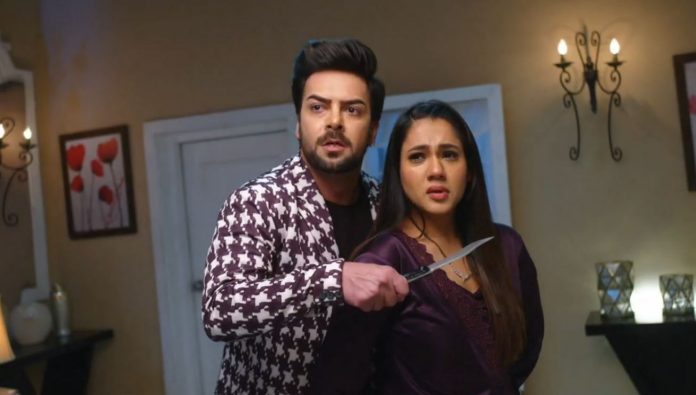 Kundali Bhagya 5th November 2021 Written Update Kritika targeted Preeta shouts aloud that Prithvi is trapped from all sides now. Prithvi is shell shocked to see Luthras watching him. He comes up with a drama that they are misunderstanding him. Shrishti asks does he think they are mad to believe him. He tells that he was sleeping in his room, he doesn’t know how the knife came into his hand, he was sleepwalking. Rakhi, Kareena and Bani come to face him. Kareena tells that he doesn’t look like sleepwalking. Kritika comes there and watches the entire revelation which shocks her.

Preeta asks Prithvi not to do any acting now, its totally worthless. Shrishti and Rakhi tell him that they know his entire truth, it was their drama to catch him red-handed. He asks them to give him a chance to explain. He tells that he was going to kill Sandeep just for Rishabh’s sake. He acts innocent. He tells that Rishabh is in the jail because of Sandeep, so he thought to kill the witness to call off the case and bring Rishabh home. He tells that he was angry on Sandeep, seeing the family suffering because of him. He adds that he tried to stab Sandeep in anger, because he is frustrated.

Preeta asks him is this his character to kill someone. She asks Shrishti to tell him their entire plan so that Prithvi doesn’t waste his own time. She tells that they had kept an eye on him. She asks him to stop lying and making stories. Prithvi defends himself. He calls himself a son of Luthra family. He tells that he can kill anyone for the sake of the family’s happiness. Preeta calls Sandeep there to testify against Prithvi. Sandeep is in all his senses. Sandeep comes to the fore.

Preeta explains their plan to Prithvi. She tells that it was important for Kritika to see his true face. She adds that she went to call Kritika, but didn’t find her in the room. She met Bani and Kareena, and took their help to save Kritika and Rishabh’s lives. Kareena didn’t believe Preeta at first. Bani gave a chance to Preeta to explain. In the flashback, Preeta tells them that she needs their help in saving Kritika and Rishabh from the evil Prithvi. Bani tells that she is ready to help her. Kareena also agrees.

Preeta asks them to promise her first, and then listen to whatever she has to say. They promise her. Preeta tells Prithvi that she told his truth to Bani and Kareena as well. She had cleared their misunderstandings, and brought the truth out. She tells the family that Rishabh is in the jail because of Prithvi. She adds that Sandeep has told the family how Prithvi had bribed him to lie and frame Rishabh in the case. Prithvi calls it a nonsense. He asks them to believe him, Preeta is just brainwashing them. He tells that whatever he did was just for Rishabh. Rakhi asks him to shut up and stop lying. She slaps him.

She tells that Rishabh is behind the bars just because of him. She counts their favors done towards him. She rebukes him for his evil plans. She asks the reason for his revenge. Prithvi comes to his true avatar and pushes Rakhi away in anger. Preeta defends Rakhi, and scolds Prithvi for ill-treating Rakhi. Prithvi asks Kareena to trust him, he has done everything for Rishabh, Preeta is just blaming him for a motive. He tells that Preeta was mad for him, she couldn’t marry him so she is taking revenge.

Sameer threatens to kill him if he dares speak wrong about Preeta. Prithvi threatens to kill all of them if they dare hurt him. He still denies the blames. Preeta asks Prithvi to admit his crime. She tells that Prithvi had done Sandeep’s accident to stop him from reaching the court. Shrishti tells that Sandeep would have died today if Preeta didn’t make this plan. Mahesh asks them to not waste time and call the police to get Prithvi arrested. Prithvi asks them to believe him. Kareena tells that Preeta asked their help to catch him red-handed, they have a recording to show to the police. Bani tells that the video shows that he is the murderer. Kritika asks Prithvi is this true, did Rishabh get jailed because of him.

He thinks she is the weak link of the family, he has to fool her and then his position in the house will get secured. He wants a chance to speak to Kritika and fool her. He takes Kritika at the knife point. He asks them not to call the police. He takes Kritika with him. He threatens them that he will kill Kritika if they act smart. Prithvi locks Kritika and himself in a room. The family bangs the door. Kritika tells him that he is doing wrong. The family asks him not to harm Kritika.

He tells that Kritika is the shield for him right now. He asks the family to step back. Kritika tells him that she felt he loves her. He fools her stating that he really loves her. Mahesh tells that he didn’t call the police, just to keep Kritika secured. Kareena wants to call the police. Preeta tells that they will first secure Kritika. She takes Kareena’s phone to stop her. She tells that Prithvi is dangerous, he can harm Kritika in anger. Rakhi and Bani ask Kareena to listen to Preeta. Kareena cries for her daughter. They all stand helpless outside the room.

Prithvi justifies himself to Kritika. He tells her that he got her at the knifepoint just to talk to her, because her family isn’t allowing him. He tells that he is helpless to take this step. He asks Kritika to beat him, but believe him. She feels she is mad to love him, when he hates her entire family. She regrets that he is the enemy of her brothers. He controls his anger, just to save himself using Kritika. Stay tuned.

Reviewed Rating for Kundali Bhagya 5th November 2021 Written Update Kritika targeted: 5/5 This rating is solely based on the opinion of the writer. You may post your own take on the show in the comment section below.