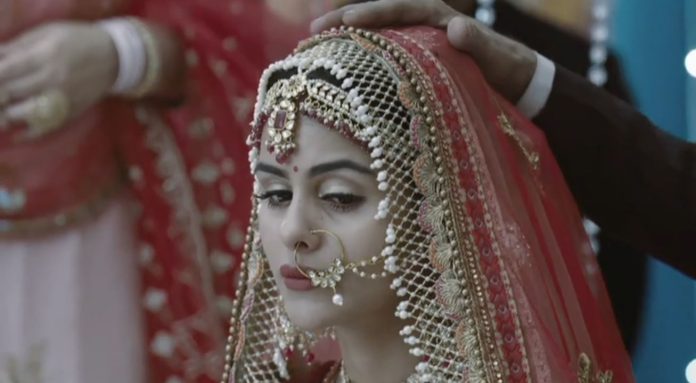 Udaariyaan 5th November 2021 Written Update Tejo’s remarriage Fateh wants Jasmin to never lie to him. His heart wants to believe her, because he loves her, she is the girl he was crazy for since ever and ever. Jasmin fake promises him to fool him that she really loves him. He is blind in his love that he isn’t able to see Jasmin’s truth. Jasmin tells Tejo that she will always make Fateh believe her love. Tejo tells that its just a misconception if one has to prove love again and again, and a misconception can get cleared anytime.

Jasmin asks her not to lecture her. Tejo tells that Fateh got blinded, and lost his mind, his bad time is ahead, his fate will be ruined just because he believed Jasmin. She tells Jasmin that she is cheating someone today, next she will get cheated by someone. She warns Jasmin, and also advises her to reform. Jasmin taunts her that Tejo is still longing for love. She feels she is better that she has her love with her. She asks Tejo to not come in her marriage if she has a bit of esteem in herself. She insults Tejo badly.

Tejo gets enough of Jasmin’s nonsense. Tejo blames Jasmin for snatching her husband. She doesn’t want Jasmin to forget that she has ruined her sister’s happiness. She doesn’t want to stay back in Virk house where she can’t even breathe. The family is in pain seeing Tejo leave. Tejo goes back to Sandhu house. Khushbeer misses Tejo and goes to meet her at Sandhu house. Fateh becomes an unhappy soul after the divorce. He feels he has lost something crucial, like some part of his soul left his body. He meets Angad at the academy.

Angad knows about the divorce completion. Fateh tells Angad that his wishful has happened, but still he isn’t happy. He shares his feelings with Angad. On the other hand, Jasmin goes mad to celebrate her happiness. She invites her friends to the Virk house and parties with them to celebrate Fateh and Tejo’s divorce. She doesn’t take permission from Virks. The family gets tired seeing her shameful acts.

Later, Khushbeer tells Tejo that he would want her to remarry someone, and show to Fateh what’s her actual worth. He wants Fateh to regret and cry for what he lost. He asks Tejo to get married, before Fateh and Jasmin marry. Tejo doesn’t want to compete and prove anything to anyone. Khushbeer decides to get Tejo remarried, and chooses Angad for her. Tejo and Angad’s marriage track will be seen. Do you think Angad is perfect for Tejo? Keep reading.

Tejo bids bye to the Virk family. She gets too emotional meeting everyone. She tells Khushbeer that she can’t lose out her self-esteem to live in the house. She wants to go to her parents’ house and live with pride. She tells that this time she can’t listen to anyone and stay back. She pleads them to permit her to go. Khushbeer doesn’t want her to lower her esteem and live a forced life. He permits her to go with Rupy. He blesses her to stay happy. Tejo asks him to bless Fateh and Jasmin as well. He tells that he doesn’t have a big heart like her, he can never bless Fateh and Jasmin. Tejo hugs the entire family members and then faces Fateh, who sees the family in tears. Tejo leaves the Virk house. Jasmin plans a bachelorette party, when she learns that Virk family elders have gone to the Gurudwara, they will be coming late.

She tells that just Simran and Mahi are at home and she can handle them easily. She plans to rock the party and celebrate since Tejo left from her life. She tells Sweety that even Fateh won’t be coming, he has gone to meet an investor. Fateh is seen having drinks with Angad, and being in sorrow. Fateh has seen Tejo’s tears at the time of leaving. He can’t forget that. He tells Angad that he isn’t happy within. Angad asks him why is he behaving like he had a heartbreak, when he already has Jasmin in his heart. He doesn’t think Tejo and Fateh’s divorce should upset Fateh. Fateh doesn’t know what is happening, since he was waiting for this day since a long time, and when he got divorced now, he isn’t happy at all. He feels the pain of losing Tejo.

Angad finds Fateh regretting that he lost Tejo. He tells that his sorrow of losing Tejo is more than the happiness of getting Jasmin, which means he is really at a loss. Fateh sadly thinks of Tejo. Even Tejo misses Fateh. Angad tells that one values someone after losing. Fateh asks him how does he know the same pain. Angad asks him not to spread his sadness and just enjoy the drinks to forget everything. Fateh wishes to tell Tejo that he is badly missing her. Angad wishes him for his new life. He asks Fateh to invite him in his marriage with Jasmin. Fateh can’t get over the memories of Tejo.

Jasmin parties with her friends and gets more shameless to get into an argument with Mahi. She asks Mahi to learn manners and talk to her well. Simran rebukes Jasmin for showing her true colours. The elders come back home and catch Jasmin partying in the house. Jasmin was giving answers to Mahi and Simran, but gets silent and scared when Khushbeer and Gurpreet scold her. Khushbeer makes the guests leave. He asks Jasmin to never dare do such parties in his house again. Jasmin cries in front of them.

Khushbeer gets angry on Gurpreet who supported Fateh to marry such a wrong girl. Gurpreet tells that she is worried for Fateh, after seeing Jasmin’s true colours. She asks him to think that Fateh is his son as well, Jasmin will be ruining Fateh’s life completely once Fateh marries Jasmin. She tells that she is crying for Fateh, who is going to get ruined. He also gets worried for Fateh’s future. He wants to stop Fateh and Jasmin’s marriage at any cost. Rupy meets Tejo and asks her to share her sorrow with him, and stop acting brave. He gets emotional and asks her to vent out everything contained in her heart.

Tejo cries out her pain, recalling Fateh. She tells him about her bonding with Fateh. She didn’t expect Fateh to cheat her. Rupy asks her to cry and not stop her tears. Khushbeer lands up at her house, and asks her to get married before Fateh and Jasmin get married. He adds that he will not let Fateh marry Jasmin, if Tejo’s marriage doesn’t happen first. Tejo falls in a fix on hearing this. Stay tuned.

Reviewed Rating for Udaariyaan 5th November 2021 Written Update Tejo’s remarriage: 5/5 This rating is solely based on the opinion of the writer. You may post your own take on the show in the comment section below.