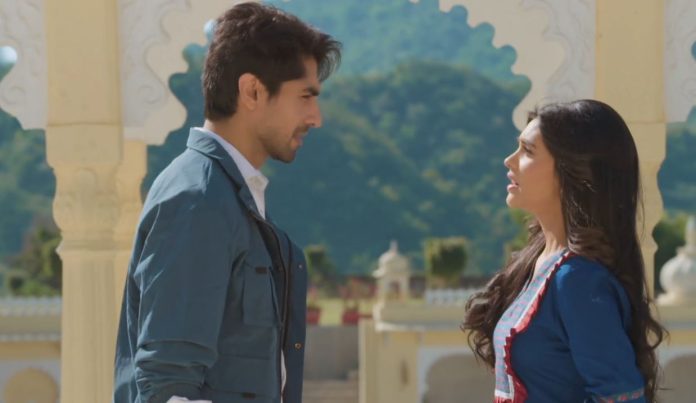 Yeh Rishta 5th November 2021 Written Update Madness begins Abhimanyu wants to tell Manjiri about Akshu. Aarohi gets interested in him. Neil asks Abhimanyu to accompany him for sight seeing. Aarohi tells that she will also come along. Abhimanyu asks her to get the entire group. She replies that just her wish is obeyed in the family. Neil gets emotional that Abhimanyu does a lot for him even when they have no blood relations. Abhimanyu tells that they will always be brothers. Akshu wishes Aarohi understands the relations of heart as well. Manjiri calls Suwarna to know about Aarohi’s visit to the mask festival.

Suwarna tells that Akshu is really there. Manjiri is mistaken about Aarohi, while Suwarna thinks Manjiri is asking about Akshu. Suwarna tells that she is going to the resort and will meet Abhimanyu there. Manjiri asks Suwarna and Dadi to meet him and tell their decision on the alliance. Suwarna tells Dadi that Akshu will get a great guy. Manjiri wants Aarohi to become her Bahu and change Abhi’s life. Akshu changes Abhi’s life by making him smile. Neil is surprised to see Abhimanyu laughing on her joke. Neil thanks her for the big favor.

Aarohi tells her thoughts about love. Abhimanyu doesn’t pay attention to him, because his love is on Akshu. He sides with Akshu and tries to know her thoughts. Akshu tells hat love is like music for her, which enters the heart and wins their over. Abhimanyu likes her simple approach. She tells that she will lose to win someone, that’s victory for her. At Abhimanyu’s house, Manjiri tells the family about Aarohi’s alliance for Abhimanyu. Mahima gets upset that Manjiri decided everything without taking her consent.

Manjiri clears that she didn’t fix anything, they will talk to Goenkas. Mahima gets commanding. She tells that she will speak to the Goenkas from now. She thinks its Akshu’s alliance and decides to call it off. Akshu asks Abhimanyu his thoughts on love. He tells that he believes in love for family, but for any lover, which has no guarantee. He confesses his feelings to her that he wants to experience the mad love. He admits that he is getting drawn to someone, whom he always finds around, someone who has become his weakness and makes his heart beat faster. He tells that he also wants to believe in love and win someone’s love.

Akshu gets confused. He wants to tell her that he loves her. After Akshu leaves, Abhimanyu realizes that his madness is for Akshu. He runs to find himself. He shouts out his love for Akshu. Aarohi and Akshu have the same feelings developing for Abhimanyu. Abhimanyu gets crazy for Akshu. She also starts feeling the same for Abhimanyu. She feels shy to face him. She goes to the group. Suwarna and Dadi happen to come there, and find Akshu with Abhimanyu.

They get glad that fate already united them before their alliance talks. Aarohi vows to win her love Abhimanyu, and spend her entire life with him. Abhimanyu plans to propose Akshu. The group go to the wish lake to make a wish for themselves. Akshu learns that one who wishes for true love really gets such true love in their lives. Akshu wants to wish for Abhimanyu. Aarohi wishes to get Abhimanyu. She tells that she can’t lose out Abhimanyu. Akshu learns about Aarohi’s sadness. Akshu wishes that Aarohi gets whatever she wants, so that the latter’s faith stays intact. Abhimanyu and Akshu spend time together, much to irk Aarohi. Keep reading.

Reviewed Rating for Yeh Rishta 5th November 2021 Written Update Madness begins: 4/5 This rating is solely based on the opinion of the writer. You may post your own take on the show in the comment section below.