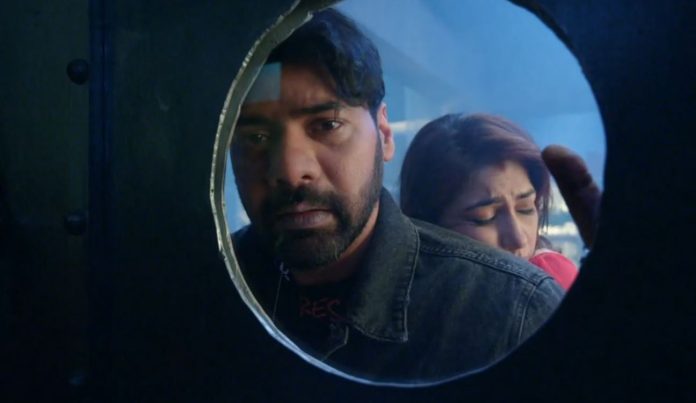 Kumkum Bhagya 7th November 2021 Written Update Abhigya in danger Gaurav tells that Abhi’s death should look accidental. He tells his plan of leaving Abhi in the cold storage, to leave him there to die. Thapar tells that his plan is really good. Gaurav drops Abhi inside the cold storage chamber. He settles scores with him. He doesn’t think anyone will come there to save him, and he won’t get conscious so soon. Thapar reminds Gaurav that even Pragya insulted him, he should take his revenge on her as well. Gaurav recalls the humiliation. Thapar asks him to make a fool-proof plan to kill Pragya as well.

He encourages Gaurav to kill both Abhi and Pragya. Gaurav takes his advice. Sushma plans a grand party for Abhi and Pragya’s wedding anniversary. Gaurav calls Sushma to convey her the message. He tells her that Abhi will be dying in few minutes from now. She is shocked to know this. He asks her not to save time. He tells her that he can kill Abhi right away, but he can get saved if Pragya reaches to save him. He asks Sushma to send Pragya to him. Sushma asks him the address. Gaurav tells her that Abhi is in the hotel’s cold storage.

He threatens her and asks her not to inform the police. She gets stressed. She doesn’t want Abhi to die. She calls the police, but doesn’t say anything. She calls Pragya. She wants to convey his message to Pragya. Pragya looks for Abhi. Sushma leaves for the hotel. She wants to contact Pragya. She calls home. Shagun tells her that Pragya isn’t at home, she left in a rush. Sushma wants to find Pragya. Gaurav tells that Abhi’s blood will be clotting due to cold, he will be soon dying. He asks Thapar if Sushma will tell everything to Pragya. Thapar enjoys the death game. Gaurav wants Pragya to come and see Abhi dying. He tells that it will be the real revenge for them.

Gaurav tells that Pragya will come and try to save Abhi, but its his game, the result will be as he decides. He asks Thapar to enjoy the twists and turns. Pragya finally gets Sushma’s call. Sushma informs her that Gaurav has locked Abhi in the cold storage. She asks Pragya to reach the hotel soon. Pragya tells that she is already in the same hotel. She rushes to the cold storage. Gaurav goes to his room to check the goons. He doesn’t see Pragya. Siddharth is also in the same hotel for a meeting. Siddharth sees Pragya there. He thinks Prachi will be mad happily knowing their company got the project.

Gaurav calls his goons. He asks theme if they got up. Siddharth hears Gaurav’s plan that he will kill Abhi and Pragya together. Gaurav shares his plans with the goons. Siddharth is shell-shocked to know that Gaurav is their enemy. He runs away from there. Gaurav waits for Pragya. He wonders if she didn’t get the news of Abhi dying. He goes back to the cold storage to check Abhi. He doesn’t find Thapar. He looks for Pragya. He asks her not to hide and come out. He finds his dad lying unconscious there. Pragya had attacked Thapar to faint him down. She has rescued Abhi from Gaurav.

Gaurav finds his dad alive. He asks Pragya to dare and face him. Siddharth informs Prachi about Gaurav. She is shocked to know that her parents are in danger. She tells that they have to inform the police, she will be coming there as soon as possible. She runs out of the house. Rhea misunderstands Prachi, and thinks Prachi really has an affair with Siddharth. Pragya attacks Gaurav. She tries to take Abhi on the wheelchair. She waits for the lift. Gaurav falls hurt. He shoots to stop Pragya. He tells that its his game, he will decide who will win. He asks her to apologize to him.

She asks him what will he do if she doesn’t apologize. She tells that she will punish him. He finds her silly to claim that when she is at the gun point. She ask him to surrender to the police. Abhi gets conscious and very much able to fight Gaurav. Abhi tells that they will have a man to man fight and settle scores. He slaps Gaurav first, and then bashes him. Thapar also gets conscious and catches Pragya at the knife point. He threatens to kill Pragya. He asks Abhi to lock himself in the cold storage if he wants to see his wife safe. Abhi agrees to risk his life. Gaurav throws Abhi inside the cold storage and locks him. Abhi shouts for Pragya. He asks Gaurav not to harm Pragya. Pragya takes the knife from Thapar. She tries to get Abhi freed once again.

Gaurav attacks her. He throws her inside the cold storage as well. He locks the door. He leaves them to die. Abhi asks Gaurav not to harm Pragya at least. Prachi is also stuck in the traffic. She pleads to the same constable just like Pragya did. Abhi shouts for help. He asks Pragya why did she come to save her. He scolds her for always risking her life. He finds Pragya unconscious. He tells her that he will not forgive her, she always invites problems and troubles him more.

Pragya gains consciousness when he cries for her. She hugs him and asks him not to scold her. He happily hugs her, finding her safe. He tells her that they will always hug each other. They get into a nok-jhok when they feel better from the injuries. She asks him the last time when they hugged. He reminds the time when he hugged her, but in a dream. She knows that he is a good man.

Gaurav and Thapar leave from the hotel. They don’t want police to know their plan. Gaurav tells that he has a backup plan ready. Thapar feels proud of him. Prachi runs to the hotel in an unwell state. Abhi gets his hand hurt. Pragya cares for his wound. Abhi finds her shivering. He asks her to take his jacket. She asks him to stay safe first, she did everything to get him. He asks her why did she give everything to Gaurav. She tells that he is everything for her, she achieved everything when she got him. She makes him wear the jacket back. Abhi hugs Pragya. He tells her that they will always be together.

They recall their best memories. He stays hopeful that someone will come to save them. Prachi reaches the hotel and looks for Siddharth. She reaches the cold storage. Siddharth gets the medical team for the help. Prachi and Siddharth try hard to open the locked door. They break inside and find Abhi and Pragya lying unconscious. Prachi immediately takes them to the hospital. Gaurav is informed that Abhi and Pragya are rescued and taken to the hospital by some family member. Gaurav tells that he has another plan to get Abhi and Pragya killed in the hospital. He calls the goon and asks him to reach there and kill them. Stay tuned.

Reviewed Rating for Kumkum Bhagya 7th November 2021 Written Update Abhigya in danger: 5/5 This rating is solely based on the opinion of the writer. You may post your own take on the show in the comment section below.