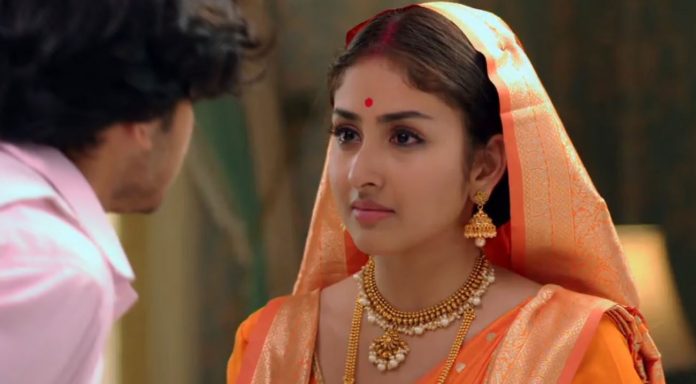 Barrister Babu 9th November 2021 Written update Bondita’s big claim Search for Anirudh Batuk and Trilocahan are listening to Bondita’s speech on women empowerment while Bondita watches them. Batuk stops the radio and narrates what would have happened after that speech. He tells him after that Bondita wins the case of the widowed woman and that woman gets remarried and takes the child with her. Batuk emphasizes this fact in front of Trilochan to provoke him against Bondita. He warns him that this can happen with them too as one day or the other Bondita will get to know about the reality and then she will take the baby with her.

Listening to this, Trilochan gets perplexed and tells that he will not let that happen and Batuk thanks him for understanding him. He then says that he will throw Bondita out of the house once they get the baby of Anirudh. Bondita gets shocked listening to this and cries. On the other hand, Anirudh tries to write a letter to Bondita by stating to her that he is alive and misses her a lot. Bondita cries thinking about him and Anirudh struggles to write the letter. The doctor comes to him and sees the letter. He asks him about Bondita and her address but he fails to remember anything and bursts out in tears. He looks at Durga Maa’s idol and asks for help from her and tells her to send this letter to Bondita anyhow.

Later, Bondita too seeks help from Durga Maa and tells her to give strength to fight the situation. She further says that she cannot let this child separate from her as this baby is her Pati Babu’s sign of love and she will keep the baby with herself so that when he returns she can give this baby to him and will make her family complete. She says that she strongly believes that nothing has happened to her Pati Babu as this relationship is her blessing and she cannot let this relationship fall apart. She refuses to believe that it cannot be possible that her Pati Babu is dead and he is still alive as they are one soul and are not separate.

So, she decides to fight for her husband and her baby and Durga Maa has to help her in uniting her family. Later, Batuk comes to Bondita and she tells him that she has taken her meal and her medicines also. Batuk tells her that he wants to have an important talk with her and states that he is sorry for all his behaviour to date. Bondita thinks that by keeping quiet she will find out the truth about her husband. Bondita forgives him and Batuk pretends to be happy. He then takes Bondita with him for a surprise and takes her to have “Ek badam wala rasgulla”, her favourite sweet. However, Bondita refuses to have the sweet from anyone else’s hand except for her Pati Babu and takes an oath that she will not have rasgulla from today onwards.

Durga Maa gives an indication to which Bondita gets elated and thinks that dirge Maa is telling her that her husband is alive and he will never leave her alone. Bondita further tells that she will soon find her Pati Babu and will have rasgullas from his hand only. She thinks of being with him and her baby happily. On the other hand, the doctor asks Anirudh whether he belongs to Kolkata, Deenpur, Murshidabad, Berhampore, Siliguri, Silchar, Howrah, Krishnanagar or somewhere else. However, he fails to remember and gets anxious. The doctor then asks him not to worry and take a rest.

Anirudh thinks about the terrible condition of his family but could not remember the address of his house. The doctor consoles him and leaves him to take a rest. The next morning, Bondita pretends to be on a phone call and talks about Mallika and pretends to ask where the other person has seen Mallika. She pronounces the location to make Batuk listen to it. Hearing this Batuk leaves from there to find Mallika. Later, Bondita looks in the album for some pictures. On the other hand, a villager tells sorry to Batuk for the inconvenience caused to them due to the faulty telephone line of their house.

Listening to this, Batuk tells him that the phone line is working which the villager refuses by saying that not it is not working and he is going to his house to fix the issue. Later Bondita writes a letter to the family stating that she is going from the house to find her husband and will return as soon as she finds him. When she was about to leave, Batuk comes there and sees her with the luggage. He scolds Bondita and blames her for not thinking about her family and their love, to which Bondita replies that a pure word like “love” does not suit his mouth and calls him by his name. She curses Batuk by calling him darkness in her and her Pati Babu’s life. Batuk closes her mouth and tries to shut her up.

He warns her not to raise her tone while talking with him. Bondita tells him that she hates him, to which Batuk states that he hates her more and they fight with each other. Bondita regrets not recognizing the difference between her Pati Babu and him. Batuk tells her that he is not like him and he hates her as she has betrayed her brother by killing him. Bondita opposes and tells him that he is lying as her Pati Babu is alive. Keep reading.

Reviewed Rating for Barrister Babu 9th November 2021 Written update Bondita’s big claim: 5/5 This rating is solely based on the opinion of the writer. You may post your own take on the show in the comment section below.