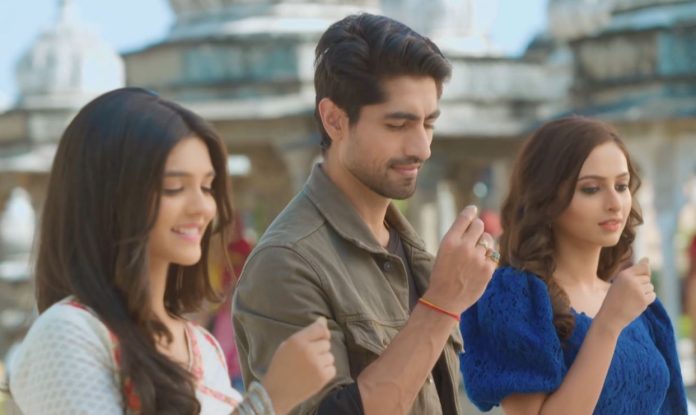 Yeh Rishta 8th November 2021 Written Update Twisted fate Swarna asks the children to throw the coin in the river one by one and make a wish. Abhimanyu throws his coin. Suhanshi (Badi Dadi) asks Kairav to come forward and throw his coin. Kairav throws his coin and wishes God to finish the differences between Akshara and Aarohi. Neil’s coin falls in the river. Suhanshi asks Neil to make a wish as the coin in any way fell in the river. Neil replies that he doesn’t need to wish for anything as he already got such a good family, love from them and a brother like Abhimanyu.

Neil wishes to God that his happiness remains as it is. He takes Abhimanyu forward and asks him to make a wish. Suddenly some announcement is made, Suhasini starts leaving and asks Akshara and Aarohi to make their wish and return to them. Aarohi throws her coin in the river and thinks that before meeting Abhimanyu she never thought that she would ever get to meet someone equal to her. She thinks that she and Abhimanyu deserve each other. She wishes to get Abhimanyu saying that it’s her wish as well as obstinacy.

Abhimanyu throws his coin and thinks he never used to believe in love and now it feels that love is the solution for all his problems. He wishes to get Akshara forever. Next Akshara throws her coin and wishes for the family’s happiness, Aarohi to be no. 1 always and at last she asks God to take care of feelings inside her. Abhimanyu leaves with Neil. Akshara tells Aarohi she is happy that she is returning to her home. Aarohi asks Akshara what she wished for her? Akshara says she prayed for the family’s happiness. She also tells Aarohi that wish should not be revealed as then it doesn’t get fulfilled.

Aarohi says she will reveal her wish. Akshara asks Aarohi not to reveal. Aarohi says she isn’t scared as everything she wished for until now didn’t get fulfilled. She continues saying that Kartik and Sirat left her and even her wish to be away from Akshara didn’t get fulfilled. Aarohi further tells Akshara that if she will not get whatever she wished for today, she will never be able to believe in anything. She tells Akshara that she told her all this because she knows that Akshara can wish anything for her family. Aarohi asks Akshara if she considers her as the part of her family? and leaves. Akshara recalls Aarohi’s words and gets tensed. Akshara again throws a coin and wishes for fulfilling Aarohi’s wish saying she doesn’t want anything for herself. Akshara and Abhimanyu smile and stare at each other while leaving. On the way home, Vansh says their ways are parting. Akshara and Abhimanyu get sad. Abhimanyu stops Goenka’s car and takes blessings from Suhasini by touching her feet. She blesses him and asks him to come to her home some day. Abhimanyu replies he will come soon for sure. Akshara feels shy with Abhimanyu’s stare and Swarna notices it.

Abhimanyu thinks his reason for smiling at his home is Akshara. Mansih asks everyone how their trip was. Everyone says it was very good. They then start drinking colored beverages. Akhilesh says it would obviously have been good as excursing with family feels really good. He then in a teasing way says meeting new people is enjoyable. Akshara recalls meeting and spending time with Abhimanyu. Aarohi too recalls Abhimanyu. Vansh asks the elders if they are hiding something? Suhasini shuts him. Manish asks the children to go and freshen up.

Manish and Akhilesh ask Suhashni was it? Vansh and Kairav from a distance think the elders are discussing something important. Suhashni tells Manish and Akhilesh about Abhimanyu. They praise Abhimanyu’s values and behaviour. They wonder why Manjiri’s (Abhimanyu’s mother) phone is switched off. They wonder if Birla’s doesn’t want to get related to them? Swarna says there must be another reason for Manjiri’s phone coming off and says they will again talk to them and everything will get fine. Goenka elders get excited and happy thinking that soon Abhimanyu will become their son-in-law.

Back at Birla house, Abhimanyu sits with Manjiri in the mandir. He waits for Manjiri to finish her pooja. Manjiri finishes his pooja and thanks God for bringing a love partner in Abhimanyu’s life. Abhimanyu asks Manjiri how she got to know about it. Manjiri replies she can see it on his face. She teases him saying that he is blushing. Abhimanyu gets a little irritated and tells Majari that he wants to share his love with her. He takes Manjiri with him.

On the other hand, Akshara feels happy to be finally living with her family (Goenkas). Akshara sees headphones and recalls Abhimanyu’s words and gets shy. Aarohi too recalls Abhimanyu’s words and decides to intern in Birla institute and make Abhimanyu hers. Akshara thinks Abhimanyu is different from others. She asks Aarohi if they can now live together. Aaroshi agrees to try living with her. Akshara thinks that slowly she will mend her and Aarohi’s relationship. Abhimanyu starts telling Manjiri about Akshara and tells her that she is just like her. Manjiri misunderstands Aarohi to be the girl whom Abhimanyu likes and loves.

In the next episode, Abhimanyu will talk to Akshara on the phone and tell her that she was missing her. Akshara will reply that she is missing him too. Abhimanyu will be seen lost in his love for Akshara. Aarohi( Internship) and Akshara (NGO) will leave for their respective interviews. Akshara will forget her interview and help a fallen child. Mahima will see her and think she wants a wife for Abhimanyu just like Akshara who is similar to Manjiri. Harshvardhan will see Aarohi and think he wants a wife like Aarohi for Abhimanyu just opposite to Manjiri. Aarohi will get angry seeing Abhimanyu and Akshara in each other’s arms at the Birla hospital.

Reviewed Rating for Yeh Rishta 8th November 2021 Written Update Twisted fate: 5/5 This rating is solely based on the opinion of the writer. You may post your own take on the show in the comment section below.