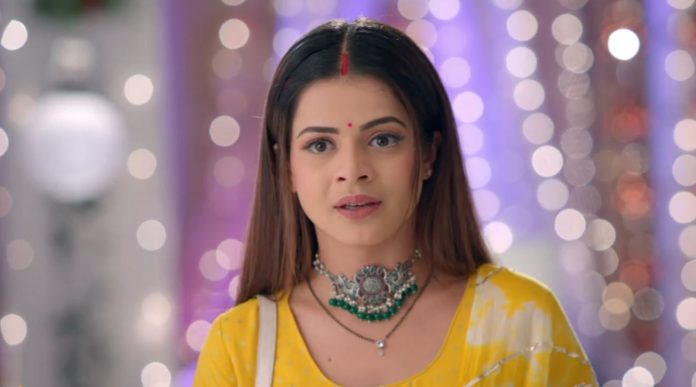 Thapki Pyaar Ki 2 9th November 2021 Written Update Big Trouble Purab blames Thapki for crossing her limits and she apologizes to him. They both dance together and other couples join them on the floor. Purab and Thapki are engrossed in dancing and cannot take their eyes off of one another. Thapki’s outfit gets unzipped while dancing and Purab zips it back, getting her close. Thapki is surprised to see Purab’s behavior towards her but continues dancing. Veena Devi is angry to see Purab and Thapki getting close.

Priyanka tells Sapna to ace up her game and she goes near the guests. She requests them to meet Thapki. The guests are on the way to meet Thapki when Veena Devi sees them going towards her and indicates Thapki to not meet them. Thapki leaves and the guests are not able to meet her. Purab’s friends gather around him and start pulling his legs. Purab is invited to have dinner with them but he refuses as he has some work. Sapna gets an idea to cut the rope so that if the Chandelier falls on Veena Devi then Thapki will come running to save her and everybody will get to know about her stammering.

Priyanka goes to search for Thapki. Purab saves Veena Devi on time as the light is about to fall on her. Priyanka and Sapna once again fall flat on the face. Sapna realizes that she has mistakenly cut Chandelier’s rope and Thapki saves Veena Devi. Sapna and Priyanka are happy to see their plan work. Thapki stammers and the guests make fun of her. Purab takes Thapki’s side and gives it back to the guests. Dadi is happy to see Purab taking a stand for his wife. Veena Devi leaves in anger.

Thapki thinks that whatever she had told Purab was not true and he had not taken her there to irritate her. Purab enters the room and Thapki thanks him for taking a stand for her at the party. Purab is very angry at Thapki and pushes her against the wall. He questions her about calling his friends at the function. Thapki tries to explain to him that it was not her but Purab is in no mood to listen to her. Purab calls Thapki a liar and a storyteller. Purab warns Thapki that she doesn’t have any right to his life. Thapki blames Purab for confusing her as on one side he saves her from Veena’s anger and on the other shouts at her. Purab remembers his promise of always taking care of Thapki.

Purab orders Thapki to not interfere in his life. Purab’s dupatta is under Thapki’s legs and they both fall on the bed. Purab is irritated once again by Thapki but the bed breaks making them fall deeper. Purab and Thapki struggle to come out and push each other. Veena Devi is furious at getting insulted at the party. She tells Dadi and Vinod that she had to struggle a lot to reach this position but her image got spoiled in a few seconds. Dadi explains to Veena Devi that the goddess had some plan in her mind so she must have let Veena Devi meet Thapki and marry Purab.

Veena Devi tells Dadi that Thapki is only a curse for her. Dadi asks Veena Devi to accept Thapki as Purab has changed after she came into his life. Dadi asks Veena Devi to become a good mother as it is her duty to do so. Veena Devi is advised by Dadi to wear her lucky sari for the Laxmi pooja. The next morning Thapki gets a video call from Jaya and she invites her to celebrate Diwali with her maternal family members. Jaya asks Thapki if Purab wished her and she becomes sad. Purab gets up and ignores Thapki.

Thapki sees Purab going away. She changes the topic and wishes her mother Happy Diwali. Jaya asks Thapki to call Purab as she wants to wish him too. Thapki is tensed about telling her mother that Purab doesn’t like celebrating Diwali. Thapki tells Jaya that Purab has gone out for some work. Jaya advises Thapki to be at her in-law’s house for Diwali as it’s her home now.

Simi meets Thapki and asks her if she is tortured in this house. Thapki gets angry at Simi and says that Veena Devi is a loving mother-in-law and leaves. Simi has a recorder installed in her handbag. Simi informs Priyanka that she gave her the wrong information and Thapki is not ready to speak against Veena Devi. Priyanka tells Simi that news needs to be fabricated and asks her to send the video. Priyanka plans to drop a big bomb on Diwali. What is going on in Priyanka’s mind? Will Thapki get trapped in Priyanka’s plan and fall more in Veena Devi’s eyes? Keep reading.

Reviewed Rating for Thapki Pyaar Ki 2 9th November 2021 Written Update Big Trouble: 5/5 This rating is solely based on the opinion of the writer. You may post your own take on the show in the comment section below.