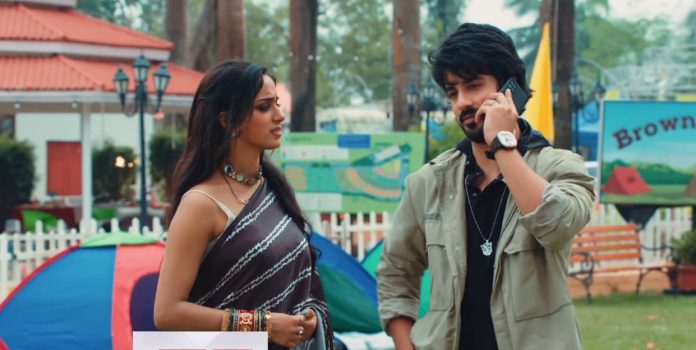 Yeh Hai Chahatein 9th November 2021 Written Update Surprise Prisha returns to Khurana mansion and searches for Rudra. She finds him crying in a room with Saaransh’s photograph. Rudra replies that he is missing Saaransh a lot. Prisha laughs at Rudra’s crying baby behavior. She explains to Rudra that he is behaving childish as Saaransh will return in just two days. Rudra questions Prisha why she isn’t crying even being Saaransh’s mother. Prisha replies to Rudra that she isn’t crying because she wants to spend time with him alone. She explains that no one will disturb their romance now.

Rudra praises Prisha’s thoughts and pulls her to bed. He makes Prisha lay under him. They recall their old romantic moments. Before they could get intimate successfully a phone call from Saaransh disturbs him. Saaransh pretends to be unwell and sneezes badly on the call, making Rudra worried. Rudra says he is coming to get him with Prisha. He says to Prisha that he told her it’s not good to send Saaransh in camp. Prisha asks Rudra how Saaransh got unwell..Rudra tells Prisha that they are leaving to meet Saaransh in camp right now.

Prisha gets upset. Rudra asks Prisha the reason behind her getting upset. He asks if GPS and Vasudha are fine? Prisha says to Rudra that she wants to talk to him about GPS and Vasudha. Late at night GPS gets someone’s call and gets worried. He checks on asleep Vasudha. GPS receives the call and says he will come soon. Without making a noise GPS gets up from the bed. Prisha tells Rudra that she feels that GPS is hiding something from her and Vasudha. Rudra asks Prisha, what is GPS hiding? Prisha tells Rudra that first she saw GPS purchasing a saree which they failed to find in the Srinivasan house. Secondly, she and Vasudha didn’t find GPS in Subu’s house which he informed and then GPS was stuttering and lied when she confronted him.

Rudra says he can’t believe that GPS will be doing something wrong. Prisha tells Rudra that GPS gave vague reasons for drinking when she confronted him. She says to Rudra that even she can’t understand why GPS will lie to them. Rudra tells Prisha that GPS may have some big reason for lying. He further tells Prisha that in his opinion GPS would never hurt her, family and Vasudha. On the other hand, GPS is seen heading out of the house secretly. Vasudha wakes up and doubts GPS of having an affair. Rudra and Prisha reach Saaransh’s camp and find him. He asks Saaransh if he is unwell. Saaransh says he is absolutely fine.

Prisha explains to Saaransh that Rudra got so worried for him. Rudra also explains to Saaransh that he should always speak the truth. Saaransh’s camp instructors tell Prisha and Rudra that they arranged a room for them in advance as Saaransh told them about their arrival. They tell Prisha and Rudra that they can keep Saaransh with them too. Prisha tells the instructors that Saaransh will live in the tent given to him. Elders send kids to their tents. On the other side, a worried GPS leaves for Laxmi Nagar in a cab. Vasudha follows GPS in an auto.

Rudra and Prisha praise the camp location and organisations. He asks Prisha to take it as a hint of God and spend intimate and romantic time with him. Saaransh disturbs them again. He makes them meet his best friend Vidhi. They call Vidhi and Saaransh brave and cute. The instructors ask the kids to return to their tents. Rudra asks Vidhi if she is Param Aneja’s relative. Vidhi replies that Param is her paternal uncle. Rudra reveals that he is working with Param. He says good night to Vidhi. Vasudha sees GPS visiting some strange women. Many questions get raised in her mind.

Vasudha gets shocked to see GPS hugging the strange woman. She gets more worried when GPS enters the woman’s house. She rings the woman’s house doorbell. GPS gets shocked seeing Vasudha at the door. Vasudha gets angry at GPS and asks if he thought that she would not find out about his deceit? Vasudha enters the house and GPS tries to stop her. She shouts and asks the strange woman to come out. The woman comes and calls GPS as Krishnan. She asks what happened. Angry Vasudha asks GPS if the strange woman calls him Krishnan?

The strange woman asks Vasudha why she is creating drama in her house. Vasudha replies that she is GPS’s wife and has been living with since 30 years. She asks the strange woman why is she questioning her and keeping an illegitimate relationship with GPS? The strange woman replies that Krishnan (GPS) and she love each other and didn’t commit any sin. She tells Vasudha that now she understood why GPS came to her on his own will. Both Vasudha and the strange woman get into a war of words for GPS. Vasudha stabs the woman and gets shocked.

In the next episode, Vidhi will fall down while playing with Saaransh. Rudra and Prisha will run to her and ask if she wants them to call Param. Vidhi gets scared and refuses to call Param. On the other side Param will be seen with Mishka. He will receive a call from Rudra, who will call him to the kids camp to surprise him. GPS will be seen telling Vasudha that he went to meet a friend who suffered a heart attack. Param and Mishka will reach the camp. Rudra and Prisha will make a scared Vidhi meet Param. Param will get angry and tell Rudra that he doesn’t want to see Vidhi’s face. This will shock Rudra and Prisha. Vasudha will see a bank message on GPS’s phone revealing that GPS gave some money to Radha Murthy. She will try to find out why GPS is giving money to Radha Murthy.

Reviewed Rating for Yeh Hai Chahatein 9th November 2021 Written Update New Surprise: 5/5 This rating is solely based on the opinion of the writer. You may post your own take on the show in the comment section below.