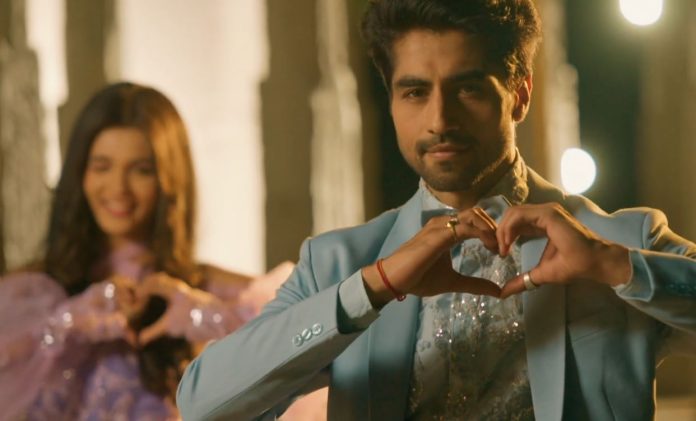 Abhimanyu misunderstands Neil and asks him to give the number if he has it. Abhimanyu remembers the number that Neil gives him. Aarohi puts her phone on Akshara’s charger. Abhimanyu sees that no display pic is on the number given by Neil. He thinks of it as another similarity between him and Akshara. He messages on the number saying that the trip was good. When he doesn’t get any reply. He again sends a message asking if he can call if she is free. Akshara gets disturbed but again continues playing her guitar.

This time, Abhimanyu calls on the number and Aarohi picks it up. Abhimanyu introduces himself. He thinks Neil gave him Aarohi’s number instead of Akshara’s. Aarohi on the other side asks Abhimanyu if he can hear her? Without any interest Abhimanyu talks to Aarohi and asks her to ignore the messages he sent. Aarohi reads them and says she will ignore them. She asks Abhimanyu how is he? Abhimanyu replies he is fine. Aarohi asks him his reason behind calling her. Abhimanyu replies that he thought of making a group to share trip pictures. Aarohi asks him not to worry as she will create the group. He asks her to add everyone.

Both of them disconnect the call. Aarohi thinks Abhimanyu likes him as he searched her number and called her. Anand and Mahima in the meeting room discuss hospital things. Harshvardhan gets a message from Manjari saying that Abhimanyu likes Aarohim. In the same message Manjari asks Harshvardhan to talk about it once. Harshvardhan replies he will see. Abhimanyu is seen waiting for Aarohi to create a group, so that he can get Akshara’s mobile number. Harshvardhan says he will interview interns. Mahima thinks now she can interview Akshara. Abhimanyu gets excited seeing that Aarohi created a group. He immediately controls his excitement seeing his father. Abhimanyu leaves the room excusing himself.

Harshvardhan thinks Abhimanyu is talking excitedly with Aarohi. Goenka elders worry about getting Manjari’s number again switched off. Suhasini asks Manish to find out Harshvardhan’s number so that she will directly talk to him. Swarna stops Manish and explains that they should not show Birla’s that they are in a hurry to get related to them. Elders agree to Swarna. They get happy thinking that Akshara and Aarohi are already meeting Birlas which is a hood sign. Akshara receives a call from Abhimanyu and the latter gets mesmerised hearing the former’s voice. Abhimanyu introduces him. Akshara too feels the same as Abhimanyu. They tell each other that they are missing their previous trip together.

Akshara gets more shy and curious. Aarohi is seen walking in the corridor. Abhimanyu asks Akshara to say something. Aarohi reaches Akshara’s room and Akshara disconnects Abhimanyu’s call saying she is feeling sleepy. All three, Akshara, Aarohi and Abhimanyu dream about each other. They are seen dancing on ‘Ishq wala love’ in their respective dreams. Next morning, Neil reveals to Abhimanyu that his x-ray came very different from every time. Abhimanyu checks his x-ray and finds A written in it. Neil tells Abhimanyu that someone whose name starts with A is seen written in his heart. Abhimanyu in his thoughts agrees with Neil.

Abhimanyu decides to confess his love to Aarohi. Akshara and Aarohi are seen getting ready for their respective interviews. Aarohi thinks she will intern in Birla hospital only. She also thinks she will get what she needs anyhow. Akshara thinks about why Mahima called her again. Akshara wishes Aarohi all the best. Aarohi tells Akshara that she is already best and instead Akshara needs to be best.

In the next episode, Akshara and Aarohi will meet Abhimanyu at Birla hospital. Abhimanyu reminds them that their Badi Dadi (Suhasini) invited him to their home. Aarohi, being curious, will ask Abhimanyu to come soon to Goenka house as everybody is waiting for him. On the other hand, Manjari will reveal that she wants an equivalent doctor wife for Abhimanyu. This will shock Mahima.

Abhimanyu will show Akshara’s picture on his mobile’s home screen to Mahima. Mahima will call Akshara very beautiful, making Abhimanyu happy. Akshara will fall in Abhimanyu’s arms somewhere outdoors. Abhimanyu will ask Goenkas their daughter’s hand for marriage. Kairav will ask Abhimanyu whom he wants to marry, Akshara or Aarohi? Everyone waits for Abhimanyu’s answer. Will Abhimanyu end the misunderstanding by naming Akshara? Keep reading.

Reviewed Rating for Yeh Rishta 9th November 2021 Written Update Cross proposal: 5/5 This rating is solely based on the opinion of the writer. You may post your own take on the show in the comment section below.