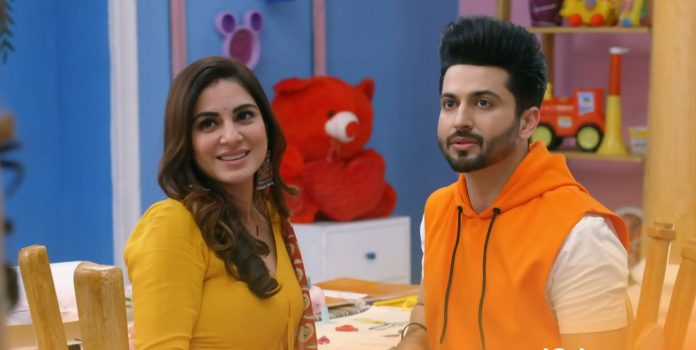 Kundali Bhagya 10th November 2021 Written Update Separation hint Sameer and Shrishti see Sherlyn going somewhere. They hear her asking someone for an address. Sameer tells that he is sure that its Sherlyn in the car. He calls Rishabh to inform about Sherlyn. He tells Rishabh that he has just seen Sherlyn at the signal. Rishabh realizes that Sherlyn cleanly lied to him once again. He is shocked to catch her another lie. Meanwhile, Karan tells Preeta that it will be really tough for him to live without her. She replies that she doesn’t want such circumstances to come that he gets compelled to live without her.

They have a romantic hug. Sonakshi keeps an eye on them. She deliberately goes inside to break their hug. Karan asks Sonakshi if she wants anything. Sonakshi uses Pihu as any excuse. She lies to them. Sonakshi wants to take Preeta’s place in Karan’s life. She has stolen Karan’s gifted dress for Preeta with an evil plan to create misunderstandings between them. What will be Sonakshi doing against Preeta? Why did Karan and Preeta’s scene hint their upcoming separation? Is the separation on cards once again? Keep reading.

Earlier in the show, Karan gifts a dress to Preeta. He asks her to wear the dress on Diwali eve. She asks him not to waste money, she already has many new dresses. He tells that she is his wife, she deserves the best things. He kisses her to get a return gift from her. Sonakshi keeps an eye on them. Pihu comes to seek their help for painting. Sonakshi checks the dress. Shrishti comes back to wish everyone Happy Diwali.

Sameer and Shrishti have a fight. Rishabh asks them to stop fighting. He asks Shrishti to handle Sameer. She asks Sameer not to try to talk to her. They go to buy the crackles. Kareena tells that she doesn’t like Shrishti, she doesn’t know how to talk to a guy, belonging to Luthra family. Rakhi tells that Shrishti is kid at heart. Rishabh knows that Kareena loves them and she is protective. He promises that they all won’t do anything to upset them. He asks her to forgive them. She hugs him. She tells that she is glad that he agreed with her. He convinces her every time by his sweetness.

Rishabh looks for his laptop charger. He thinks to ask Sherlyn. He doesn’t see Sherlyn in the room. He thinks if she went to meet Prithvi in the jail, then he will not spare her. Sameer asks Shrishti to forget whatever he told. She tells that their friendship is over. Sameer asks her will she end their friendship for a kiddish fight. He apologizes to her. She tells that she doesn’t like to forgive, but punish. He accepts her punishment. She asks him to tell the family that she isn’t scared of crackers, but he is the one who is scared of it. He tells that it will look funny if he tells so. She tells that now they aren’t friends. He stops the car at the signal. She asks if he wants her to get down the car. He thinks its tough to handle her attitude. He asks her to see Sherlyn in the car. She tells that Sherlyn is at home.

She asks him not to miss the signal while staring the girls. He tells that he is sure that he has seen Sherlyn. Meanwhile, Preeta and Karan spend time with Pihu. They have a moment of love. Karan falls for her once again. He thinks of their memories. They help Pihu in her drawing. Karan wants to talk to Preeta. She tells that she will come later. Pihu shuts the door and asks Preeta not to go anywhere, because Karan wants to spend time with Preeta. Karan calls Pihu the best. Preeta shows the clothes she got for Pihu. He likes it.

Sameer and Shrishti buy the crackers and diyas. She asks him what else did Rishabh ask them to buy. They get into a fight again. He asks her to behave well with him. She asks him to carry all the bags himself. He asks her to help him. Sameer calls Rishabh to ask him what did he ask them to bring. Shrishti asks Rishabh to ask Sherlyn. Rishabh tells that Sherlyn isn’t at home. Sameer tells him that he had seen Sherlyn at the signal. Shrishti asks Sameer to tell everything to Rishabh. She apologizes that she didn’t believe Sameer. Sameer tells Rishabh that he has really seen her.

Rishabh asks them to come home. Shrishti asks Sameer if he is thinking the same. Rishabh doesn’t understand why Sherlyn lies to him all the time. Sherlyn meets Prithvi in the jail. He was also dying to see her. She tells that he should have called her before to meet. He tells that he is failing in everything these days. She tells him that she will bail him out. He wishes that he took her advice. She asks him to be strong, and not accept defeat. She motivates him. He calls her the best, after Preeta and Kritika proved out to be his mistakes. He tells that he hates Preeta a lot, he wants revenge on her. She is glad to see the old Prithvi back. They share a moment.

Sonakshi gets angry on her. She enters the room. Pihu tells Karan that she stopped Sonakshi, but the latter didn’t listen. Karan asks Sonakshi why did she come. Sonakshi tells that she thought Pihu is joking. Pihu asks for a new sister. Karan tells that the dress is for Pihu. Pihu asks Preeta to make her try the dress. Sonakshi leaves. Preeta takes Pihu to make her ready. Rishabh recalls Sherlyn’s lies. He gets frustrated. He wants to see Sherlyn and Prithvi’s relation. He hates her that she is keeping his relation with Prithvi, knowing he did so much wrong with the Luthras. He prays to get courage to control his temper if he spots them together. Keep reading.

Reviewed Rating for Kundali Bhagya 10th November 2021 Written Update Separation hint: 5/5 This rating is solely based on the opinion of the writer. You may post your own take on the show in the comment section below.