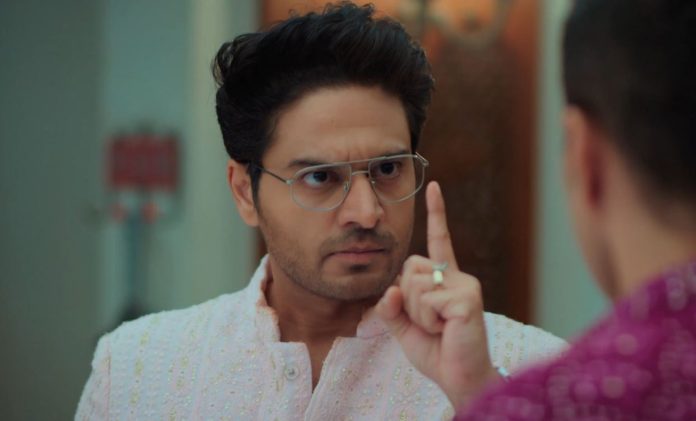 Anupama 10th November 2021 Written Update Anuj outburst Anuj says he did love Anupama twenty six years ago and at present too. This shocks Anupama and Baa. Anuj says till he is alive he will continue loving Anupama. Whole shah family can be seen in shock. Anuj further says that he is sad that the whole truth is different. He tells that the whole truth is that Anupama doesn’t love him. Anuj says that never loved him, loves him or will ever love him. He also says that he has one sided love for Anupama as the latter will never love him. Anuj reveals that he can even die for Anupama but Anupama’s everything is shahs. He says that Anupama is his friend only.

Anuj further asks Shahs to understand that only they matter for Anupama. He tells Shahs that their words prick Anupama’s heart. Anuj requests them to leave Anupama and punish him instead. He again repeats that Anupama never loved him and for once he can be wrong but Anupama can never be wrong. Anuj continues telling that Anupama’s mistakes are that she gets hurt herself to make Shahs happy. Another big mistake of Anupmama is that by her hard work she grew professionally above her ex-husband (Vanraj) which Shahs can’t tolerate. Anuj tells Shahs that getting jealous from Anupama’s professional growth, they tried breaking her strength and when they failed they are now trying to defame her.

Anuj asks why in this world a woman has to hide her good works also and a man can commit and accept his sins with no guilt. He asks Shahs if they deserve the love and respect Anupama gave them in years. Anuj asks Vanraj, was he worthy of the place Anupama gave him in her life? He also asks Baa if she was worthy of being Anupama’s godly figure? Anuj also asks Paritosh, was he worthy of Anupama’s love and sacrifices? He further says that no one is or was worthy of Anupama. Anuj says that he not only loves Anupama but worships her.

He asks Shahs, if he, Bapuji, Nandini, Kinjal and Samar could see a goddess in Anupama then why can’t Baa, Paritosh, Vanraj and Kavya see that? He says to Shahs, they should worship a woman like Anupama but instead they talk ill about her. Anuj says he became a better person even being in one sided love with Anupama but Shahs remained cruel even after getting Anupama’s love. He tells Vanraj that he learnt a lot even by losing Anupama but Vanraj didn’t learn anything by even winning Anupama.

Anuj calls Vanraj an unlucky person. For the last time he tells Shahs that he has Anupama in his heart but Anupama has place for only Shahs in her heart. He warns Shahs to understand their mistakes and stop insulting Anupama again and again. He tells Shahs that their happiness will get ruined if they continue their sins. Shocked Anupama turns to leave but sees Samar who heard every word of Anuj just like her. She leaves and Samar follows her. Vanraj asks Anuj to get out. Anuj gets angry and says he will stand for his love. He warns Vanrah that his passion will break his adamance (obstinacy). Vanraj challenges Anuj to face him to see who breaks. Anuj says he is with Anupama now and will see who hurts her.

Vanraj again asks Anuj to get out. Anuj leaves from there warning Vanraj. Anupama keeps walking towards her home in shock and Samar follows her. Anuj sits in his car and realizes that he increased Anupama’s troubles by confessing his love for Anupama in front of Shahs. He thinks about what will happen if Anupama learns about his love for her. Vanraj recalls Devika taking Anupama to meet Anuj. He recalls Anuj and Anupama taking stands for each other. He thinks why Anuj’s love confession is pricking or affecting him?

Anuj decides to confess everything to Anupmama and apologize to her. At Shah house Kavya tries to instigate Vanraj against Anupama and Anuj. She calls Anuj stupid for falling for a woman like Anupama who is middle aged, mother to three children, mother-in-law of two girls and divorced. She further says what Anuj saw in Anupama as she isn’t beautiful and slim like her. Vanraj asks Kavya if she can handle the cafe for two days with Mamaji. He gives the reason that he has to meet an investor in Surat for cafe expansion. Kavya asks him to not go during Diwali time. Vanraj asks Kavya to pack his things and leave.

Kavya thinks she will handle everything behind Vanraj. On the other hand, Samar asks Anupama what is wrong if Anuj loves her? Samar makes Anupama recall her words she used to say that love is bigger than worship. He asks her how can loving someone be wrong? Samar tries explaining to Anupama but she gets a little angry recalling her stands for Anuj’s friendship and the latter’s love confession. Anupama asks Samar to leave her alone for sometime. Samar hugs Anupama tightly and doesn’t leave her on her requests. Anupama breaks down and Samar thinks now Anupama will be able to understand his point of view.

On the other side, Anuj walks, recalling Anupama taking a stand for him. He sees teenagers fighting with each other. Anuj gets involved in their fight to get himself punished. The teenagers run away seeing Anuj provoking them to beat him. Anuj lays on the road and feels that because of him Anupama is suffering. He recalls Anupama taking care of him and beautiful moments with her. Anuj can be seen breaking down emotionally. On the other hand Samar tries calming Anupama. Anuj imagines Anupama on the road and keeps walking. GK gets tensed seeing Anuj’s condition when the latter reach home.

Anuj cries a lot and GK hugs him trying to calm him. On the other side, Anupama refuses to hear Samar’s explanation. Samar tells Anupama nothing will get solved if they don’t talk to each other. In the next episode, Samar will explain to Anupama that Anuj loves her passionately even more than she ever loved Vanraj. Anuj will tell GK that he is so unfortunate that he lost Anupama without even getting her. Baa will say that Anuj and Anupama will have to bear for they did. Kavya will smirk hearing Baa. Samar will tell Anupama that he understood that a relationship is based on MaAn (respect). He will further tell Anupama that it’s time to see if she could keep respect for Anuj’s goodness, honesty and their friendship or not. What will be Anupama’s decision? Keep reading.

Reviewed Rating for Anupama 10th November 2021 Written Update Anuj outburst: 5/5 This rating is solely based on the opinion of the writer. You may post your own take on the show in the comment section below.