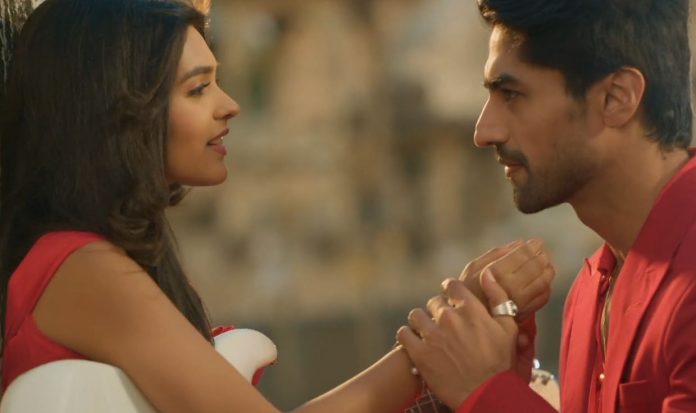 Yeh Rishta Upcoming Engagement twist 10th November 2021 Written Update Mahima is seen browsing Akshara’s social media profile while Harshvardhan is seen browsing Aarohi’s social media profile. Mahima asks Manjiri to bring tea as she is getting late for work. Manjiri comes there with tea and tells that she gave leave to house staff as its Dhanteras. She serves the tea to both Harshvardhan and Mahima. Mahima feels irritated when Manjiri says she gave leave to staff so that they can enjoy Dhanteras with their families. She asks Manjiri why she is an emotional fool? She continues taunting Manjiri that she cares about the staff but not her time. Mahima tells Manjiri that it’s good that she got married in the same house as her sister’s, otherwise she would have found it difficult to live with other people.

Manjiri says it’s good that she saved her making her sister in law. Harshvardhan taunts Manjiri for doing household work with staff and compares her to Mahima who works as a doctor. Manjiri replies that it’s good that one sister handles home and the other sister works outside. Mahima agrees to Manjiri saying that home is her (Manjiri) world and world is her (Mahima) home. She thinks Akshara is almost like Manjiri and can handle home. Harshvardhan on the other hand thinks he needs to see that Aarohi is not like Manjiri as he doesn’t want a wife like Manjiri for Abhimanyu.

Aarohi and Akshara reach their venue for their respective interviews. Mahima’s staff tells Akshara that Mahima has only 10 minutes to talk to her. Akshara stops and sees a child fallen from a bicycle. On the other side, Aarohi hears a Birla hospital staff member asking the receptionist that two doctors are needed. One doctor is needed to check MLA’s BP and another to give glucose to a rickshaw driver. Receptionist informs the staff that Aarohi came for an intern’s interview. Akshara runs towards the child, Mahima’s staff asks her to leave the child and go for her interview. Akshara replies that the child is more important for her than the interview.

Mahima’s staff asks Akshara to think about her career first. Akshara says that she first needs to become a good person. She helps the child and Mahima watches her from far away. On the other hand, Aarohi chooses to check MLA’s bp over giving glucose to a rickshaw driver. Harshvardhan sees Aarohi from far away. Mahima passes Akshara seeing her leaving her interview for a wounded child. Harshvardhan passes Aarohi for choosing rich over poor. Mahima thinks Akshara is the girl she wanted for Abhimanyu, who is just like Manjiri, who thinks about others before herself. Harshvardhan thinks Aarohi can be a perfect wife for Abhimanyu who is opposite to Manjiri and wants to grow herself professionally.

Abhimanyu thinks to call Akshara. At the same time Akshara collides with Abhimanyu and falls in his arms. They get lost in each other. Akshara tells Abhimanyu that the child got wounded. Abhimanyu picks the child and takes him for first aid. Harshvardhan tells Aarohi that she got selected to intern at Birla hospital. He tells her that she has all the qualities to become a doctor at Birla hospital. Harshvardhan praises Aarohi and asks her to work hard. He also tells Aarohi to remember that a good hospital can’t be built with just good doctors. Aarohi completes Harshvardhan’s sentence and says that a hospital is built with good doctors as well as money and rich clients.

On the other hand, Harshvardhan welcomes Aarohi to the Birla family. Aarohi smiles and shakes hands with Harshvardhan. She tells Harshvardhan that she always aimed to be no. 1 in her life for which she can do anything. Aarohi promises Harshvardhan that she will work hard to maintain his hospital’s top rank. Harshvardhan tells Aarohi that he likes her thinking and attitude. He puts Aarohi in Abhimanyu’s team. Harshvardhan asks Aarohi to wait for her documentation to get completed. Aarohi gets angry seeing Akshara and Abhimanyu in the same cabin. Akshara gets surprised seeing Aarohi and tells her that she missed her interview in bringing the wounded child to the hospital.

Abhimanyu asks Akshara that she left her interview to help a child in need. Akshara replies yes and says that maybe that job was not for her which is why god didn’t let her reach for the interview. She asks Aarohi how her interview went. Before Aarohi can reply, Abhimanyu says she must have got selected as he knows Aarohi from some time. He also says that he has known the selection people since his childhood. Aarohi tells Akshara she really got selected. Akshara hugs Aarohi and jumps with joy. She says the whole family will be happy and Suhasni will make her eat Halwa. Abhimanyu asks Akshara will she make Aarohi eat halwa or methi dana.

Abhimanyu says he will visit soon and leaves. On the other side, Kairav gets upset with Goenka elders for arranging Akshara’s alliance without asking her. They get into a war of words over it. Aarohi and Akshara reach home and ask them what happened? Swarna tells Akshara that a good marriage alliance came for her. Manish says to Akshara that alliance only came but they will take her consent before proceeding. Kairav again starts arguing with Manish. Akshara requests them to stop fighting. Aarohi feels jealous seeing elders giving attention to Akshara. Akshara reveals that Aarohi got selected in Birla hospital. Everyone gets happy and praises Aarohi. Swarana and Suhasni discuss that Akshara will become Birla’s daughter in law and Aarohi will work in Birla hospital.

At Birla house, Manjiri finds Parth and Shefali fighting with each other. She stops them from fighting. Shefali asks Manjiri to explain to Parth that she has a lot of work being a journalist. Parth says that because of her work their relationship is getting ruined. Shefali taunts Parth saying he doesn’t understand the importance of work as he never went to hospital to work. She taunts Parth that he can’t understand her dreams. Manjiri asks Mahima to explain something to Parth and Shefali. She further says that she understood that marriages between people working at an equal level face less difficulty. Mahima gets shocked and confused to know that Manjiri wants a doctor wife for Abhimanyu who is equal to him. Before Mahima could ask something else from Manjiri, the latter gets busy.

Goenkas and Birlas perform Dhanteras puja in their respective homes. Abhimanyu wishes luck to Shefali for her sting operation. Mahima allows Shefali to go for her work saying work comes before everything. Abhimanyu distributes shagun in house staff. Before Harshvardhan could tell his choice of girl for Abhimanyu’s marriage, the latter says he already chose a girl for himself. He says he will first talk to that girl and know her consent. He asks everyone to wait for his reply as he wants to make decisions of his life on his own.

In the next episode, Akshara and Aarohi will get ready in beautiful lehengas. Aarohi will forward her hand towards Abhimanyu to let him make her wear the engagement ring. Abhimanyu will reveal that he loves Akshara not Aarohi. This will shock Goenkas as well as Birlas.

Reviewed Rating for Yeh Rishta Upcoming Engagement twist 10th November 2021 Written Update: 3/5 This rating is solely based on the opinion of the writer. You may post your own take on the show in the comment section below.