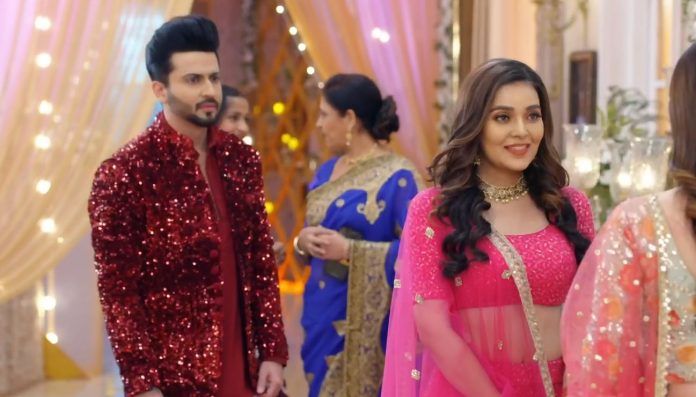 Kundali Bhagya 12th November 2021 Written Update Cunning Sona Sonakshi comes to ask Preeta about her dress. Preeta tells that the dress looks lovely, and its suiting Sonakshi a lot. She compliments Sonakshi on her looks. Karan finds Preeta wearing another dress. Preeta tells that the dress looks like its made for Sonakshi. Sonakshi thanks her for gifting the dress to her. Preeta is clueless of it, and wonders why is Sonakshi saying so. Karan overhears them. He misunderstands Preeta for gifting the dress to Sonakshi against his wish. He gets upset. Sonakshi tries to create a rift between them.

Earlier in the show, Kritika gets dressed for the function. She recalls Prithvi and stops applying the sindoor. She hates Prithvi. Karan thinks Sonakshi is Preeta, and goes to hug her. He romances her. Sonakshi gets smiling. She wishes to turn into Mrs. Luthra. He feels her touch different and makes her away. He sees Sonakshi smiling and gets puzzled by her behavior. She goes to thank Preeta for the dress, and cunningly acts to receive compliments from Preeta on the dress. Karan misunderstands Preeta, that she gave the dress to Sonakshi.

Karan makes Sonakshi away. She taunts him that he loves Preeta so much, but doesn’t know it by touch. He tells that he didn’t feel anything, he just saw the dress and thought its Preeta. She tells that this lovely dress is gifted by someone. She adds that she will tell Preeta that he hugged her. Karan asks her not to drag the matter, he hugged her by mistake. She tells that Preeta is like her sister. He tells her that Preeta does the puja work, so he thought Preeta is at the temple. Sonakshi tells that she has no problem. He feels sorry. She isn’t feeling sorry, she is happy that Karan hugged her. She wants Karan to come more close to her.

Karan finds Preeta wearing some other dress. He wonders why did she wear the other dress when he gifted her a special dress. Preeta thinks she has worn his gifted dress, but he still looks upset. Sonakshi doesn’t want Karan to get sad. She wants Karan to love her. She goes to further create a misunderstanding. She remembers that Preeta is wearing a dress of the colour Karan dislikes. Karan wants to ask Preeta why did she wear the other dress when she knows he dislikes its colour.

Preeta wants to speak to Karan. She compliments Sonakshi’s dress. Karan thinks Preeta is insulting his gift. Rishabh wishes happy Diwali to Karan and hugs him. Sonakshi makes Karan hear that Preeta gifted her the dress. Karan gets confused. He goes away. Preeta tells that she didn’t gift her the dress. Sonakshi tells that she was confused. The family spends time with Pihu. Kritika is upset, but gets a smile because of Pihu.

Preeta asks Kritika not to stay upset. Kritika blames herself for marrying Prithvi and bringing him home. Preeta tells that its not her mistake. She gives hope that things will get fine. Rishabh tells that he has failed to explain her that Prithvi is a wrong guy. Karan reminds that Kritika threatened of a suicide and didn’t listen to them. Kritika apologizes to them. Preeta asks them to not talk sad things. Shrishti joins the Luthras’ for the aarti. All the couples perform the aarti.

Preeta stops Sonakshi from performing the aarti, stating that just the couples perform the aarti. Sonakshi feels humiliated. She swears to take revenge on Preeta by replacing her in the Luthra family. She wants to make Preeta’s life a hell. Rakhi asks Sherlyn and Preeta to light the diyas. Shrishti and Sameer take Pihu with them. Pihu asks them if she will be punished if she doesn’t know to sing aarti. They tell Pihu that she will never get punished, she is innocent. Sonakshi keeps an eye on them. Pihu prays that she gets a cute little sister. Shrishti hopes for a miracle to happen.

Pihu asks them to go out, until she changes her clothes. Shrishti and Sameer leave. Sonakshi wants to ruin their Diwali. She wants to destroy Preeta’s happiness. Preeta lights the diyas with a prayer that every darkness ends. Karan meets Preeta, and gets into a sweet moment. She asks him the reason for his upset face. He tells that he needs time to get normal. She wants to know what’s bothering him. He asks her to forget it. She asks him how is she looking. He tells that she looks the prettiest always. Their conversation gets continued. The dress confusion goes on. Sonakshi meets Pihu. She tells Pihu that Preeta likes her dress. Pihu tells that Rakhi asked her to change the dress.

Sonakshi asks her to light the fire crackers, wearing the same dress. She asks Pihu to promise that she won’t reveal her name. Pihu promises her. She goes to burn some crackers. Mahesh is happy to be with his sons. He tells that he has many emotions connected with his sons. Bani calls him foolish. Kareena feels Kritika’s sorrow. Kritika is really heartbroken. Kareena can’t see her daughter so upset. She wishes that happiness enters Kritika’s life soon. Karan and Rishabh assure that they will take care of Kritika. Kareena wishes that their loving family stays away from everyone’s bad sight. Sonakshi reaches there to cast her bad sight at them. Keep reading.

Reviewed Rating for Kundali Bhagya 12th November 2021 Written Update Cunning Sona: 3/5 This rating is solely based on the opinion of the writer. You may post your own take on the show in the comment section below.